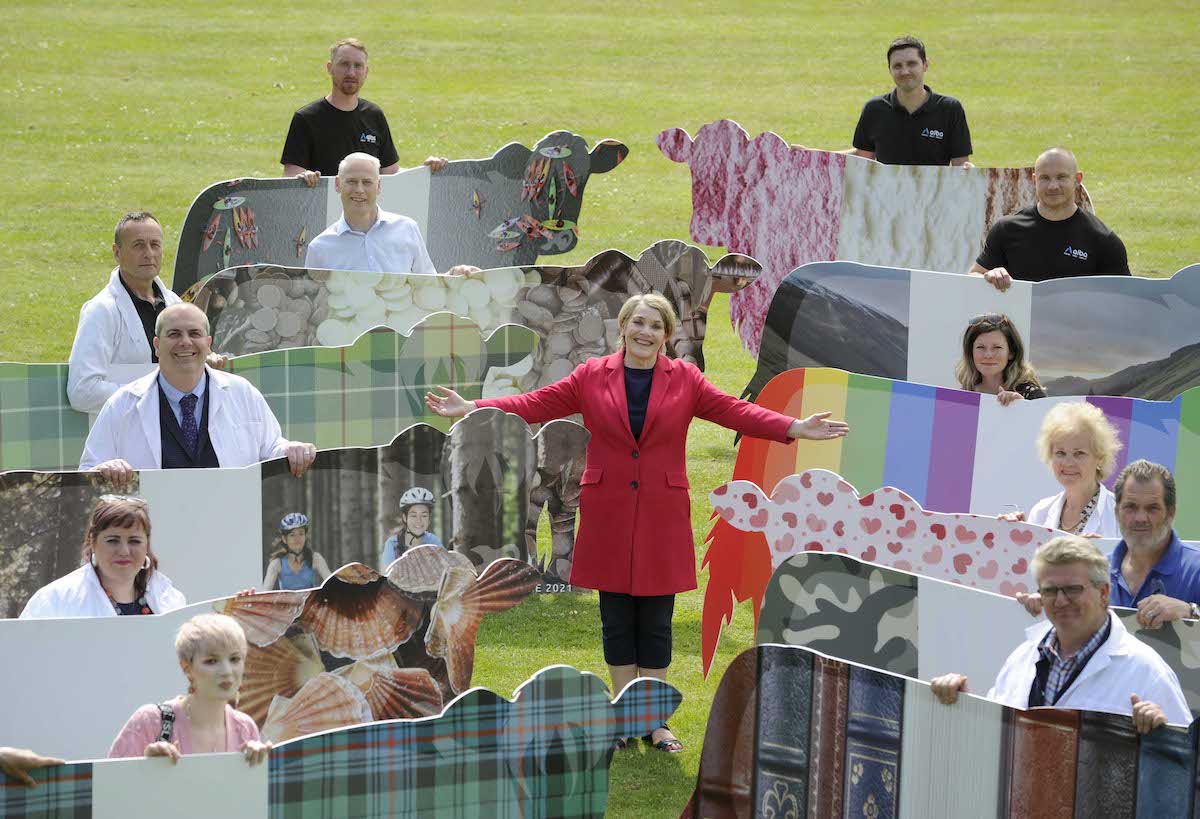 In June one of the highlights of the calendar is The Royal Highland Show, but this year the industry shop window will take place virtually. In the south west of Scotland show organisers have adopted a novel approach taking the Belted Galloway as the image of Dumfries and Galloway.

The show invites you to the south west to snap a “Selfie with a Beltie”, while enjoying everything the area has to offer from ice cream and chocolate to love and literature.

The Royal Highland Showcase arts project features the cut-out cows, created from sustainable materials, which are intended to highlight some of the best that south west Scotland has to offer in food, drink, leisure, culture, society and tourism.

Among them is one Beltie covered in hearts representing Gretna Green, the UK’s weddings capital, one decorated with book covers in Wigtown, Scotland’s National Book Town, and one with scallop shells for the fishing port of Kirkcudbright.

There is also a rainbow Beltie that will be placed near the Dumfries and Galloway Royal Infirmary hospital, Dumfries, in recognition of the work by NHS staff during the pandemic.

The Selfie with a Beltie project is part of a series of arts initiatives designed to make the most of Dumfries and Galloway’s role as “host” region for The Royal Highland Showcase in Partnership with Royal Bank of Scotland. It takes place from 14-20 June.

The Showcase event will replace the annual Royal Highland Show, at the Ingliston Showground and will be live streamed for free.

A different region of Scotland is invited to act as host each year, giving it a chance to highlight its rural economy.

Royal Highland and Agricultural Society of Scotland (RHASS) honorary president, the broadcaster and Lord Lieutenant of Dumfries Fiona Armstrong, said: “We can’t bring the public to the showground, so we are taking Dumfries and Galloway to the world – and there’s no better-loved symbol of the region than our Belties.

“These 12 colourful cut-outs will put the focus on some of the brilliant things our region offers including chocolate and ice cream from our dairy herds, scallops from the sea, mountain biking and kayaking in the hills and lochs – right the way through to romance at Gretna and the bookshops of Wigtown.

“As Covid restrictions ease in the months and years ahead we hope people will enjoy posting pictures of themselves with our Belties, and even travelling around to snap the whole herd.”

The Belties were created and distributed by Alba Printers of Dumfries, with design input from students and Dumfries and Galloway College.

One, the Camouflage Beltie, will be at Ingliston during the Showcase as part of the Veterans’ Garden initiative which involves former military personnel from the region creating a colourful flower garden and a portable display at the showground. After the event it will go to the Veterans’ Garden in Dumfries, which has a children’s play area.

Other arts initiatives taking place as part of the President’s Initiative include:

There are also photographic and cake baking competitions.