Cochrane has been capped for England U20s and has first team experience at the AMEX, he spent last season on loan at Belgian side Royale Union Saint-Gilloise, however an ankle injury saw his loan spell cut short.

Despite Hearts’ rivals Hibernian recently announcing a player development partnership with Brighton, the Seagulls youngster will be joining the maroon half of Edinburgh for the next 12 months.

Former Hearts defender David Weir is on the books at Brighton, currently the club’s loans manager, and he believes a spell in Scotland will benefit the youngster, who was born in Brighton and came through the club’s youth academy, before making his debut in a Carabao Cup tie in 2019.

Manager Robbie Neilson said: “I’m delighted to get the deal done for Alex to join us for the season ahead.

“He’s a very highly-rated player with a good pedigree so I’m looking forward to working with him.

“He’ll provide competition in the left side of defence, and his arrival also gives us the flexibility to change formation should we need to.”

Sporting Director Joe Savage said: “We saw off competition from other clubs to get Alex’s signature so this deal is a bit of a coup for us.

“He’s experienced first-team football with Brighton and also spent a season playing abroad so we know he’s a talented player with bags of potential, and we believe he is the right fit for Hearts.

“Developing links with established Premier League sides like Brighton could be really important for us in the future, so I have to thank them for their assistance with this move.

“It’s been a long process to get this done but we are really excited to have Alex in the building.” 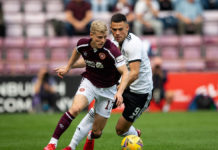