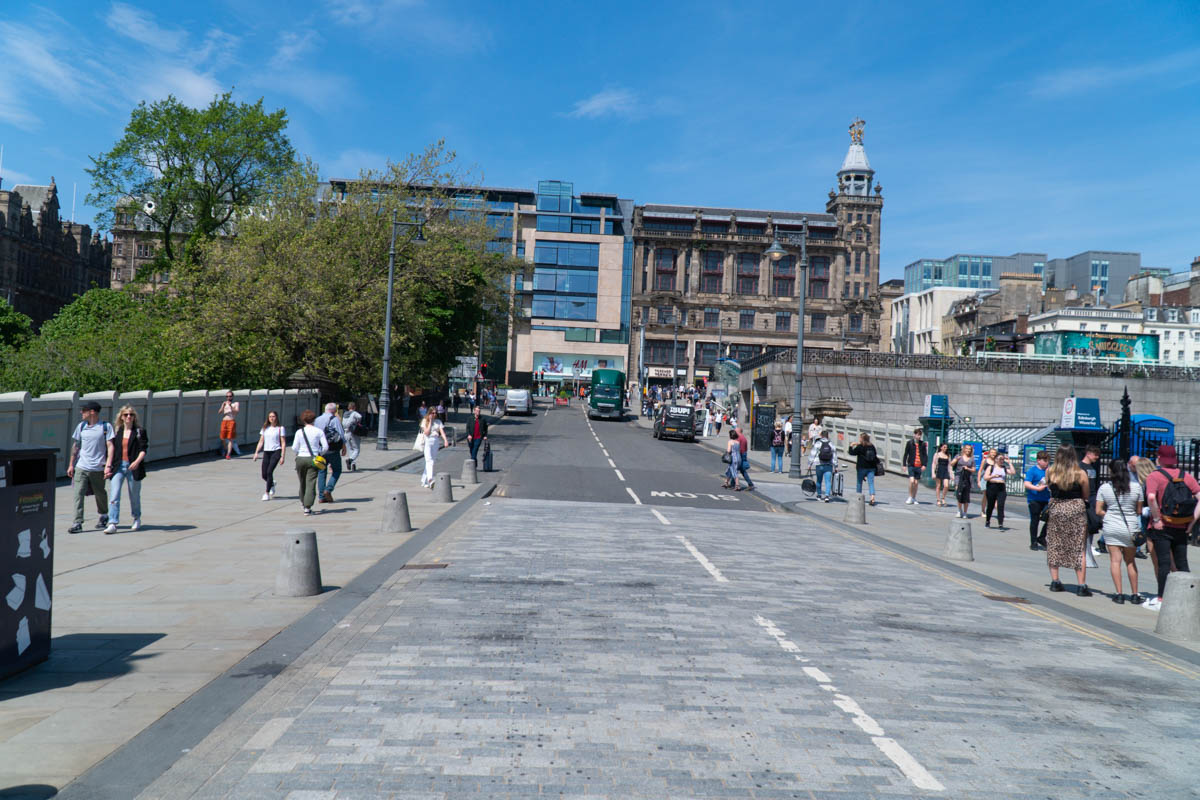 The council will consider what to do about the temporary Spaces for People measures on our streets at their next meeting on 17 June 2021. The options are to keep them all, scrap them all, scrap some of them, or make changes.

The Spaces for People measures were introduced as an emergency response to Covid-19, but the council will also now consider where these sit among their own active travel policies, such as the City Mobility Plan, the Active Travel Plan and the City Centre Transformation, in deciding whether to keep some or none. There is also the council’s aim to become a Net Zero Carbon city by 2030 – and many of the measures encouraging active travel will help to achieve that. Finally there is a Sustainability Plan which will be approved by the Policy and Sustainability Committee soon.The council is also embarking upon setting up 20-minute neighbourhoods where and when they can.

The council recently conducted a public consultation and a separate piece of market research about the various types of measure introduced – around schools, protected cycle lanes, shopping streets, in the city centre, leisure connections and quiet connections.

There are four parts to the decision-making that the Transport Committee has to consider – the consultation, the market research, the recommendation from officers and the context of the council’s own policies. Transport Convener Cllr Lesley Macinnes said that Spaces for People measures “have to be set against the bigger backdrop”.

It is true to say that the council is already pro active travel, so it should not come as a surprise if the administration strives to keep even the best of the schemes, by using further procedures such as Temporary Traffic Orders to which there is necessary consultation attached. We asked the Transport Convener what she might say to those who will believe that no matter how much consultation takes place she will not listen to any opposing views. She replied that the council has a track record of listening and making changes. She said: “We hear the concerns and we find a way of meeting these. As one example – on Dalkeith Road we changed the layout to meet the requirements of Lothian Buses at a narrow section. Regarding these emergency measures, right now in Edinburgh there are hospitality venues which can use streets which they simply would not have been able to do before.”

The Spaces for People measures have already been changed in light of local comment, something which is a main characteristic of the temporary structures. The Transport Convener said that the council put the schemes on the ground quickly and then “we fixed them quickly”. She went on to say that her mailbox has changed a great deal in the last three to four months when more people have written to her saying that they like what has been done. It has to be said that there are also vocal groups who are vehemently against any of the measures.

It is worth remembering that Spaces for People funding came from an initial UK Government policy laid down by Transport Secretary, Grant Schapps, with funding then offered to councils all over Scotland by the Scottish Transport Minister, Michael Matheson. Edinburgh was given £5.2 million to install temporary schemes. Cllr Macinnes also pointed out that 45% of people in Edinburgh do not have access to a car, meaning that it is more important that public transport is not held up by traffic congestion, and that others who can do so, have the best facilities to walk, wheel and cycle. She said: “We are responsible for all road safety issues, but I do detect a different reaction now.”

It is not unusual that there are opinions at either end of the spectrum. Mention the fateful words Low Traffic Neighbourhood anywhere in the UK and there are opposing views, firmly held. In The Guardian today Peter Walker writes that when casting a ballot for the mayoral candidates in London at the beginning of May, the electorate generally voted for those who supported such road traffic measures – particularly in areas where they had been introduced. “Parties who opposed them were likely to shed votes”. Whether that happens here in next year’s council elections remains to be seen. And time will tell whether any of the schemes are retained.

Cycle lanes in London are in general terms a little tidier than some that we have here in the Scottish capital (not all).

Set out in traffic cones first, which were then replaced by black and white wands with orcas to delineate the cycle lanes, there is no doubt that at least in the first iteration, the schemes can appear messy. But contrary to what appears to be a city festooned with segregated cycle lanes, there are only 35 – 40km of segregated cycle ways in Edinburgh where there are 1500 km of roads.

The responses to the consultation and the market research are published today by the council on their website. These documents are also reproduced below.

The main observations from both sources of feedback can be summarised as follows:

The results of the public consultation – which attracted 17,600 responses (180 of whom were businesses and 28 were stakeholders such as Police Scotland and Lothian Buses) – along with the market research will be considered by council officers and a report with their recommendations will be produced next week for councillors to consider the week after.

The number of people chosen in the market research exercise may appear low at 583, but we are advised that this is a demographically accurate and representative sample and so is a balanced group. We are also told that the people making up the group came from all areas of the city.

The council is all too well aware of the tortuous process that it has to go through to get any kind of road traffic measures put on the ground. It is now in excess of five years since the council proposed the City Centre West to East Link which passes through Roseburn. It has still not happened. The council is lobbying The Scottish Government to try and make the whole process a more efficient, less time-consuming one, while still involving the public at all stages.

Cllr Macinnes said: “Firstly, I want to thank all those who took the time to complete the consultation. The changes we have introduced reach across Edinburgh, so we wanted to hear from as many different people in communities around the city as possible.

“Officers have been assessing each of the schemes for retention using a set of criteria agreed by committee and responses to the consultation and market research will be part of this process, helping to form recommendations for the best way forward.

“I look forward to constructive debate with fellow councilors on the future of these schemes, and how they can benefit residents and visitors to Edinburgh longer term.”

Transport and Environment Vice Convener Councillor Karen Doran said: “Over the last year we’ve introduced many measures to help people physically distance and travel safely during the pandemic, and there have been a range of opinions shared on their effectiveness and impacts on the people who live here.

“Thanks to the feedback gathered in March, we’ll now be able to take people’s comments and ideas into account as we assess each scheme, meaning a rounded approach as we move beyond the pandemic.”