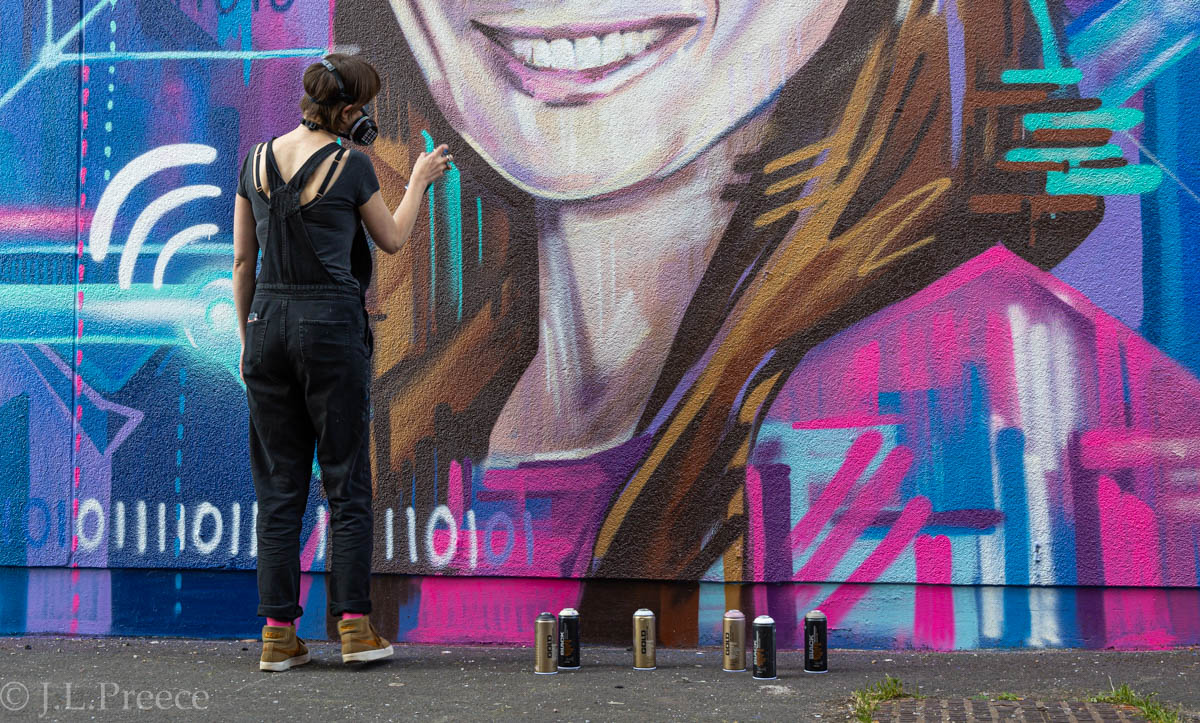 The world’s first, and still Europe’s biggest, Edinburgh Science Festival starts this week and celebrates women in STEM with a large-scale street art trail around the Scottish capital featuring 9 locations, each devoted to a different STEM professional whose passion and knowledge contributed to the world of science, technology, engineering and maths.

The Trail is a visual representation of Edinburgh Science’s commitment to championing women in science and science communication and the fight against the under-representation of women in STEM and the stereotypes that persist, despite many long-standing initiatives to boost young women’s interest. Edinburgh Science is proud to present a Festival where 60% of guest speakers are women.

Dr Anne-Marie Imafidon MBE (Lothian Street – above), the youngest girl to complete A-levels in computing at the age of 11, Oxford graduate at 20 and founder of Stemettes, an organisation dedicated to inspiring and supporting young women and non-binary people into STEM careers.

Helen Sherman OBE (Citadel Youth Centre), first British Astronaut who in 1991 flew on a Soyuz rocket up to the Soviet, Mir Space Station. During her eight days in space, she conducted medical, agricultural and materials and Earth observation work.

Natalie Duffield (North Edinburgh Arts – above), a digital innovator who, following a personal tragedy, decided to not go to university but work and earn – she is now the CEO of InTechnology SmartCitie who provides free WiFi in central Edinburgh, which is a paid for by the company meaning the Council doesn’t have to spend a penny.

Lorna Prendergast (The Space / Broomhouse Hub), a 90-years-old Melbourne University graduate with master’s in ageing who now continues her investigation into the correlation between music and dementia symptom relief via a music therapy trial which started in July 2020.

Dr Kathy Sullivan (Dynamic Earth – above), first American woman to complete a spacewalk (1984, Space Shuttle Challenger), the first woman to travel to the bottom of the ocean (2020, Challenger Deep in the Marian Trench, seven miles below the surface). After the dive, Kathy made a phone call to the International Space Station, marking the two extremes of human exploration.

Dr Helen Senn (Edinburgh Zoo), Head of Conservation and Science at Royal Zoological Society of Scotland (RZSS). Overseeing all 23 wild conversation projects and working as a conservation genetics specialist, Helen supports reintroduction projects for critically endangered species, such as the dama gazelle and the addax.

Zarina Ahmad (Summerhall – above), climate justice and race equality advocate who has been dedicated to increasing participation and improving funding access for under-represented groups.

These inspiring, large-scale portraits have been produced by artists Shona Hardie – known for her portraits of the late DJ Andy Weatherall and the legendary Leith figure Arthur Williams – and Kerry Wilson.

Festival Director Amanda Tyndall said: “Promoting opportunities for women in STEM is a topic very close to my heart and this year not only is our programme packed with amazing women talking about fascinating science but the street art trail takes this message to the streets of Edinburgh and, we hope, will play a small part in inspiring the next generation.”

Dr Anne-Marie Imafidon MBE said: “Two of my favourite things about being a woman in STEM: I can dream something up and create it and I can genuinely solve problems for others using my STEM knowhow.”

Dr Helen Senn, RZSS Head of Conservation and Science Programmes said: “It is always exciting to showcase our charity’s worldwide wildlife conservation work as part of the Edinburgh Science Festival and a real honour to be featured in the Women in STEM Street Art Trail this year.

“Recovering species on the edge of extinction is only possible through collaboration and, with our planet facing an extinction crisis, it is more important than ever before to find ways to break down barriers and empower more people from a wide range of backgrounds to gain the skills needed to protect animals across the globe.”

Geraldine Marais, Trust Secretary at Edina Trust said: “Edina Trust is proud to have sponsored the Edinburgh Science Festival since 2005. Edina’s main aim is to enhance primary science teaching and learning across the UK by supporting schools, science providers, and science festivals. Edina views science as a key part of children’s learning from the start, to make sense of the world we live in, and to provide opportunities to pursue a career in the world of STEM in our ever-changing world. Part of this includes encouraging girls to consider a future in STEM by supporting their learning through hands-on science activities at an early age.”

The Festival’s 2021 line-up features an inspiring line-up of female STEM professionals, authors and explorers from around the world, including, among many others, such names as Prof. Linda Bauld who is an adviser to the Covid-19 Committee of the Scottish Parliament; astronautical engineer Cassandra Mercury; Mya-Rose Craig, an 19 year old prominent British Bangladeshi birder, conservationist and environmentalist whose blog clocked 5 million views; quantum gravity, theoretical physics expert Dr Sonali Mohapatra who is part of the technical team of the upcoming ROKS mission which will be launched in 2022; and Prof. Heidi Larson, founder of the Vaccine Confidence Project and the recipient of this year’s prestigious Edinburgh Medal.

All these events, alongside the Trail, constitute the Festival’s ambitious Women in STEM programme which is dedicated to the memory of Joan Davidson who led Edinburgh Science’s Learning programme for 12 years and stood out for her dedication to inspiring young people to explore, study and develop a lifelong love of science and technology.