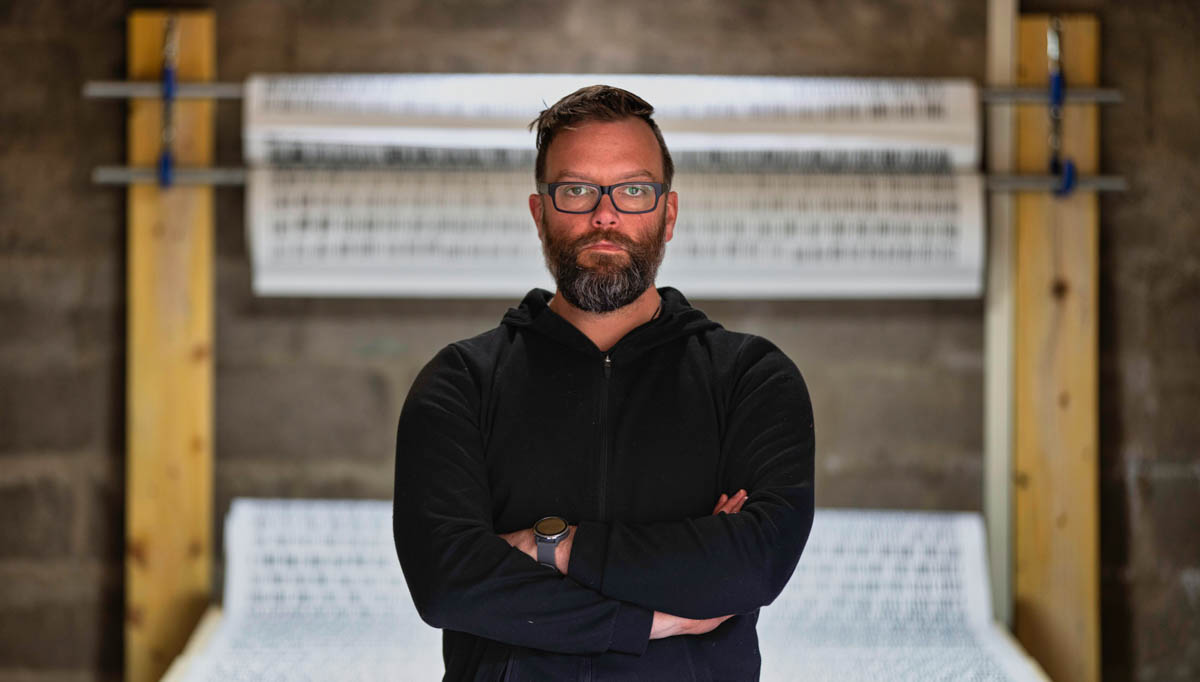 There’s an exhibition opening as lockdown eases, in an unconventional gallery space in a corner of Edinburgh, that might help us to pause and reflect on what has happened before we rush out and enjoy the freedom.

‘Toll’ is an artwork by Andrew Brooks at the new Concrete Block Gallery, which makes a single mark for each of the first year’s reported deaths involving Covid19 in the United Kingdom.

The total reported deaths involving Covid19 for the first year in the UK was 145,652 and this is the number of marks made over 52 performances by Andrew in the space, each performance representing a single week’s statistics.

Andrew began the project online on March 13th 2021, publishing the first performance video on the one-year anniversary of the first reported deaths in the UK, and will complete this work of protest and remembrance on May 13th.

Andrew Brooks said: “There are two elements to the artwork: the physical piece with the marks made on the paper and also the performance of me in the space making the work – I do it in silence and on my own. The performance of this is very much the work part of the work and is just as important as the paper.”

Each mark is made with a single brush dab and is 4cm high and made on rolls of paper 1.5m wide and 10m long. The marks fill 53 metres of paper and have used over a litre of black ink. Each week’s statistics is filmed separately, and the longest film is 3 hours 6 minutes, representing the 6th week of Covid related deaths in the UK which was the highest toll for the year at 9,510.

On the method of making the work Andrew commented: “The act of remembrance is very important in the way that I have gone about constructing this, attempting to recognise each one of those deaths. Understanding what one hundred and forty-five thousand marks looks like and how much time it takes to make those.

Dave MacFarlane commented: “This recent filming project is one of those that come along and you can’t help but take notice. The subject matter, the artistic concept and the wider social impact were all key factors in wanting to produce this short documentary”.

Reflecting on why he decided to make the work, Andrew answered: “When you think about the statistics it easily gets abstracted away but I’m doing this to make it physical and make it so that it can’t be avoided. It’s a visualization that really makes you understand what’s happened, over a hundred and forty-five thousand deaths, you have to realise that this is something to get angry about.

“The impetus for this was anger and that’s what’s fed it. It’s anger at Westminster and at central government. I’ve felt that they haven’t been decisive, they haven’t made strong decisions, there has been a lot of waste, that has resulted in over a hundred thousand deaths. This is a protest piece, this is my version of holding up a placard and standing out in the street – this is my concerted silent protest.”

“Art can have many roles in society, and one of those is definitely protest and this is my protest”.

‘Toll’ will be exhibited for viewings at Concrete Block Gallery Saturday 15th and Sunday 16th May between 11am and 5pm. Viewings can be booked through Eventbrite here: https://www.eventbrite.co.uk/e/toll-exhibition-tickets-153275995629