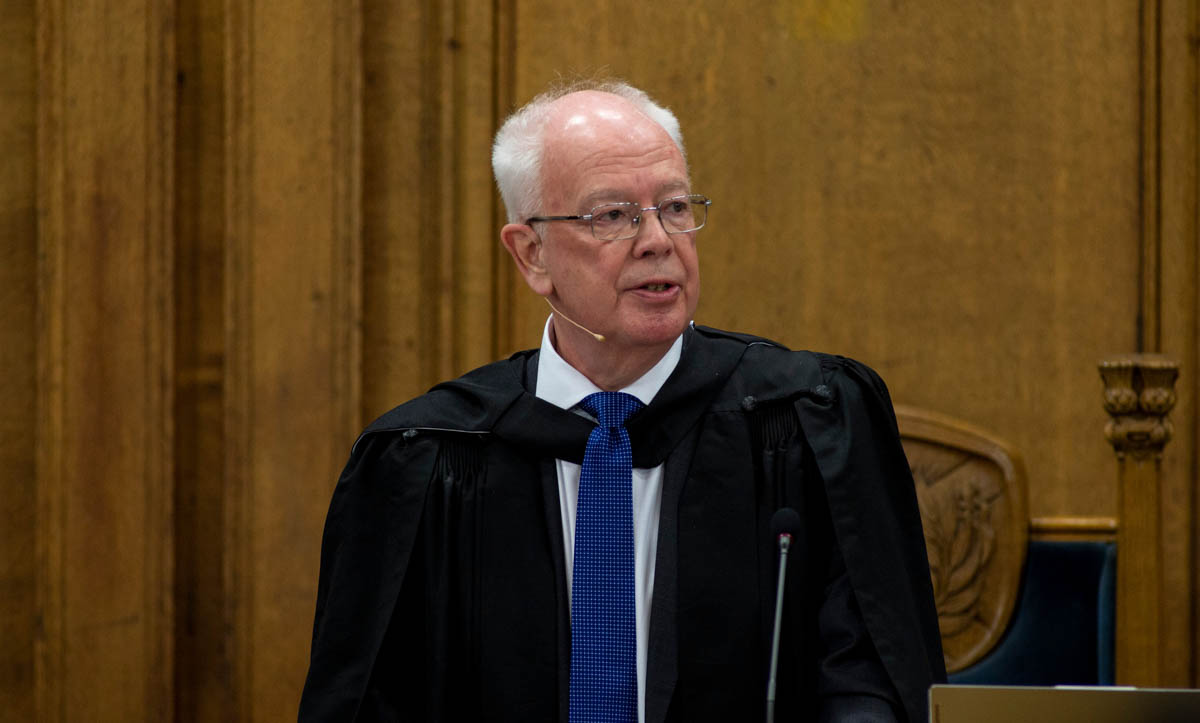 Lord Wallace, the 66-year-old life peer from Orkney, is the second elder in modern times to take up the 12-month role and will speak out on issues important to the Church and its mission to follow and proclaim the example of Jesus Christ.

He was inducted into the role at the Assembly Hall in Edinburgh this morning in front of his wife of 38 years, Rosie, their daughter Helen and his brother Neil who were accompanied by their spouses.

Prince William, who is representing his grandmother, Her Majesty the Queen, as Lord High Commissioner, and First Minister of Scotland Nicola Sturgeon MSP were also present.

Outgoing Moderator, Very Rev Dr Martin Fair, supervised the passing of the cross and chain and ring of office to his successor whose other daughter, Clare, watched online along with hundreds of other people.

Lord Wallace, a member of St Magnus Cathedral in Kirkwall, said: “I thank you most warmly and sincerely for the honour of electing me as Moderator of this General Assembly.

“I stand before you, today, feeling both humbled and honoured and, I should add, with feelings of excitement and trepidation. Upon my nomination as Moderator-Designate, I received many messages of goodwill and many assurances of prayerful support.

“One of my predecessors described her experience as Moderator like ‘being carried along on a carpet of prayer’. Today, I ask for your prayers that during this Assembly and in the coming year, I may fulfil these responsibilities with love, grace and wisdom.

“And that if, or more likely when, I get it wrong, your prayers will be ones of forgiveness.”

The Assembly Hall was the home of Scotland’s devolved legislature for five years after it reconvened in 1999 and Lord Wallace, Lord Steel and Ms Sturgeon all took their oath of office as MSPs there.

A trained advocate and past deputy leader of the House of Lords, the Moderator grew up in Annan in Dumfries and Galloway. His late father John was an elder at Annan Old Parish Church for 64 years.

In his youth, Lord Wallace was a member of the Boys Brigade, involved with Scripture Union and was confirmed in the faith while a law student at Cambridge University in 1973.

“Brought up in a loving Christian home, I was nurtured in a faith which I believe has held me in good stead throughout my life,” he said. “When I was nominated, many people commented to me on the challenges facing the Kirk. Many of these challenges were there before COVID but the pandemic has possibly put them into starker relief.

“They are real but as we meet in General Assembly, I believe we should have confidence in God’s loving power and the inspiration of the Holy Spirit to look forward in faith.”

Lord Wallace quoted “encouraging words” written by Very Rev John Miller, who served as Moderator in 2001-2002. “The task ahead of us is never as great as the power behind us.”

Speaking on behalf of the General Assembly, Lord Wallace thanked Dr Fair for his “inspirational” leadership during a difficult year in office due to the COVID-19 pandemic.

“Fortified by God’s Spirit, you have deployed your remarkable gift for communication to give leadership in adopting and adapting the possibilities of modern digital technology to advance God’s purpose in the Church and in the country,” he said.

“With compassion and empathy you have reached out to people who are vulnerable, especially those experiencing mental health problems during these troubling times. In an extraordinary year, we give thanks to God that we have been blessed with a Moderator who has met the challenge with such extraordinary ability and grace.”

Lord Wallace has moved to the non-affiliated benches in the House of Lords which means he will not belong to any parliamentary group and will cease to take the Liberal Democrat whip.

Dr Fair is returning to his role as minister of St Andrew’s Parish Church in Arbroath, Angus.

Dr Alison Elliot was the first elder in modern times to take up the role of Moderator of the General Assembly, serving in 2004-2005. She is a commissioner this year and will be watching proceedings online.