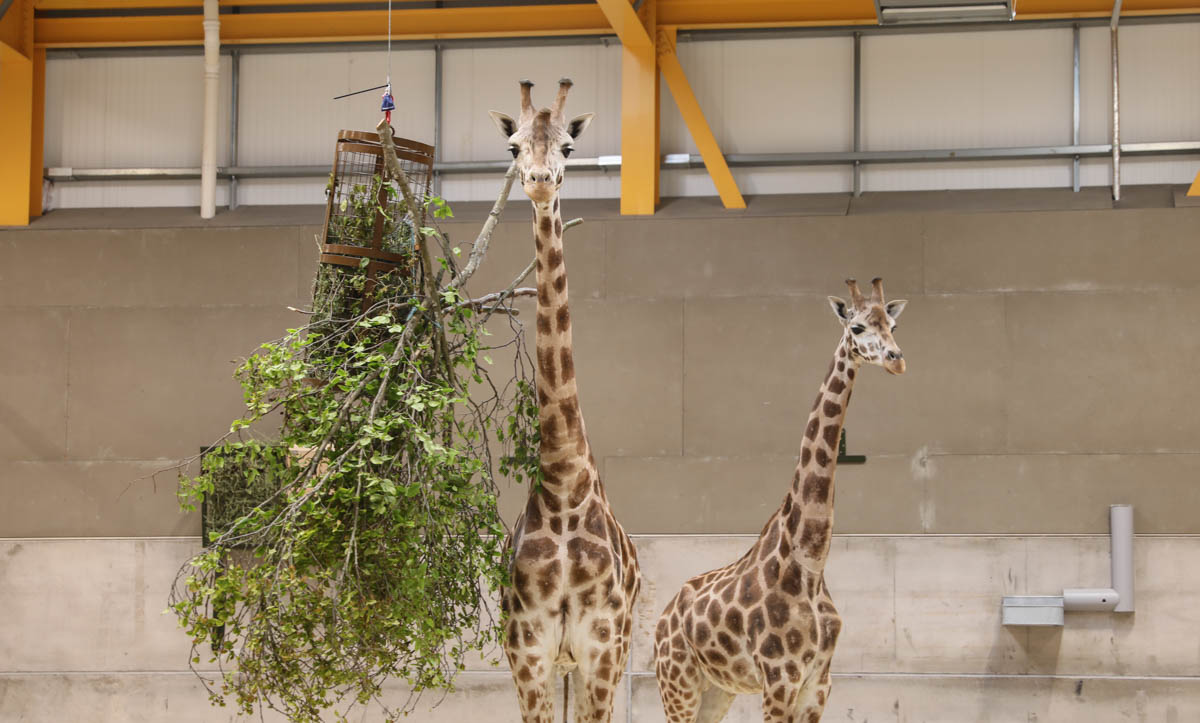 The wildlife conservation charity has partnered with the Giraffe Conservation Foundation (GCF) and Glenmorangie Single Malt Scotch Whisky to bring giraffes back to the capital for the first time in over 15 years and support vital work to protect the species in the wild.

Ronnie and Arrow will have some of the best views in the city from their brand-new hilltop home and will be gradually introduced to visitors over the coming weeks.

Jonathan Appleyard, hoofstock team leader at Edinburgh Zoo, said, “It is incredible to welcome giraffes back to Edinburgh Zoo and we are so excited to start introducing them to our charity’s members, patrons and visitors after they have settled in.

“Numbers of giraffes in the wild have declined by almost 30% since the 1980s due to habitat loss and poaching, so this is a really important opportunity for us to raise awareness and support the Giraffe Conservation Foundation’s work to save the species.

“Our brand-new giraffe house has been designed with high level walkways which means visitors will be able to meet these wonderful creatures face-to-face, giving them an amazing opportunity to connect with nature and be inspired to join us in protecting them from extinction.”

Up to three more male giraffes will be arriving at Edinburgh Zoo in the coming weeks and the newly-formed bachelor herd will need time to bond with each other and get used to their new home before the giraffe house officially opens to the public in mid-June.

Jonathan Appleyard added, “As they are the tallest animals in the world, it is very likely visitors will be able to spot our giraffes exploring their outdoor areas before we officially open to the public.

“We are so grateful to Glenmorangie and everyone who donated to help build our giraffe house and support our partnership with the Giraffe Conservation Foundation.”

Julian Fennessy, co-director and co-founder of GCF, said, “There are only about 117,000 giraffe remaining in all of Africa. Their numbers have dropped by almost 30% in the last three decades. As this decline has happened largely unnoticed, it is now time that we draw more attention to this silent extinction.

“Zoos play an important role in sharing this message and the new giraffe herd at Edinburgh Zoo can play a vital role in raising awareness and funds for the plight of their wild cousins in Africa.”

Thomas Moradpour, President and Chief Executive of The Glenmorangie Company, said, “This majestic creature has long been a beloved symbol of our brand, thanks to our distillery’s giraffe-high stills, the tallest in Scotland.

“These amazing animals are under threat of a silent extinction, which is why we are proud to be official partners of giraffe conservation at Edinburgh Zoo, and to support the work of GCF in the wild.  Through this global partnership, we hope to raise awareness of the plight of the giraffe, and ensure these wonderful creatures remain part of our world for many centuries to come.”

More information about visiting Edinburgh Zoo, the giraffes and how people can help care for the charity’s animals is available at edinburghzoo.org.uk/we-are-open. recovery and beyond.”