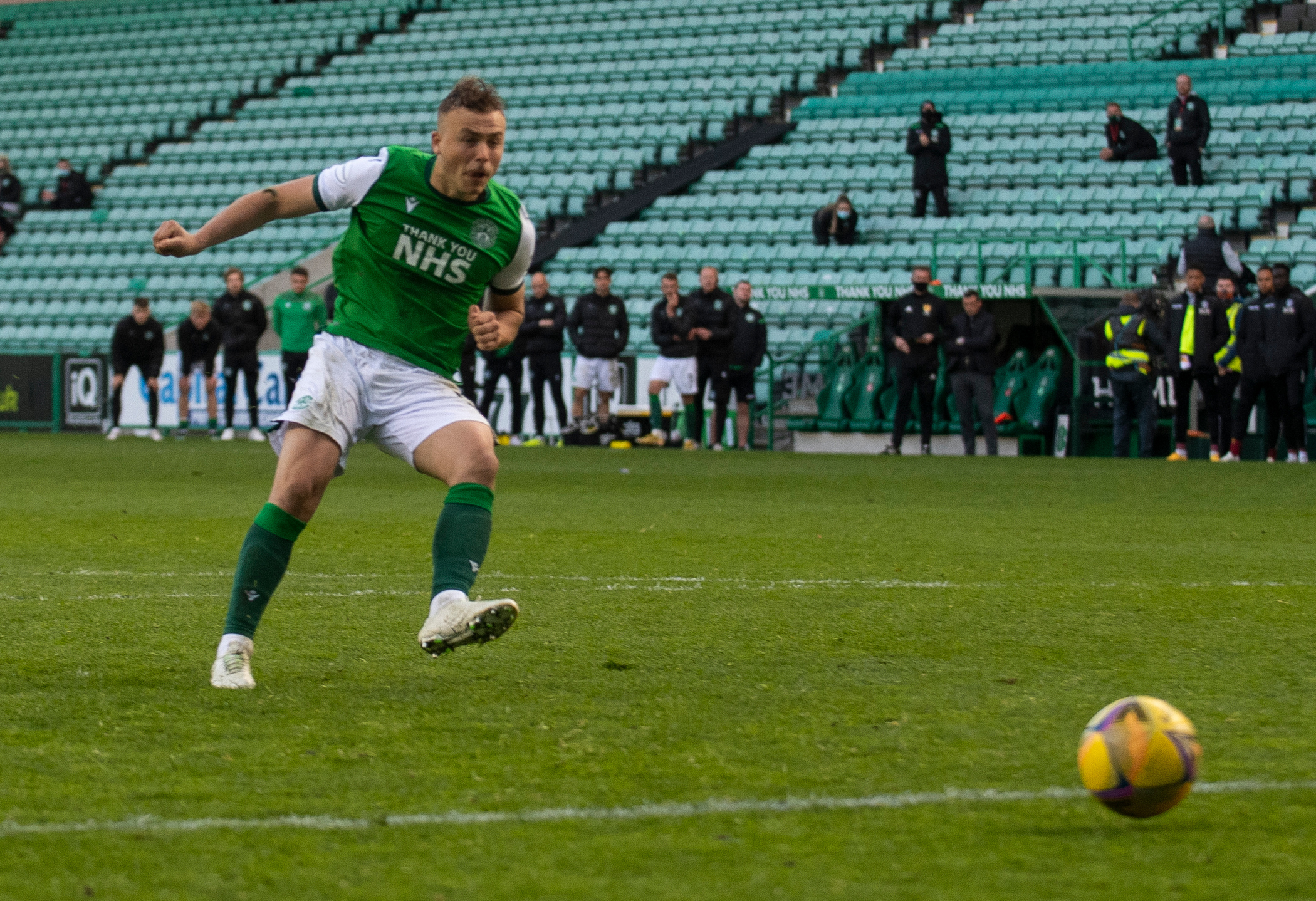 Hibs are heading back to Hampden after a dramatic 120 minutes followed by a penalty shoot out against Motherwell at Easter Road this afternoon.

Hibs looked to have the game sewn up with eight minutes to go and a 2-0 lead but Motherwell scored two late goals to ensure a dramatic climax to the tie.

Head Coach Jack Ross made two changes to the starting XI that beat Livingston in midweek with Matt Macey replacing Ofir Marciano in goals and Josh Doig returning from injury in place of Lewis Stevenson at left back.

Hibs started brightly and Kevin Nisbet displayed some sublime skills in midfield before finding Martin Boyle on the right but his cross was cleared for a corner. Moments later Boyle sent another low cross into the danger area but there was no-one available to take advantage.

Alex Gogic then set up Nisbet but his curling effort went just wide. Nisbet tried his luck once again from the edge of the box bit his powerful effort flew just wide of the post.

Hibs enjoyed the vast majority of possession but the visitors looked dangerous in the break and Ggic did well to prevent a cross from Devante Cole.

At the other end Paul McGinn fired another ball across the face of goal but once again there were no takers.

In the 33rd minute Macey was called into action with a fine save to deny Cole but Hibs continued to press and Jackson Irvine headed a Boyle cross well wide.

Just before the break Gogic was harshly booked for a challenge on Robbie Crawford whose reaction seemed to persuade referee John Beaton that a yellow card was valid.

Doidge almost made in 2-0 moments later when Boyle’s cross was headed down by Irvine into the path of Doidge but he flicked the ball just over the bar on the stretch.

Hibs doubled their advantage in the 78th minute when a Newell cross reached Boyle at the back post. He cut the ball back to Nisbet whose shot was tapped into the net by Irvine standing in what looked like an offside position however the referee awarded the goal.

At that stage it looked as though Hibs were through to the semi-final but Motherwell fought back and Ricky Lamie lobbed the ball into the net.

Newell had a chance in time added on but Liam Kelly managed to save and the game went to extra time.

Melker Hallberg and Drey Wright replaced Doidge and Newell  in the first period and Lewis Stevenson took over from Doig at the half way stage.

With four minutes remaining Boyle had a great chance to win the tie but Kelly produced a superb save to deny the striker.

Nathan McGinlay was booked for a cynical foul on Hallberg in the last minute and the Hibs’ player was also shown a yellow for his reaction. Gogic was also shown a second yellow card for a confrontation with Declan Gallagher and the match went to a penalty shoot-out.

Boyle, Hallberg and McGinn scored for Hibs whilst Mark O’Hara and Stevie Lawless both missed leaving Nisbet with the chance to win the game but his effort was saved.

Christopher Long then scored to make it 3-2 and Ryan Porteous took the responsibility and dispatched the fifth penalty to take Hibs back to Hampden for the Scottish Cup semi-final next month.

After the final whistle Ross told BBC Scotland: “I thought we were really good for 80 minutes of the game. There was a lot of disappointment in not seeing it out.

“We wanted to finish third and win a cup – huge ambition. But we all bought into it, players and staff – and we’ve given ourselves a good chance of doing that.”

Motherwell manager Graham Alexander said: “Every defeat is difficult, but when you’ve played so well, come back from the dead and come so close to winning it, to lose on penalties is galling.

“It’s the nature of the competition. We won the last round on penalties and you have to take the rough with the smooth. All I can say is I’m incredibly proud of everyone in a Motherwell shirt, because they were absolutely brilliant.”