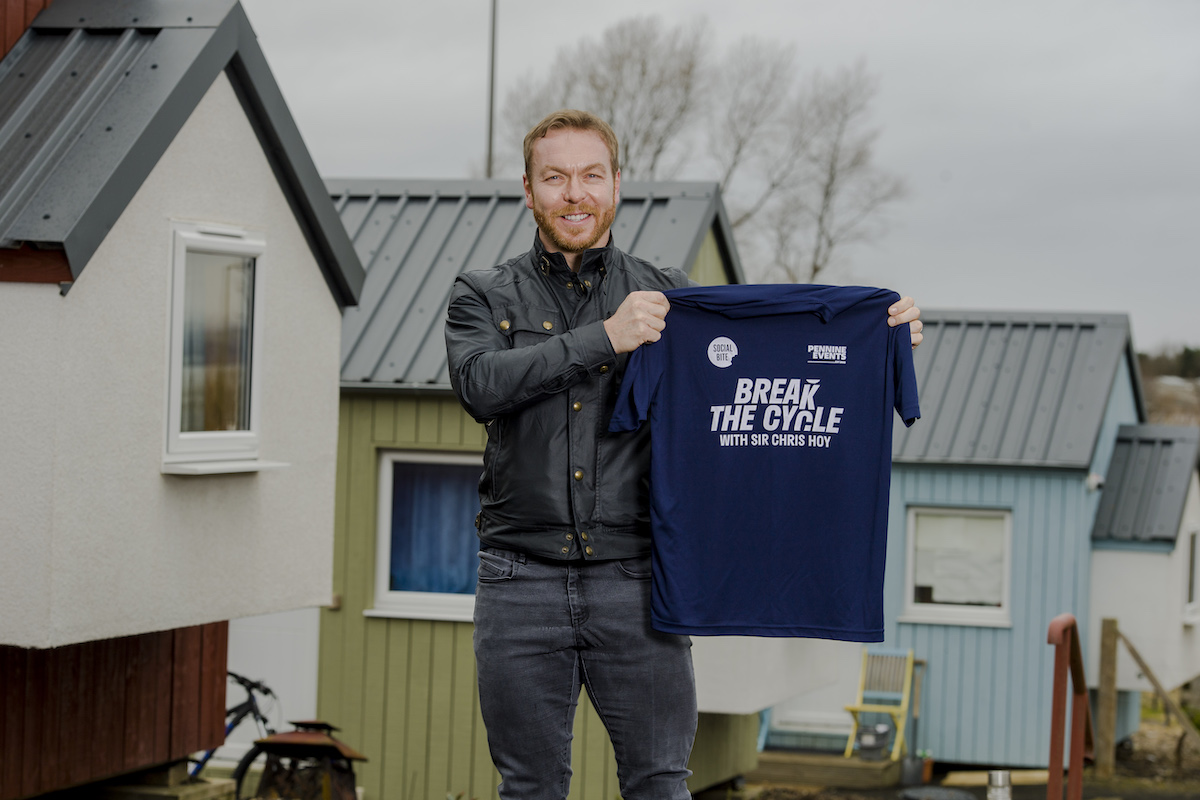 Sir Chris Hoy will undertake a cycle of 60 miles from Glasgow to Edinburgh with 1,000 fellow riders to raise money for Social Bite’s two new villages.

The fundraising campaign Break the Cycle will aim to raise £1 million to help create Social Bite villages similar to the one in Granton in Edinburgh.

The cycle ride will take place on Sunday 5 September from the Sir Chris Hoy Velodrome in Glasgow and finishing near the Social Bite Village in Edinburgh. Each rider taking part will be asked to raise £1,000 for the cause, riding alongside the nine times Olympic champion. All entrants will have the opportunity to name a house at one of the villages and win a signed medal from Sir Chris.

There will also be virtual challenges taking place alongside the cycle ride. Money raised both on event day and in the lead up through virtual challenges will go towards creating the two highly supported communities with the pro bono help of engineering firm Arup.

Social Bite Villages aim to take homeless people off the streets, give them the help they need to lead an independent life. Since May 2018 when the village in Edinburgh was opened the village in partnership with Cyrenians has supported 39 residents/ 82% of those who have lived at the village are either still living there or have moved on to a positive destination.

Josh Littlejohn MBE, CEO and Co-Founder of Social Bite, said: “It’s an honour for us to have one of the country’s biggest sporting heroes support us in our effort to build two new villages for people in a situation of homelessness. Sir Chris has been an advocate of the work we do for some time and when we came up with the Break the Cycle concept, we knew there was only one person we wanted to partner with.

“We’re incredibly passionate about our plans for the Social Bite villages. Since opening the first one in Edinburgh, 39 people have been helped with a home and support through the project. Now that we have seen that the model is working, our ambition is to build more in cities across the country and I’m thrilled to announce that this is our intention in London and Glasgow.

“The money we manage to raise from our Break the Cycle fundraising campaign will allow these plans to become a reality and enable us to develop communities that will have a transformative impact on people’s lives. We’re very grateful to all our supporters, including M&G plc who have already signed up as a major partner.”

Sir Chris Hoy said: “I have supported Social Bite by sleeping under the stars each year at their mass participation sleepout events for the last four years.  I have seen the impact of the funds raised and I am passionate about supporting the bold approach to breaking the cycle of homelessness.

“I know times have been incredibly tough of late but I’d encourage everyone to get involved and help raise the funds needed for this extraordinary project and take on their own challenges over the coming weeks and months. I look forward to see those taking part at the starting line…”