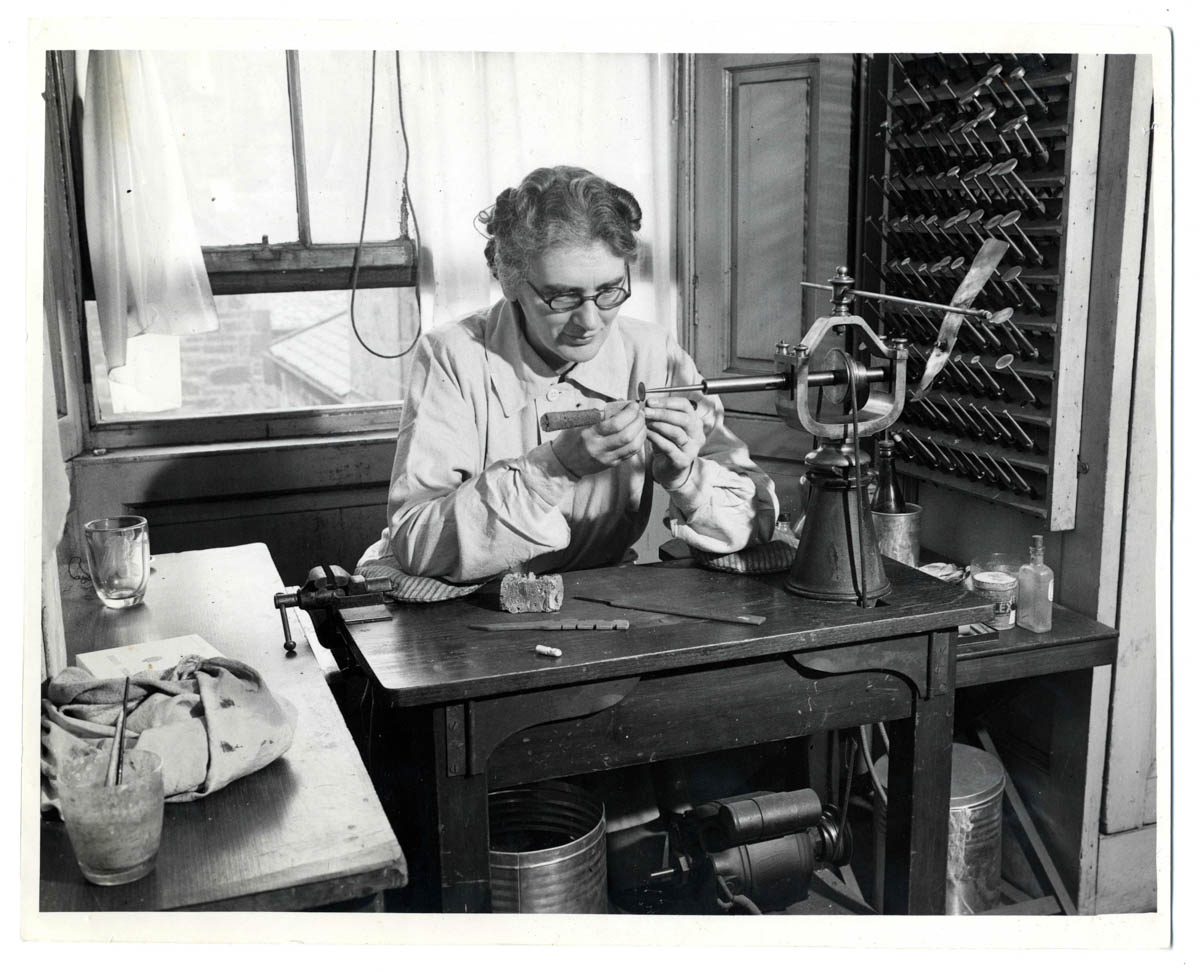 Curators from Museums & Galleries Edinburgh have taken the opportunity to shine a spotlight on a selection of fascinating women from Edinburgh’s past in celebration of International Women’s Day 2021.

Also on the list are Helen Monro Turner (1901-1977) who founded the studio glass department at Edinburgh College of Art chosen by Applied Art Curator, Helen Edwards and Ena Thomson (1907-1989) who served as an Air Raid Warden in Edinburgh’s Air Raid Precaution corps, or ARP during WWII chosen by Collections Care Officer, Gwen Thomas.

The story of each woman is explored and showcased using linked objects from the collection which include: a studio portrait of Nannie Brown, a pair of Ella Morrison Miller’s gold leather shoes purchased from Edinburgh’s well-known department store ‘Darlings’ in the 1930’s and WWII ARP identification papers for Ena Thomson. These objects and many others have been unearthed as part of the ongoing Auld Reekie Retold inventory project which is working to connect Edinburgh’s people to its collections.

From the 8th March, the curators will reveal full details of each woman’s story alongside the items from the collection which connects their own unique history, providing compelling insight into our city’s history from just a few of the women who helped shape the Edinburgh we know today.

The series which is introduced by Councillor Amy McNeese-Mechan, Vice Convenor of Culture & Communities will be shared online via the Museums & Galleries Edinburgh social media channels and website between 8th-12th March.

The series is accompanied by a fascinating programme of free digital lectures and family events including; Scots Women who Chose to Challenge with Jackie Sangster is a Learning Manager at Historic Environment Scotland, Aunts: In Fact & Fiction with Ruthanne Baxter, Museums Manager and Prescribe Culture Lead at the University of Edinburgh, An (Almost) A to Z of Modern Scottish Women Artists with Alice Strang, Senior Curator of Modern and Contemporary Art at the National Galleries of Scotland.

Look Outside, a family craft event inspired by the work of artist Kate Downie and Votes for Women – The Keystone to Liberty, a digital performance from Edinburgh Living History. For full details and bookings visit – www.edinburghmuseums.org.uk/whats-on

Commenting on the series, Councillor McNeese-Mechan said: ‘It is fascinating to learn about how our collections both preserve and mirror the work of women in Edinburgh’s civic and cultural life. This series shines a light on five women who made significant contributions to our city’s history but who sadly are far from well known.

“I hope the stories of these wonderful women will inspire you and I look forward to more discoveries from the Auld Reekie Retold project.”

Helen Edwards, Applied Art Curator with Museums & Galleries Edinburgh said: “Working on the Auld Reekie Retold project has given us the opportunity to research some of the hidden histories behind our collections. It’s been fascinating looking into some of the stories of the pioneering women from Edinburgh, and International Women’s day is a real chance to get their stories out to a wider audience and let their voices be heard.”