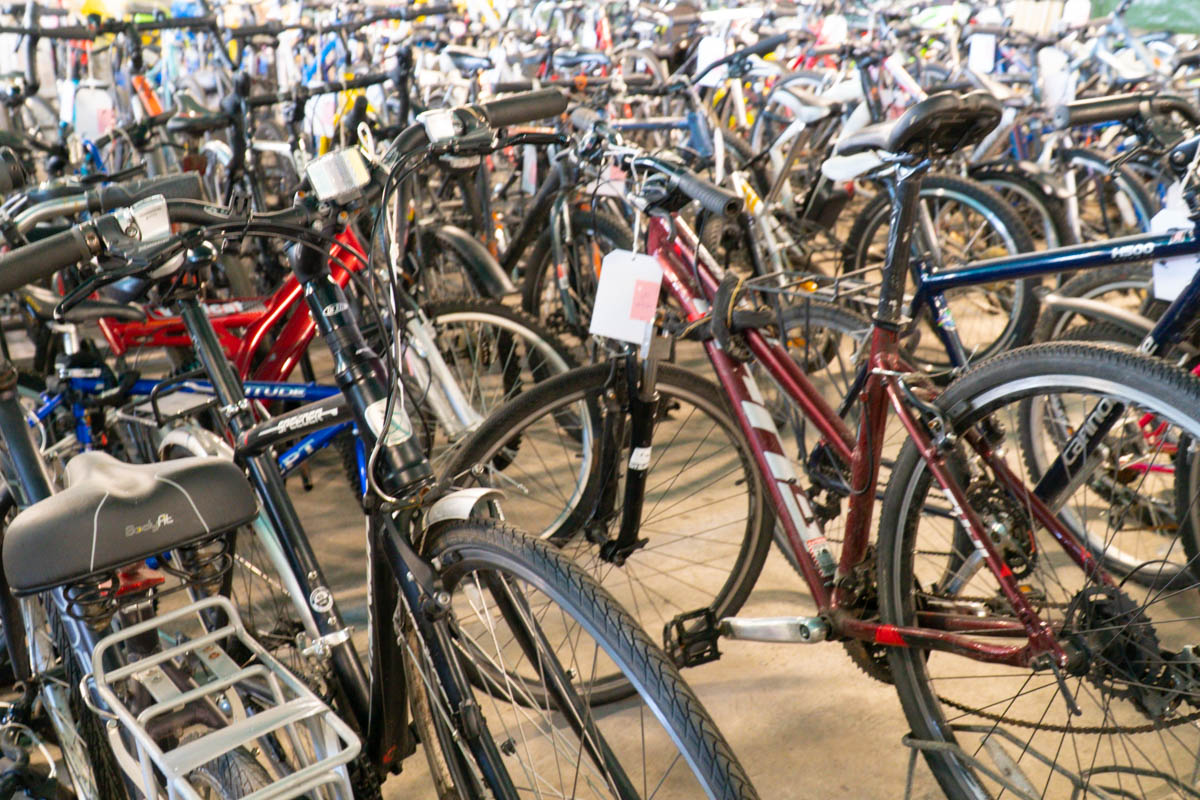 Police Scotland launched a new campaign against bike theft and showed us some of the unclaimed bikes which they have in storage at Fettes.

The message is to get your bike’s serial number and register it on the police database. Police officers also conduct bike marking events which will be publicised on social media. Last year in Edinburgh police recovered bikes worth a six-figure sum but managed to get the vast majority of those back to their owners. At Fettes today we saw many bikes which have still to be matched up, and the key information is to be smarter than the bike thieves. Help protect your bike by following these guidelines:

• Photograph your bike and record all of your bike’s details and distinguishing features and keep in a safe place. The serial number can be found on the bottom bracket.• Register your bicycle securely online at the National Cycle Database, www.bikeregister.com Doing this may help to recover your bike if it goes missing. On registering, you can also download a bike logbook where you can record your bike’s details to keep at hand.• Security mark your bike’s frame with a UV pen or other method – the mark should include your home postcode and house number.• Insure your bike, either on contents insurance or separately if required.

There are forms here to download and record information about your bike or motorbike.

Detective Superintendent Matt Paden said we know the impact that the theft of a bike has on owners. It causes great distress and can have a significant impact on people’s ability to commute exercise and get outdoors. There is also a financial implication – particularly where the bike is not insured. It is not a new crime and on a daily basis police officers respond to this crime.

“We believe that given the increase across the country in bike thefts that a national campaign of enforcement and awareness raising is required. There is a more targeted approach to bike theft. Various specialised bikes and electric bikes are being stolen to order.

“Bike owners should consider their own security measures. We will be putting out tips on social media and bike retailers will also provide security leaflets.”

Chief Inspector Neil Wilson is responsible for Partnerships in Edinburgh Division. He told us about the success the police have had in finding bikes in the last year.

He said: “It is certainly a challenging situation. Once a bike is stolen there are many routes for it to be disposed of. We established Operation Agora which is a specialist unit with investigatory experience and also experience of local officers of who is active in the area.

Mark Beaumont said: “I have been a lifelong cyclist and I think it is fantastic to see the new cyclists of all ages out there, but the unintended consequence of more cyclists and more bikes is more bike crime especially top end bikes and expensive bikes. Considering what they cost and how much people care about their bicycles to then take the extra steps in terms of how you secure them and look after them and then if the worst is to happen, identify them when they do get stolen.

“When bikes are stolen even if they do get reported on the day of the crime then having the process to follow up a week later to see if it has been handed in, and having the process to suitably identify your bike – it might sound very obvious. But to just say it was a red one won’t do – you need to have a look take a photo of the serial number, jump on the Police Scotland website, register it and it is an incredibly simple process to get peace of mind. It also helps with your insurance.”

Police Scotland recommend Bike Register who were kind enough to mark The Edinburgh Reporter’s bike which is now entered on the national register. The police offer this service free.