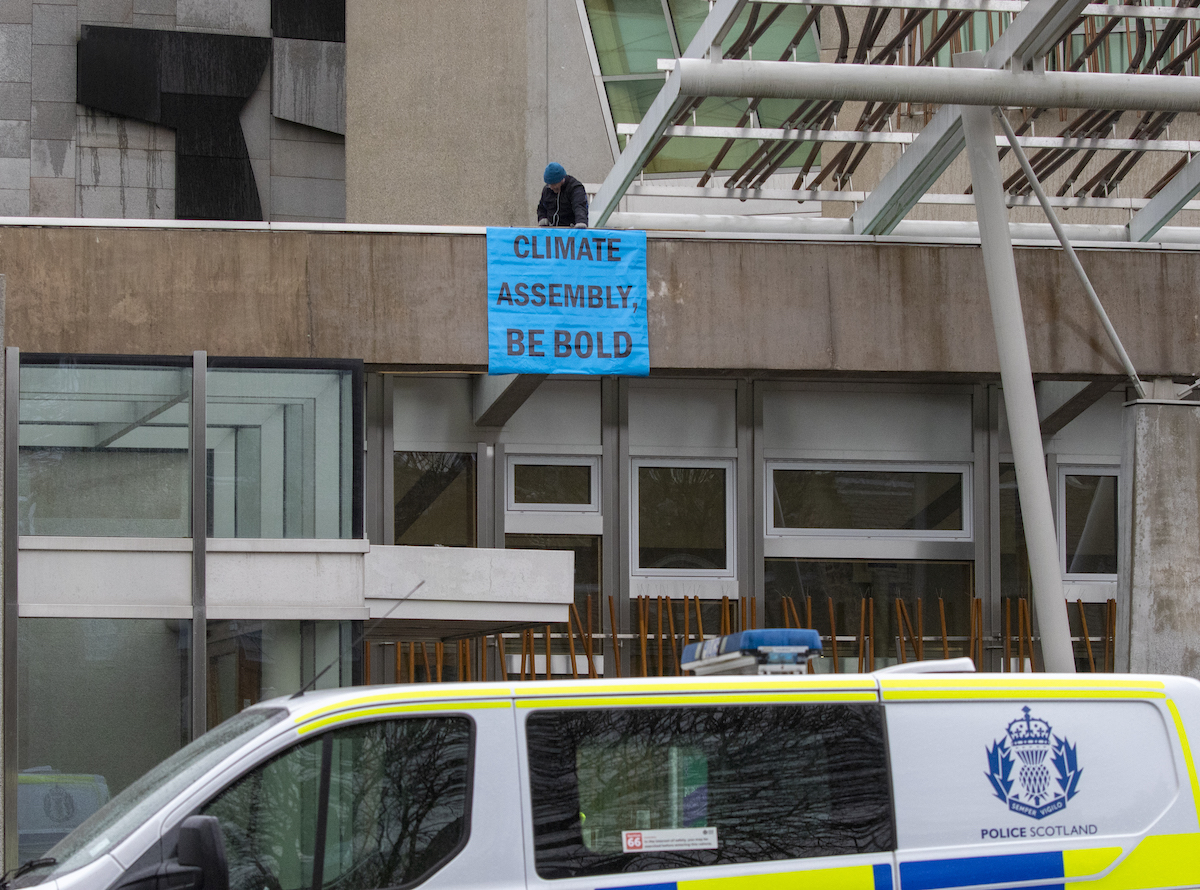 A member of XR Scotland scaled the roof of The Scottish Parliament this morning and dropped a banner reading: Climate Assembly, Be Bold.

Today, XR Scotland releases a video summary of the evidence heard at the assembly highlighting a key dilemma from experts: the current system cannot respond appropriately to the climate emergency.

XR Scotland say they ask assembly members to be bold.

Scotland’s Climate Citizens Assembly is about to enter its sixth weekend, with an additional seventh requested by 85% of assembly members. They have been tasked with responding to the question, ‘How should Scotland change to tackle the climate emergency in an effective and fair way?’

Extinction Rebellion Scotland was originally part of the Stewarding Group, but pulled out because they felt that those with an interest in maintaining the status quo were frightened of rocking the boat, and were not allowing the Assembly to hear a wide enough range of evidence. XR wanted assembly members to be supported to decide how serious the emergency is, assess the systematic drivers of the crisis, and decide the level of transformation required.

Justin Kenrick, one of the former members of the Stewarding Group commented on one glaring issue with the evidence brought to assembly members: “There was never any evaluation of the seriousness of the climate emergency. There was a lot of focus on being fair to different sectors in Scotland but not fairness to those elsewhere in the world suffering now or to future generations. To be fair in that fundamental way you have to first assess how serious the emergency is, and the assembly never collectively had the opportunity to do that.”

A spokesperson for Scotland’s Climate Assembly said: “Scotland’s Climate Assembly has deliberated on a broad range of robust and complex evidence over the past several months. This evidence gave a clear picture of the severity of the climate emergency. Our members – more than 100 people from all walks of life across Scotland – are now working hard to agree their recommendations for how the country should tackle the climate emergency in an effective and fair way.

“Of course we welcome a lively public debate on these vital issues. The Assembly operates independently, following a rigorous process based on international best practices for participatory democracy, and it is for members alone to decide their recommendations. The Assembly benefited from input from Extinction Rebellion early on in the process as members of our stewarding group and it was disappointing when they chose not to continue with this role.”