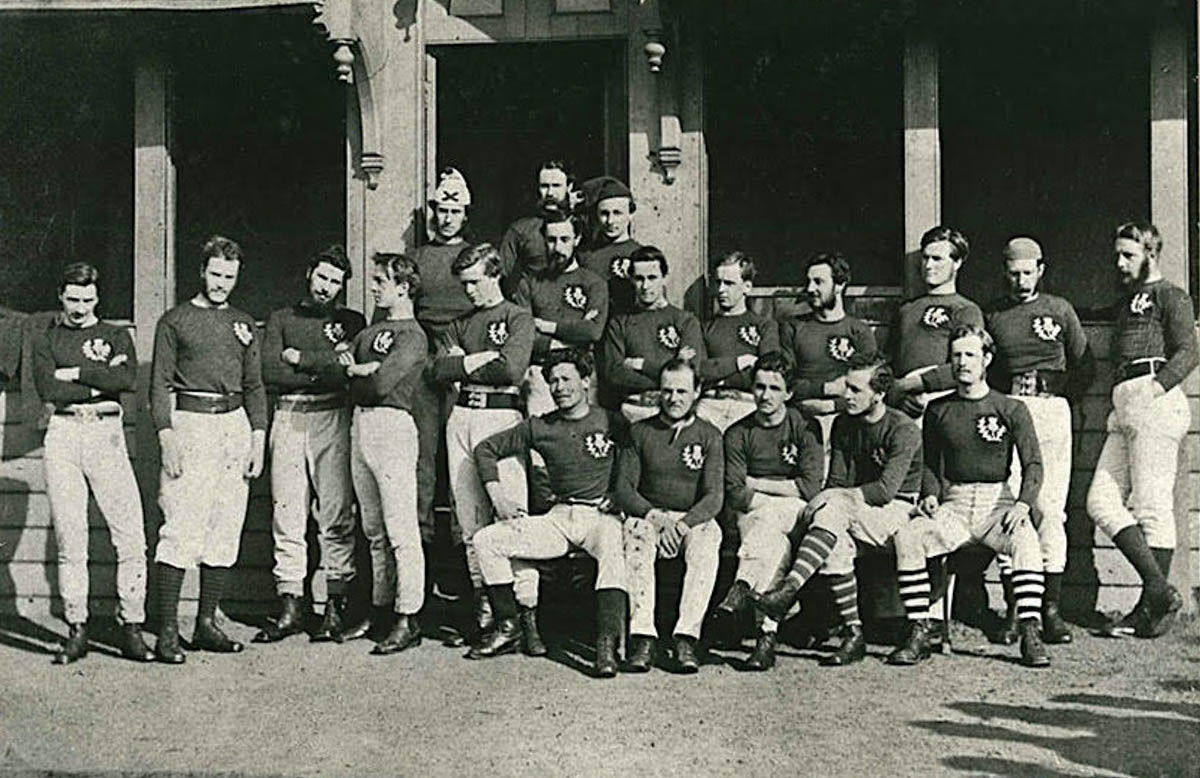 The 150th anniversary of the first ever game of International rugby, which saw Scotland beat England at Raeburn Place in Edinburgh on 27 March 1871, will be marked on 27th March.

The 150th anniversary will be marked by a photoshoot with Scotland head coach Gregor Townsend and assistant coach Mike Blair as they bring the Calcutta Cup to Raeburn Place, the birthplace of international rugby, on their return from Paris.

The Raeburn Place Foundation (RPF) charity is also pleased to announce that filming has begun on The Great Game, an hour-long documentary that relives the events of 1871 and explains how that game between Scotland and England changed the face of sport forever.

This film will be a centrepiece of the Museum of International Rugby, which is the second phase in the ambitious redevelopment of Raeburn Place which has already seen over £10 million raised and spent. (For drone footage of Raeburn place, see https://vimeo.com/526956570/73403e13a6)

During the making of The Great Game, film director Magnus Wake and rugby journalist/author Richard Bath are interviewing some of the biggest names in rugby for a documentary which explores the social, political and sporting background to one of the most seismic days in sporting history. (90-second trailer).

The documentary has been financed by individual donors, donations from the GPS Macpherson Charitable Trust and the Gordon Brown Memorial Fund, and corporate sponsors Famous Grouse and Brewin Dolphin. However, as a charity the RPF have also been keen to allow all rugby fans to support this project so have launched a crowdfunding campaign where fans can have their name added to the credits for as little as £50. For more information see www.crowdfunder.co.uk/the-great-game-documentary

The Raeburn Place Foundation is also launching an appeal for anyone with rugby memorabilia such as photos, diaries, jerseys and caps to come forward. Several important items have already come to light which will appear in the Museum of International Rugby and feature in The Great Game documentary.

Speaking about the project, Alastair Graham of the Raeburn Place Foundation said: “The 150th anniversary of the first ever rugby international underlines just how important Raeburn Place is in the history not just of international rugby, but of sport.

“Raeburn Place is one of sport’s hidden cultural and sporting shrines, and many people don’t yet appreciate its significance. The redevelopment of the ground will not only put it back at the centre of the community, promoting sport and heritage, but will also consolidate its unique status as the birthplace of international rugby.

“The commissioning of The Great Game documentary is a tangible sign of Raeburn Place’s renaissance, and marks the start of the next stage of our project – the Museum of International Rugby, at the ground where it all began.”