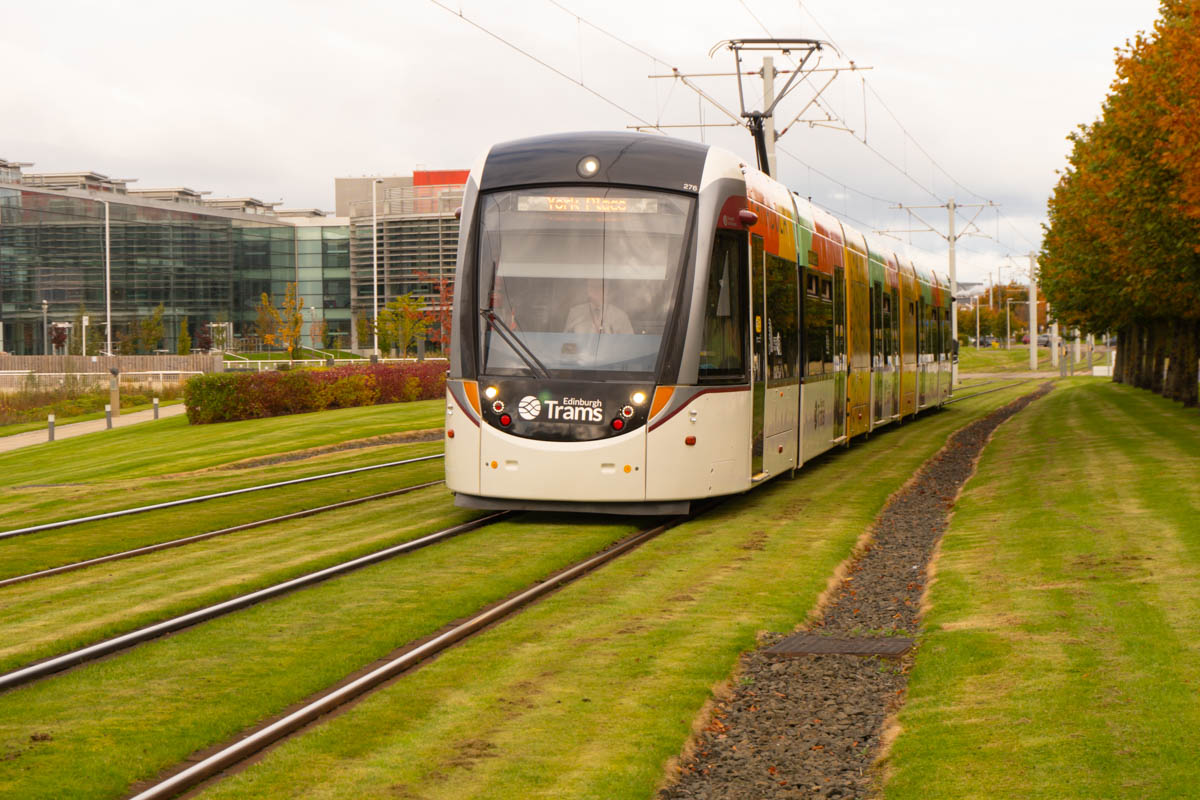 It makes recommendations for investing in transport choices in the next few years and some of these are right here in Edinburgh.

Scotland’s investment plans may include Edinburgh’s Mass Rapid Transit system, including extensions to the tram network, and its potential to support the region’s economic growth and carbon-neutral ambitions. There is also a possibility that integrated ticketing would be introduced by the government to help any connection between Granton and the south east of the city boundary, something which the council has long wanted, but which is in the gift of the government.

The tram, even with the extension already being constructed to Newhaven, will offer a choice of travel options between the city and workplaces in the Gyle and at Edinburgh Airport. At a media briefing some time ago on the then proposed Tram to Newhaven, it was explained by council officers that this will become a main commuter route for those living in Leith and working at the Gyle.

The report also states that any further extension could result in increasing frequency of mass transit services to Edinburgh from neighbouring local authorities, or introducing a south suburban railway within the city and a cross-Forth Light Rail Transit system to Fife. This means the South Suburban Railway which used to take passengers, but is now exclusively a freight line. The Scottish Government says it recognises the need to deliver a step change in travel behaviour and to provide sustainable options.

This aligns with the Transport Secretary Grant Shapps MP who told the UK’s Transport Committee on 3 February 2021 that the government wants half of all journeys to be either walked or cycled by 2030 to meet the proposals in the government’s decarbonisation proposal and that there is £2 billion set aside for that.

Mr Shapp’s statement accords with the announcement by the Prime Minister in the summer last year of a government plan called Gear Change which “aims to build on the significant increase in the number of people cycling during the pandemic. It sets out a comprehensive, long term vision to increase active travel and embed the benefits of walking and cycling into how we live, work and get around.”

It is clear that in the face of a Climate Emergency that The Scottish Government and The City of Edinburgh Council have similar aims. The City Mobility Plan is expected sometime in the first half of this year and is a “ten-year strategy that sets out proposals to transform the way people, goods and services travel around the city”.

Transport and Environment Convener SNP Cllr Lesley Macinnes said: “The need to invest in sustainable and accessible transport is essential for our city’s green recovery from the Covid crisis, and to meet our long term goal of carbon neutrality by 2030.

“This report acknowledges the central role clean, integrated transport will play in the city and region’s economic development, improving the environment and progressing social equality amongst the people who live here.

“Amongst the schemes highlighted, the progress of mass rapid transit is key to our forthcoming City Mobility Plan, supporting people to make convenient, sustainable transport choices as well as connecting to areas of future growth. Support in this Scottish Government report for reallocation of road space for walking and cycling, expanding on work through our Spaces for People project, City Centre Transformation and our ongoing, ambitious active travel programme, will help us create a truly people-friendly city.

“I’m very pleased that STPR2 recognises and builds on the importance of these strategic projects, as well as highlighting the effectiveness of our 20mph roll-out, and will be of great support as we work towards a greener, fairer future.”

Transport Vice Convener Cllr Karen Doran said: “We’re already focusing on a great many schemes to support sustainable transport, from measures to prioritise public transport and investing in Trams to Newhaven to major cycling and walking improvements around the Capital.

“The themes and recommendations within this report very much reflect and bolster our own aspirations to encourage modal shift away from private car journeys, responding to the climate emergency, minimising air pollution and supporting healthy lifestyles. We look forward to working with Transport Scotland to progress the recommendations, to the benefit of the city.”

South Suburban on the way?

As well as a focus on the tram, as we have said above the Transport Scotland report makes fleeting mention of the South Suburban Railway.

This was brought to the Transport Secretary, Michael Matheson’s attention at Holyrood by Daniel Johnson MSP last November, and on several occasions prior to that. Mr Johnson said then that he had a copy of a study into the economic impact of reintroducing the South Suburban which he referred to. He said: “The study was clear that such a project would have a net present value of between £13 million and £27 million, and it acknowledged that the estimate of the benefits was probably cautious. Since then, the trams have commenced and outperformed their financial projections and the Borders Railway has opened and outperformed its financial projections, which undoubtedly means that the south sub loop would be a more successful project were it to reopen.

“Will the Minister commit to making sure that any study looks at the synergies between those projects? I look forward to The Scottish Government getting on board with the south sub loop next autumn.”

Mr Johnson wrote a column for our December 2020 newspaper about the South Suburban Railway:

“The Covid pandemic has become a permanent fixture of all our lives this past year. Whether it is in the news or indeed in our street, we are seeing its effects daily. It has dealt us a bloody blow but we are now at least starting to hear optimistic vaccine developments. This situation we find ourselves in will not last forever and we have to look forward to what comes next.

“The societal damage to health and wellbeing must be considered but what is just as important is our economic recovery.

“So many thousands of jobs have been lost or are under threat. A major boost for the economy in Edinburgh just waiting to be utilised is the Southern suburban rail line.

“You may not be aware of it, but currently there is a double track railway line that circles the city but is not open to passengers. Apart from freight, this untapped resource lies empty and grossly underused.

“A report compiled for the Council back in 2004 concluded that opening the line up to passengers would have a positive net financial value of between £13 – £27m and it is clear from conversations I have had that there is local support for it.

“I had the opportunity to ask the Transport Secretary directly about this in the Scottish Parliament who intimated it will be part of the strategic transport review, which is due to report next autumn.

“I welcome this inclusion and look forward to doing my part to raise awareness.

“The Scottish Government need to get on onboard the South Sub Loop and support the Edinburgh economy.”

At Holyrood in November the Minister for Transport Michael Matheson said in reply to Mr Johnson: “No strategic transport project sits on its own. The project needs to be considered alongside other interventions that can help to improve transportation across Edinburgh and the Lothians as a whole, and consideration must also be given to how they will be integrated into the wider transport system across the country. That is why it is so important that we have a process that brings these things together, so that we can prioritise them on the basis of what is necessary. The STPR2 process is the way in which we do that.

“The elements that the member has raised have been considered in the drafting of the pre-appraisal work and are now being considered by the regional transport working groups. They will look at what the priorities are and at whether those options can be further developed.

“I encourage the member to engage with the regional transport partners to explore the proposal further. Clearly, as we move forward with STPR2, the proposal could fit into the wider range of work that will be necessary in Edinburgh and the Lothians as a whole to prioritise what strategic transport interventions are needed to improve transportation across the region.”

Single to Morningside anyone?