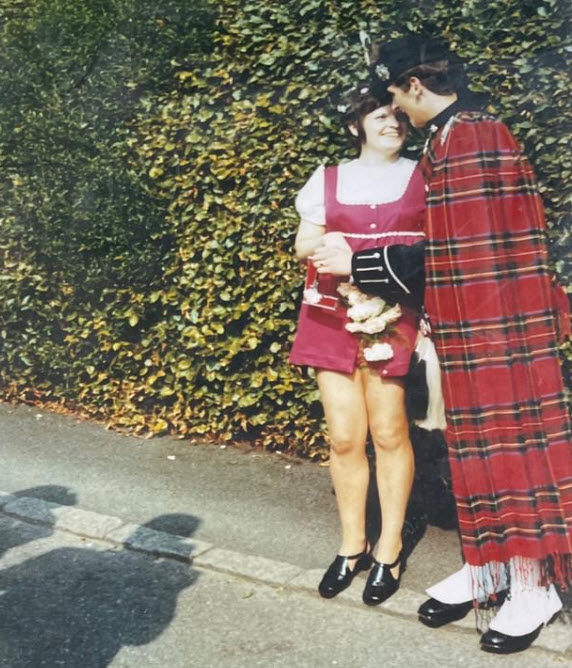 After meeting at The Royal Edinburgh Military Tattoo it was love at first sight for two performers who were married just six weeks later. Now the couple share their secrets to married bliss as they approach their 50th wedding anniversary.

Piper, Andrew Gilmour, 69, and his wife Sue, 71, who was a dancer were both performing at the 1971 Tattoo, with The 1st Battalion The Royal Scots Pipes and Drums.

An extra dancer was needed for a dance set in the show. Enter Sue. When she was chosen to take part the two were coupled up and it was love at first sight across the iconic Edinburgh Castle Esplanade.

After a whirlwind romance, the pair marched and danced their way down the aisle, in a small ceremony in South Queensferry on 9 September 1971. A surprise reception was then laid on by the Army at Craigiehall Barracks when they had a Guard of Honour from the Gordon Highlanders kitted out in traditional dress.

The couple, who now live in East Calder, West Lothian, had no time for a honeymoon as they returned to perform at the Tattoo the next day. But, during one performance after the wedding they were announced to the audience as newlyweds. This was part of a performance by the Royal Artillery Motorcycle Display Team and Sue made her way down the Esplanade on the back of a motorcycle.

The couple have three children and six grandchildren, all of whom live locally.

They say that laughter, compromise, a willingness to discuss everything and tackle tricky situations as a couple are the key to a long and successful marriage.

Speaking about the 1971 Tattoo performance when they first met, Sue said: “It was fate when they needed an extra dancer, I actually had no Scottish country dancing experience, but I put my hand up and learnt the whole routine within a week.

“It was backstage after the Show when I eventually got to speak to Andrew, and I knew within half an hour that he was the one. I told my friends, that’s the man I’m going to spend the rest of my life with.”

Andrew also recalled that instant connection the couple felt. He said: “Everyone around us was saying it was too quick and it’d never last, but 50 years later, here we are. We started courting and within six weeks we were married. The army laid on a surprise reception back at the Barracks, filled with fellow Tattoo performers and incredible food made by the army chef, it was just perfect.

“Sue is originally from Plymouth so wasn’t able to have any family at the wedding and we had no honeymoon because I was immediately off on tour to Ireland afterwards.

“I can still remember getting back from that tour and visiting my wife’s parents for the first time – six months after we’d married!”

Andrew eventually left the army due to injury. He became a bus driver, but his connection to the Tattoo didn’t end, as he took a job transporting performers at future Tattoo performances.

The Tattoo holds a special place in the hearts of the couple and they’ve since been back to see the show five times, celebrating their 40th anniversary with tickets to The Royal Gallery.

While their love story is indebted to the Tattoo, the pair have some advice for young couples hoping to follow a similar path to married bliss.

Sue said: “The Tattoo is so important to us. We’re so lucky to have met the way we did and so proud that our lives have such a strong link to the amazing show but despite the way we met, there’s no big secrets to a long marriage.

“In terms of advice to others, I think a key thing has to be attraction. When I first saw Andrew, I thought he was the most handsome man ever.

“Laughter is also the best medicine. Andrew makes me laugh every day. And I’d tell people to listen and make decisions as a team. We always discuss things and neither of us would go off and make a big decision without speaking to the other first.

“A little bit of romance also goes a long way. He’s always been very romantic and when he gives me his cheeky wink, I just fall in love all over again.”

The couple are already excited about making a return to watch this year’s Tattoo performance and plan to take their two eldest grandchildren, Holly, 18, and Lewis, 14, with them, to show them how they first met.

Buster Howes, CEO of The Royal Edinburgh Military Tattoo, said: “The Tattoo holds special memories for many people, and it is wonderful to hear such heart-warming stories from our audiences and performers.

“We are delighted that the Tattoo has played such an instrumental role in Andrew and Sue’s lives, as well as many others.

“For anyone who doesn’t believe in love at first sight, they just need to hear this tale to know that it does exist. I’m thrilled they’re celebrating their 50th wedding anniversary this year with us.

“We look forward to welcoming them to the Show this year and sharing it with their family.  We’ll make sure it is a very special experience.”