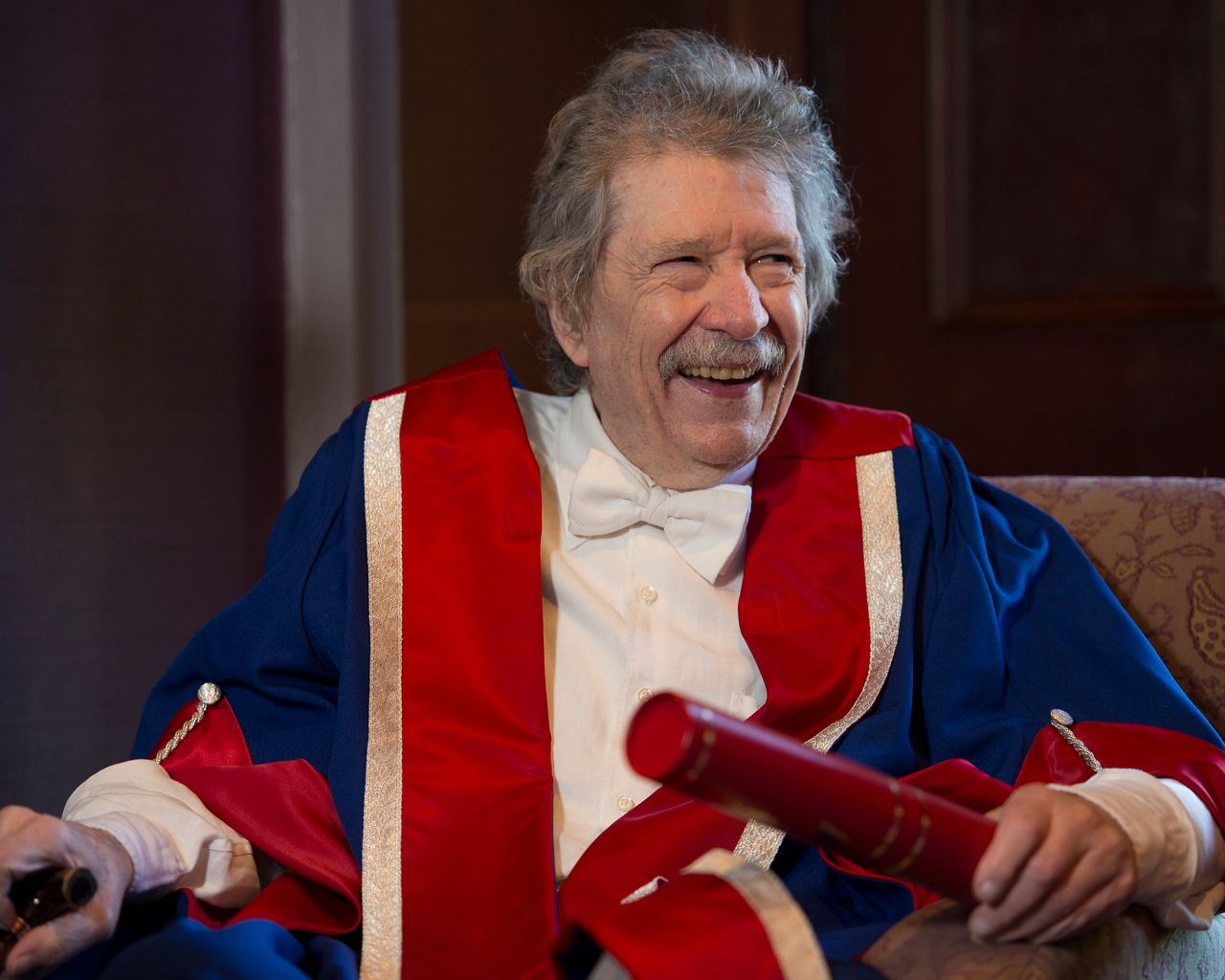 Jim Haynes, an American with so many connections to, and so much influence on Edinburgh, died in Paris this week.

Born in Louisiana in 1933, Haynes lived in Venezuela, and attended a boarding school in Atlanta before coming to study at the University of Edinburgh. Truly then a citizen of the world as he came to be known.

He started up The Paperback Bookshop and Gallery, The Howff which was a folk club and in 1963 The Traverse Theatre along with Ricky Demarco. He organised the Writers’ Conference in 1962 with John Calder and Sonia Orwell, and played an important part in the beginnings of the Fringe.

It was in the late fifties that artist Richard Demarco CBE, first met him. He told The Edinburgh Reporter: “The Traverse was born in 1957 when Jim and I attended a Fringe theatre production by Oxford University – Corruption in the Palace of Justice by Italian playwright, Ugo Betti. I was there with my wife Ann and her sister Elizabeth, and Jim was there sitting next to us. When we came out there was one car outside in the Royal Mile – no parking restrictions then and of course only a few cars anywhere. This was a black VW Beetle and the guy who had been sitting beside us started the engine as we came out. He opened the door and said: “Hi can I give you folks a lift?” Those were the first words he ever said to me.”

Demarco explained that Jim was in the US Air Force and had a shaven head at the time – but was in civvies that night as he had ‘escaped’ his duties at Kirknewton. Mr Demarco said: “We did not go straight home – we said we were going to have coffee in The Laigh on Hanover Street run by Moultrie R Kelsall, a well known actor. And Jim came with us. That was how our friendship began.

“It was the only place open around midnight. Candelight then – now forbidden. We are now living in a politically oversafe environment now. You would not be allowed to put 59 people in a space without fire safety, but that is what we did when we started up the Traverse.”

After such a long time of knowing someone, news of their death usually comes as sad news, and Mr Demarco agreed it is indeed very sad. He said: “The news of Jim’s death has hit me hard just after the passing of Sean Connery, who was also a great friend. These were two human beings who could not get their love of Edinburgh out of their souls. Although they did not live here for far too many years, they are what I regard as the true soul of Edinburgh.

“Jim Haynes in the end was an artist and an art patron, and so was Sean Connery. Both are personifications of the art and a kind of incomplete life, not able to live in the city that they loved.”

Mr Demarco explained how Jim Haynes became great friends with Tom Mitchell who bought the first Traverse building off the Lawnmarket for £300, (it was a former brothel at the time) and also John Calder the publisher, who found a home for his books at the bookshop which Haynes owned. He continued: “The Paperback was stuffed full of John Calder’s publications and it was very popular with the students as it was next to the Student Union at McEwan Hall.”

The McEwan Hall plays a central part in the Jim Haynes story as he ran the Writers’ Conference there in 1962 with John Calder before it moved to the Traverse in the following year as the Drama Conference.

Roddy Martine reminisces about his own memories of Haynes. He said: “I was a schoolboy when Jim Haynes opened his Paperback bookshop and started the Traverse Theatre with a group of friends (Nicky Fairbairn, Jim Morris, John Martin, Richard Demarco, Michael Shea) during the 1960s.

“I vaguely remember the fuss over a Morningside lady burning a copy of Lady Chatterley’s Lover on the bookshop doorstep in protest. I was taken to the Traverse, then off Lawnmarket in the Old Town, by the parents of a school friend to see Lotte Lenya sing the songs of Bertolt Brecht and Kurt Vile.

“I remember feeling very grown up as the Traverse was then such a controversial place where an actor had been stabbed on stage  shortly after it opened. I didn’t tell my parents I was going. They would not have approved.

“Aged 15, I  was in the audience for the Edinburgh Festival Writer’s Conference organised by Jim and John Calder and where a naked lady was wheeled across the balcony of the McEwan Hall in a wheelbarrow. On the day I don’t think the majority of us below were aware of what was taking place above us until the newspaper headlines of the following day. It is almost impossible to explain the fuss that this relatively innocent incident caused.

“In my first paid employment working for Merchant Printers in Moray Place, Jim turned up to ask us to quote for the underground magazine International Times (IT). Somewhat perplexed, my boss turned it down. Jim abandoned Edinburgh for London and Paris, where he became Professor of Sexual Politics but the liberating legacy he left in Edinburgh was powerful.

“Almost as a pilgrimage he would return annually for the Edinburgh Festival. I much regret that I did not find the time to attend any of the parties he held in his Paris atelier – legendary social events leading to an After Eight television commercial.

“However, friends from all over the world reported back to me about them always commenting on the welcoming genius of Jim. A kind, friendly bear of a man, it was always a joy to run into him in Charlotte Square or George Street during the Book Festival.

“Jim once announced that his ambition was to make friends with everybody in the world, and judging from the boxes containing his address books, he made a pretty good effort to achieve this. Non-judgemental yet challenging, with a naughty twinkle in his eye, it is for his astonishing generosity of spirit that I will remember him.”

Nick Barley the Director of Edinburgh international Book Festival remembers Jim who visited Edinburgh only a couple of years ago. He said: “Jim was a true trailblazer of the literary, Festival and arts worlds – on arriving in Edinburgh he wasted no time in shaking-up the city’s arts scene. From opening The Paperback Bookshop & Gallery and co-organizing the first – and gloriously notorious – International Writers’ Conference in 1962, (the precursor of our own Book Festival); to establishing the Traverse Theatre and participating in the creation of the Edinburgh Festival Fringe – he was in so many ways a pioneer of the Festival city we know and love today.

“What we will miss most about Jim is his warm and endearing nature, and his enthusiasm and love for people, conversation and creativity in all its forms. Always a friend before he even knew your name.   His was truly a life well lived.”

The Fringe with which he was connected remembered him on Twitter:

In truth, Haynes lived several lives, working in a variety of arts media. As a producer of over 250 theatre shows when he moved to London he was awarded the Whitbread Prize in 1966. He set up the Drury Lane Arts Lab where the work of notables such as David Bowie, John Lennon and Yoko Ono all featured. Magazines and newspapers were set up and he organised the Wet Dream Festival in 1971. When he reached Paris he taught media studies and sexual politics at The University of Paris for 30 years.

But latterly it was his famous dinner parties for which he became known. On a Sunday evening once a month there could be as many as 70 people in his Paris home, leading to Jim being described as the original social networker.

As Roddy Martine said, Jim felt that he had a duty to introduce everyone around him to each other. You will get a flavour of Jim and the way he lived in this trailer from the EIFF:

Meeting Jim the documentary film was shown at the Edinburgh International Film Festival in 2018 to huge acclaim, and the film features Edinburgh folk such as Ricky Demarco, Roddy Martine and many others who have had such an influence on the arts landscape in the capital.

Haynes was awarded an honorary doctorate by Edinburgh Napier University in 2018 at a special ceremony. He said at the time: “I am deeply honoured to be recognised by Edinburgh Napier, and hope to make a positive contribution to students’ experience, the life of the university and my beloved city of Edinburgh in the years to come.”

The university has since been working on cataloguing and preserving the records of Scottish and international artistic cultural history.

Haynes wrote his own memoir Thanks for Coming in 1984 and that is indeed what many in Edinburgh have said this week – that it was a pleasure to know him.

Writer, theatre director and dinner party host, Jim Haynes, born on 10 November 1933, died in Paris on 6 January 2021. He is survived by his son Jesper who is an artist.