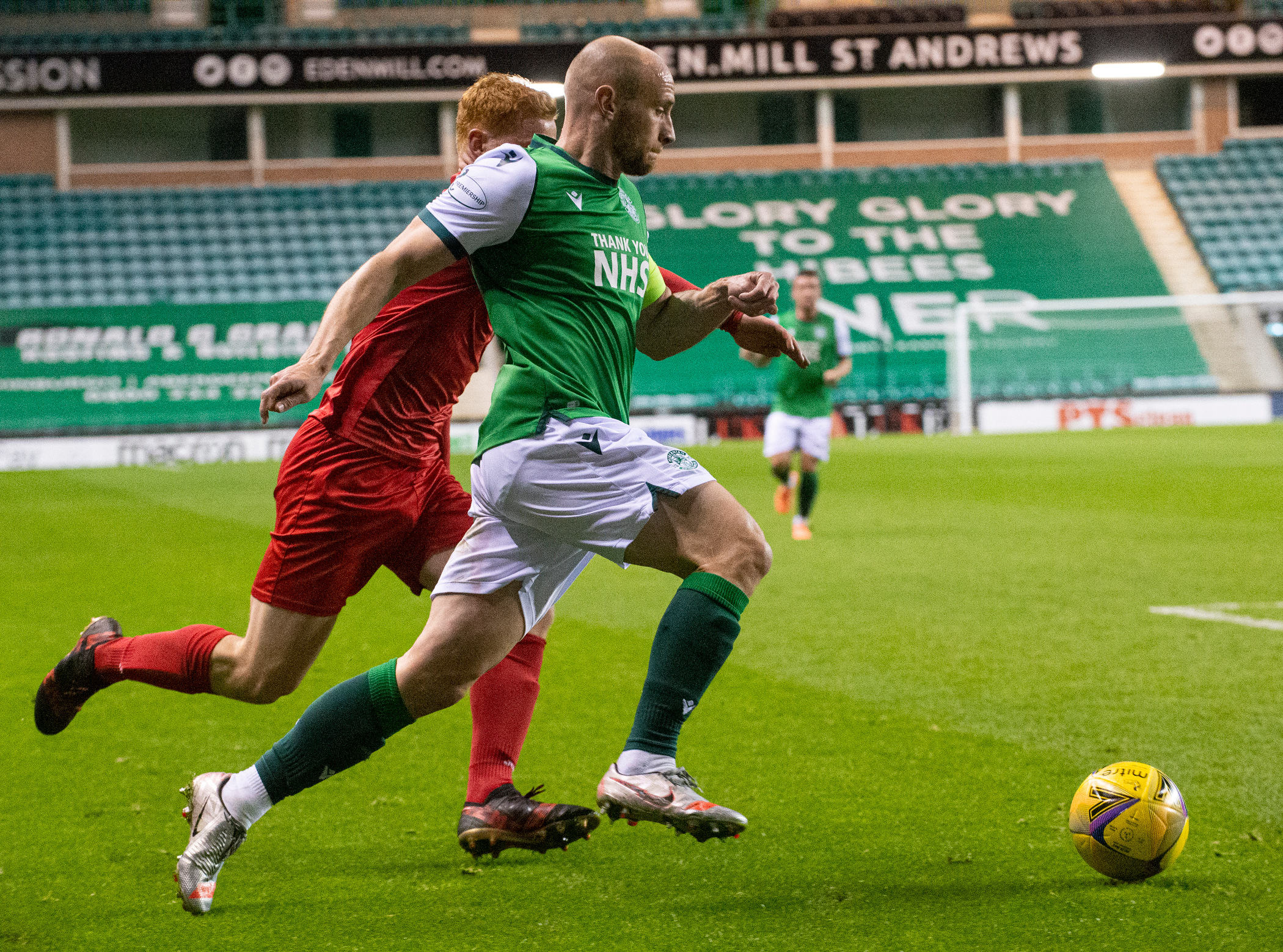 Hibs face St Johnstone in the semi-final of the Betfred Cup at the National Stadium this Saturday in a repeat of the 2016 fixture in the same competition.

On that occasion the match took place in front of a packed Tynecastle with three quarters of the ground bedecked in green and white.

The Saints were favourites to progress against Alan Stubbs’ men who were in the Championship for the second year.

The game was played out in biting cold, rain and occasional snow and Hibs  were without the injured Anthony Stokes but they went in front on the half-hour mark when Liam Henderson cut across Chris Millar and was brought down inside the area. The referee had no hesitation in pointing to the spot, much to the fury of the Saints’ players and Jason Cummings calmly stotted the resultant penalty into the net.

Today we look back at that Hibs team and ask where they are now.

Mark Oxley was the first choice keeper until his dismissal against Inverness Caledonian Thistle in a Scottish Cup final replay and his replacement Conrad Logan took over and retained his place for the rest of the season. Oxley was an unused substitute in the Scottish Cup victory but was releasedthat summer and signed a two-year contract with Southend United.

‘Sir’ David Gray gained iconic status amongst all Hibs’ fans by scoring a last minute winner against Rangers to win the Scottish Cup but injuries have seen his first team chances limited and with the form of current right-back Paul McGinn is a regular on the bench.

Liam Fontaine moved to Ross County where he was a mainstay in the Staggies’ defence before he moved to Dundee in the summer, teaming up with former Hibs’ defender Jordon Forster.

Paul Hanlon has been in excellent form this season and caught the eye of Scotland manager Steve Clarke. He made his international debut against the Czech Republic in October last year and could be in line for a place in the Euro 2021 squad.

Lewis Stevenson also won international recognition after this game and made his debut against Peru in 2018. He recently played his 500th game for the club but is no longer an automatic first choice and has to fight for his place in the team with teenager Josh Doig.

Fraser Fyvie helped Hibs to gain promotion by winning the 2016–17 Scottish Championship and was offered a new contract at the end of the season, but the offer was withdrawn after he took too long to respond.

He signed a one-year contract with Dundee United but suffered a cruciate ligament injury in December 2017. He was released by United in the summer of 2019 and joined Cove Rangers.

He scored Villa’s first Premiership goal and despite picking up an injury, he was instrumental in keeping them in the top division. Last month he signed an improved 5-year deal at Villa Park

He was played a major part in Scotland’s qualification for this year’s European Championship, the country’s first major tournament for 23-years.

Dylan McGeouch helped Hibs to promotion then his form in the top-flight helped him secure international recognition. He made his international debut alongside Lewis Stevenson against Peru. In the summer he signed for Sunderland who were managed by Jack Ross but injuries hampered his progress. In the January transfer window 2020 he signed for Aberdeen and in August 2020 he was one of eight Aberdeen players who received a suspended three-match ban from the Scottish FA after they breached coronavirus-related restrictions by visiting a bar earlier in the month.

Liam Henderson’s last game for Hibs was the Scottish Cup final victory over Rangers where he provided ‘assists’ for two of the goals.

He returned to Celtic, his parent club but under manager, Brendan Rodgers he made sporadic appearances although his 10 games in the league were enough  to secure a league championship medal.[

In the January 2018 window, he completed a move to Serie B outfit Bari in January 2018 for an undisclosed fee, but the club were declared bankrupt at the end of the season. He then signed a four-year contract with Serie B side Hellas Verona and helped then to achieve promotion to Serie A which made him the first Scot to play in a Serie A match since Graeme Souness with Sampdoria in 1986.

On 17 January 2020, he joined Serie B club Empoli on loan then in September 2020, he signed a four-year contract with Lecce.

Chris Dagnall was another unused substitute in the Scottish Cup final and left that summer to join League Two club Crewe Alexandra scoring 17 goals across all competitions. He then spent a season with 6-months with Bury before joining Tranmere Rovers in the January transfer window.

In October 2019 he signed for National League side Yeovil Town.

Jason Cummings helped Hibs to promotion during season 2016/17 and was nominated by PFA Scotland in their Young Player of the Year and Championship Player of the Year awards. That season he became the fist Hibs’ player since Joe Baker to score 20-goals in three successive seasons.

In June 2017 he joined Nottingham Forest on a 3-year-deal for an undisclosed fee then enjoyed a loan-spell at Rangers where he scored a hat trick in a Scottish Cup quarter-final victory over Falkirk.

He was subsequently loaned out to Peterborough and Luton Town before signing a permanent deal with Shrewsbury Town.

He made his international debut against the Netherlands in November 2017.

Substitutes that day were Marvin Bartley who is currently captain of Livingston, Martin Boyle and Darren McGregor who are both still at Hibs, James Keatings who plays for Inverness Caledonian Thistle in the Scottish Championship, Niklas Gunnarsson who currently plays for Strømsgodset in Norway, Kevin Thomson who has retired and runs his own football academy and Otso Virtanen who is a goalkeeper with KuPS in the Finnish Premier League.