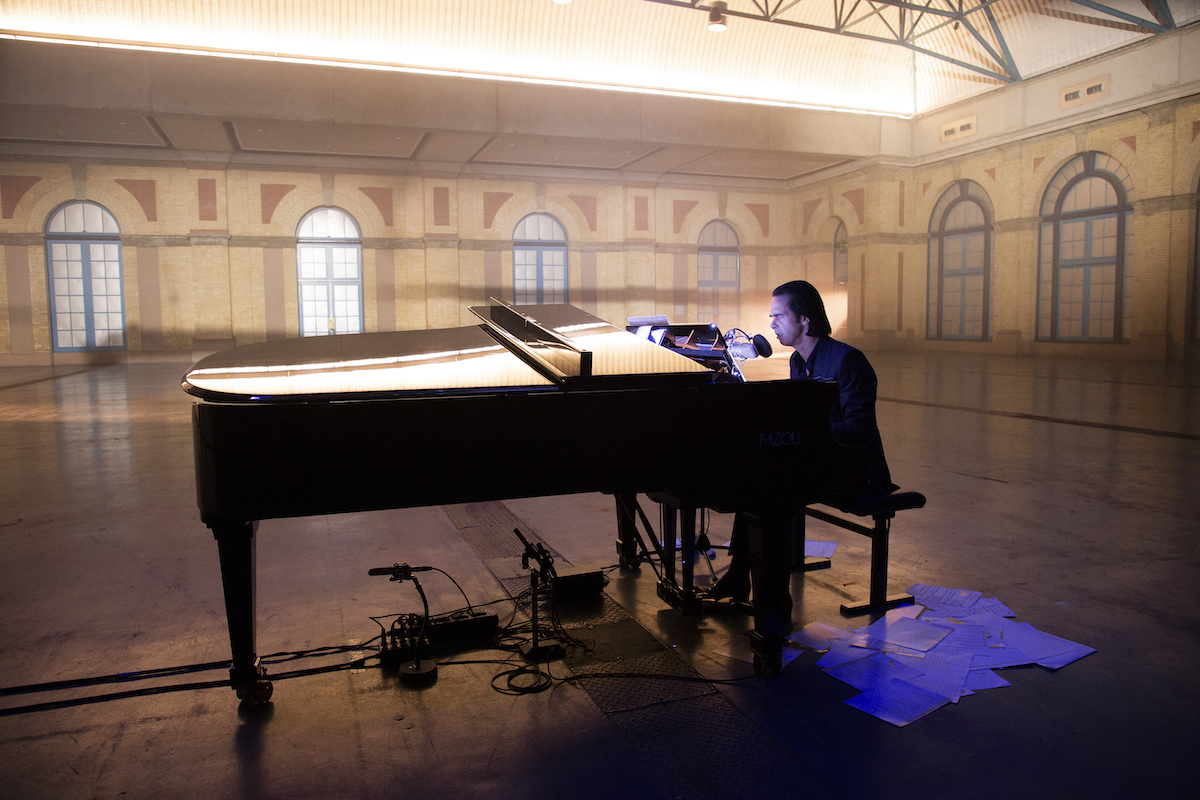 This double album pressing will delight fans of the Australian born singer-songwriter who has spent many years living on the south coast of England.

The setting of Cave hammering and caressing a grand piano in the empty Alexandra Palace began as a project for him to rediscover his back catalogue. A haunting live performance from June last year was broadcast as an online steam during the first lockdown.

The vinyl release towards the end of the year proved to be one of the most memorable long-players of 2020. On the back of the album’s notes, Cave writes of the event that he was “surrounded by Covid officers with tape measures and thermometers, masked-up gaffers and camera operators, nervous looking technicians and buckets of hand gel”.

One of the ‘masked-up’ workers appears on the album’s inner sleeve in front of Cave at the piano with his wife’s hand gently resting upon his shoulder.

It looks almost like a modern religious painting, capturing something sacred and other-worldly.

Spoken word album opener ‘Spinning Song’ carries that idea forward: “Well, this prayer is for you my love. Sent on the wings of a dove upward and upward.”

Among the tracks is Shane MacGowan’s favourite Cave song ‘Nobody’s Baby Now’ where the protagonist turns to among many things “Holy books…to unravel the mystery of Jesus Christ, the Saviour.” At the end of ‘(Are You) The One That I’ve Been Waiting For?’ we hear some laughter from Cave. For a moment it breaks the spell of being fully absorbed in the experience aside from lifting the needle and flipping the dark slabs over.

Cave calls upon some of his Grinderman cuts that fit well into the set-list, among them ‘Man In The Moon’ where the seemingly ageless 63-year-old old sings: “Hang on to me people, we’re going down”.

It feels more like a significant instruction to those of us who have clung to song-writers such as this over the last year and into this new one. There are moments which summon personal loss as well as the collective sorrow and despair every one of us has felt during this pandemic.

Even without the sonic power of the Bad Seeds ‘Jubilee Street’ still manages to create a transformative moment and the sound of an artist lost in the sheer power of what he has created. You are left to wonder how songs such as this will sound when we can once again attend a live performance.

REVIEW – Nick Cave at the Playhouse