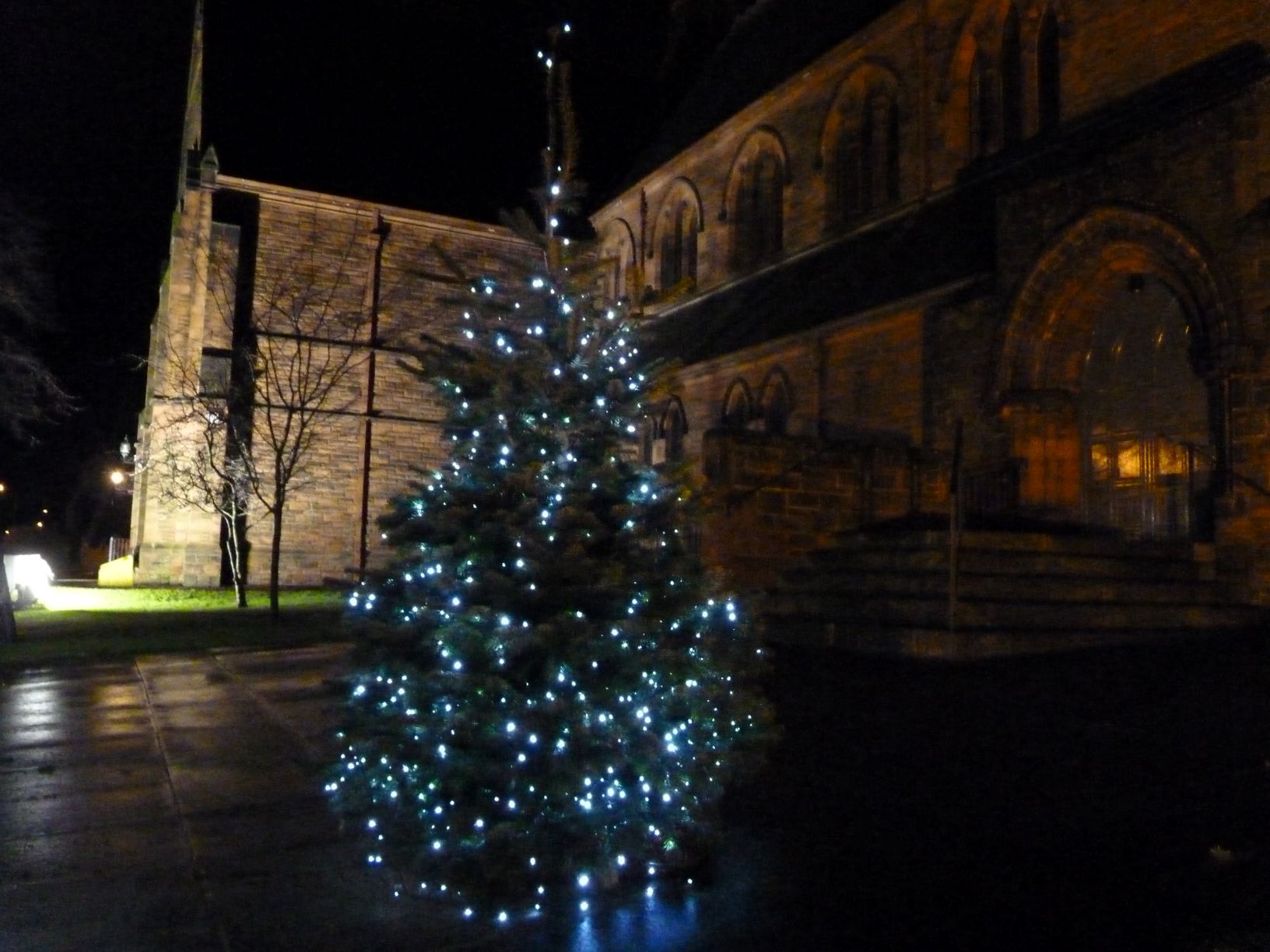 The Prime Minister in London tells us we should have a “Merry little Christmas” and his Christmas present to us is a ticking parcel labelled “Brexit”.

Meanwhile, the First Minister in Edinburgh tells us to have an even smaller Christmas and there should be no jollity at all over leaving the European Union.

The “four nations” plan for Covid over the festive season comes with variations. In Scotland, the law may allow us to travel and visit our families  during  the five days of Christmas but Nicola Sturgeon is urging us not to. (Read more about what you can and cannot do below.)

If we must, she says, the usual Covid rules still apply.  Eat outside, each family bringing their own plates, and stay two metres apart. “Aye right,” as they say at the more sceptical end of my street.  Whatever happens, it’s going to be a jolly strange Christmas.  And that’s because the Covid figures are still stubbornly high, just as they are across the UK and much of Europe.  We are still reporting 600-800 cases a day and 30-40 deaths. The latest total, up to last Sunday, was 6,092.

This week however, we have seen the first vaccinations being given in nursing homes and NHS staff are queueing up to receive their vaccine injections.  Over 18,000 people have so far been given their first injection. This week we also learned of a new vaccine being developed here in Scotland.  It’s coming from the French–owned Valneva laboratory in Livingston and, usefully, it’s a more traditional, deactivated vaccine which means it can be given to more vulnerable people.  But alas, it is only just beginning its trials and will not be widely available until late 2021.

Scotland may be doing relatively well on the Covid front but the figures published this week on “drug deaths “ put us to shame.   At 1,264 in the last year, it is the highest drug death rate per capita in Europe and three times the rate in England and Wales. It’s a trend which has been going on for several years, and both the Conservative and Labour leaders took Ms Sturgeon to task over it at First Minister’s Question time on Thursday.

Why had the SNP government cut funding to rehabilitation centres so severely that almost all (87%) of rehab beds were currently provided by private charities?  Ruth Davidson, for the Conservatives, revealed that out of the 365 places available, 100 of them were taken up by fee-paying addicts from other countries.  Ms Sturgeon said the level of drug deaths was unacceptable but offered no explanation or excuse. “We have much to do,“ she admitted, and apologised to the families who had lost loved ones.  She promised to attend the next meeting of the drugs working group in person and to report back to parliament by the end of January.

Despite such lapses in her government’s performance, the SNP continues to do well in the opinion polls. The latest survey, for The Scotsman newspaper, shows the party well on track for an overall majority in the Scottish parliamentary elections in May and support for independence at 58 per cent.  The online poll also found that 40 per cent of voters want to see an independence referendum in the next two years.

The reasons are not hard to guess. Brexit, and the chaotic way it’s been handled, is one reason. The lack of trust in Boris Johnson compared to Nicola Sturgeon is another.  The pandemic too has revealed that the four nations of the UK need not always be glued together. It’s difficult to know, though, how the issue of the economy will play out if unemployment rises steeply as the UK government’s job support scheme comes to an end in April.

Old memories and conspiracy theories have been re-awakened by the news from America that the man suspected of assembling the Lockerbie bomb may, after all, face criminal charges.  Mohammad Masud, thought to be currently in detention in Libya, was one of the original suspects in the bombing of Pan Am flight 103 as it flew to the USA over the town of Lockerbie just before Christmas in 1988. But Colonel Gaddafi refused to surrender him for trial and only one man Abdelbaset al-Megrahi was convicted.

By coincidence his family have just begun an appeal in the High Court in Edinburgh to have his conviction overturned, even though Megrahi himself died of cancer in 2012. I wonder where this tangled tale will end.

Finally, we have all been marvelling at the pictures of hundreds of starlings landing and taking off from electricity wires in the village of Airth near Falkirk.  Such murmurations demonstrate “chaos theory” in which the random flight of individual birds results in beautiful patterns of perfect order. I wonder if our individual human foibles could be made to work in the same way.  The birds were having such fun they managed to bounce the electricity wires together, causing power failures in 50 local homes.  Perhaps the starlings are trying to tell us something about our environmental policies.

Christmas bubbles can be formed between 23 and 27 December, to help reduce loneliness and isolation. You do not have to form a bubble if you do not want to – the safest way to spend Christmas is to stay in your own household, in your own home and your own local area

If you do decide to form a bubble this updated guidance asks you to:

minimise the number of people in a Christmas bubble. While 3 households is the legal maximum, our recommendation is that 2 would be better, and you should keep to a maximum of 8 people, age 12 and over – the smaller the bubble, the better and safer it will be
minimise the time spent with your bubble, especially indoors. The 5 day period is a window of opportunity, not a recommended time. We recommend you do not meet up with people in your bubble on any more than one day over the period and do not stay overnight unless it is unavoidable. And you should minimise the distance you intend to travel
avoid all travel between high prevalence and low prevalence areas – in particular, that means avoiding travel to or from Scotland and Tier 3 areas in England, and to or from any Level 4 areas in Scotland (of which there are currently none)
you should not go to a pub or restaurant or entertainment venue, for example a cinema or theatre, with your bubble
if you don’t form a bubble you must follow the rules in the local authority area you live in
Hogmanay and New Year: Christmas bubbles will not apply at Hogmanay and New Year. Instead, you should follow the rules on meeting up and travelling for your level.

Christmas bubbles
Between 23 and 27 December if you wish to you can:
form a Christmas bubble with two households, (1 can be an extended household), up to a maximum of 8 people – children under 12 do not count towards this number, if from the 2 households. While 3 households is the legal maximum, our recommendation is that 2 is better​​​​​
travel to meet people in your bubble. 1 of the bubble members must live in the local authority area you are gathering in and you should follow local travel rules once you arrive
meet people in your bubble in each other’s homes and gardens, in self-catering accommodation within a council area that a member of the bubble lives in, in outdoor public spaces and places of worship – you do not always have to meet as a group at the same time
You are recommended not to:

meet up with people in your bubble on any more than one day over the period and do not stay overnight, if possible
travel to or from a Tier 3 area in England or a level 4 area in Scotland
Households who have formed a Christmas bubble must not:

be in more than one bubble
change the members of the bubble once formed
Members of bubbles should:

try to limit contact with others before and after forming a bubble
stay 2 metres apart from people not in your own household – children under 12 do not need to do this (and can continue to meet other children under 12 outdoors who are not in their bubble)
try not to meet too often
not meet other people who are not in the bubble socially indoors or outside
follow the FACTS guidance, by regularly washing hands and keeping surfaces clean
not share crockery or cutlery