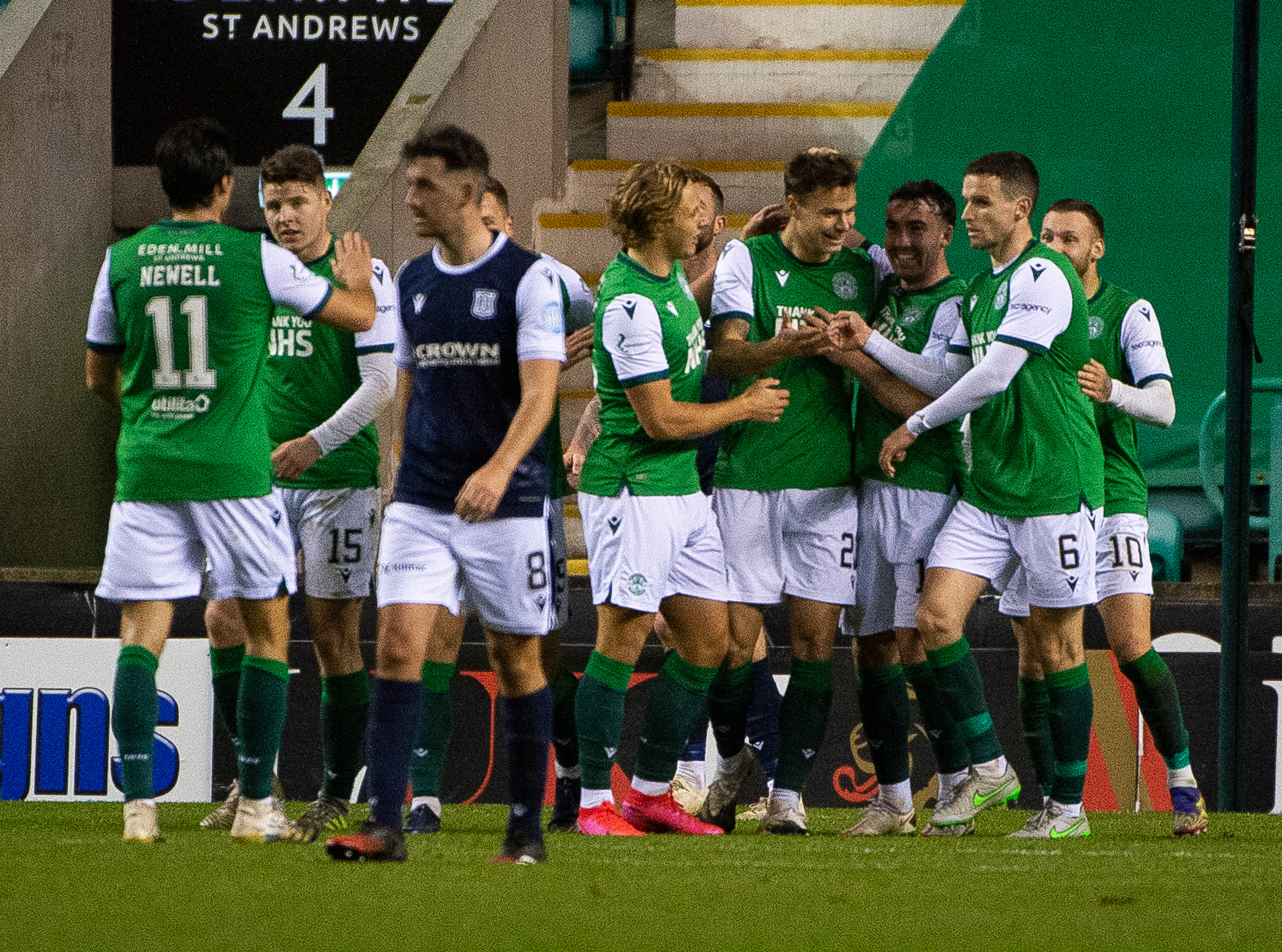 Hibs secured top spot and a seeded place in the last-16 of the Betfred League Cup thanks to a comfortable 4-1 victory over Dundee at Easter Road this afternoon.

Head Coach Jack Ross had to shuffle the pack and made four changes to the starting XI that lost to Aberdeen bringing in Dillon Barnes, Darren McGregor, Stevie Mallan and Drey Wright.

Kyle Magennis missed out, having been forced to withdraw from the Scotland Under-21 squad with a hamstring injury joining Lewis Stevenson and Scott Allan on the sidelines.

Alex Gogic, Ofir Marciano and Ryan Porteous missed out due to international call-ups whilst Christian Doidge was suspended.

Hibs went into the game knowing that only an outright victory in 90-minutes would secure a seeded place in the next round of the tournament whilst Dundee had the ‘luxury’ of knowing that a penalty shoot out win would be enough.

The hosts started brightly and opened the scoring in spectacular fashion in the 10th minute. Joe Newell spotted Mallan in space and the midfielder unleashed a tremendous 25-yard strike which flew into the Dundee net leaving Jack Hamilton helpless.

At the other end Barnes had to be lively to punch away a dangerous free-kick from Adam but from then on Hibs dominated the remainder of the first half.

Mallan found Boyle who turned his marker but his goal-bound shot was blocked then Dundee almost equalised against the run of play when Declan McDaid cut inside but his shot took a wicked deflection and flew inches wide of the post.

Hibs almost doubled their advantage in the 22nd minute when Kevin Nisbet cushioned Wright’s cross into the path of Newell. The midfielder calmly dinked the ball over Hamilton but it rebounded off the far post and the danger was cleared.

Just before the break Paul McGinn found Boyle on the right wing and he fired in a superb first-time cross which Nisbet met with a diving header but the ball flew agonisingly wide of the post.

Hibs almost doubled their advantage just after the restart when Jamie Murphy beat two played and sent in a low cross which evaded Boyle’s boot by inches.

Nisbet then intercepted a slack pass and played a one – two with Boyle but his long range effort flew just over the bar.

Dundee then enjoyed a sustained spell of pressure marshalled by Adam but the Hibs defence stood firm.

With 20-minutes remaining Dundee equalised when Christie Elliott chested down a Paul McGowan cross before firing an unstoppable shot past Barnes.

Mackie set up Murphy on the left and the on-loan winger beat two defenders before firing a low cross into the six-yard area which Nisbet dinked past Hamilton to regain the lead.

Moments later Nisbet picked up the ball in midfield, beat three players and fed Boyle who fired in a low cross which was knocked into the net by Gullan to all but secure the victory.

Murphy was then replaced by Melker Hallberg who scored within seconds of coming on thanks to another assist by Boyle.

Steven Bradley and Stephen McGinn replaced Boyle and Mallan with five minutes remaining and Hibs held on to secure the victory.