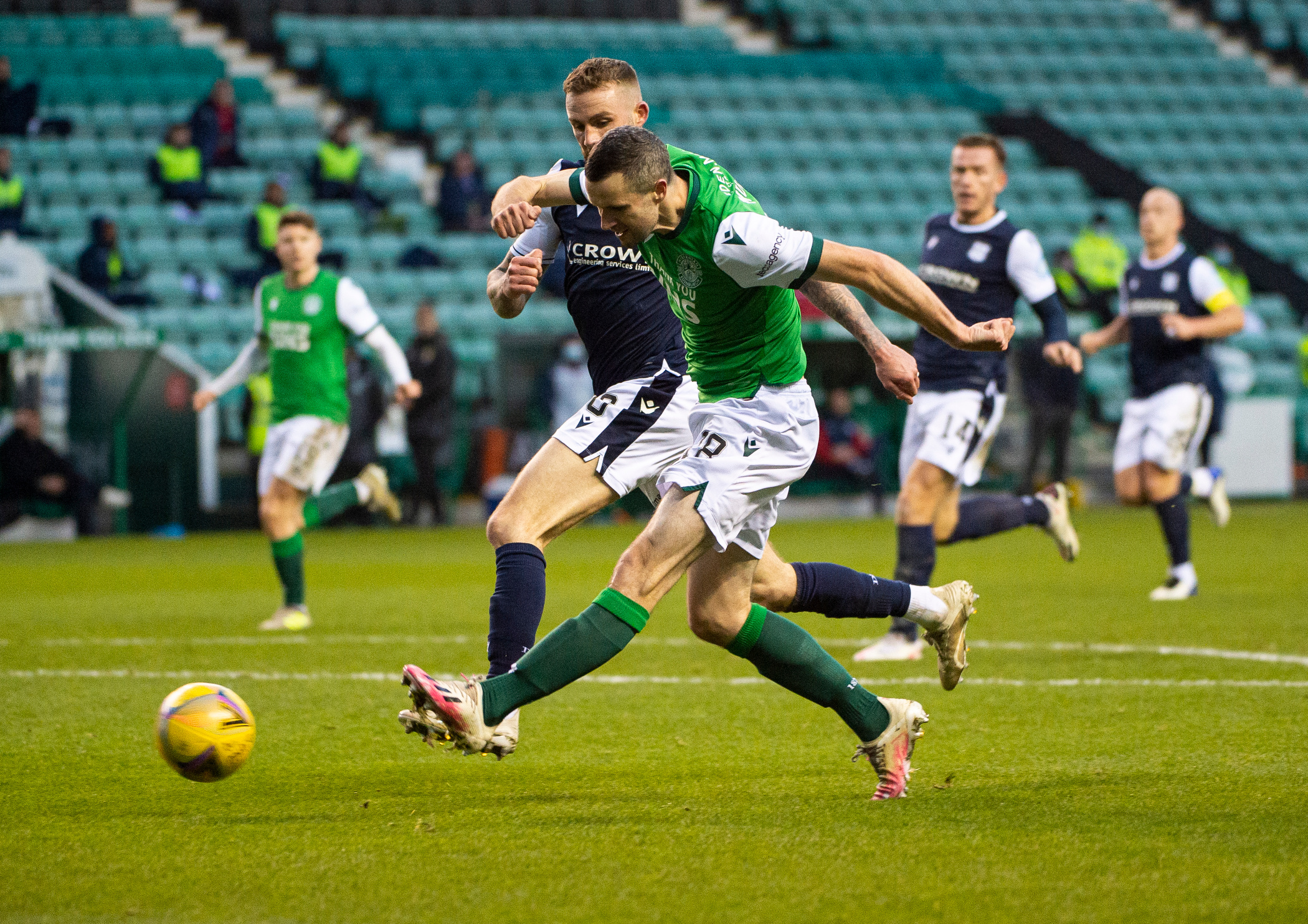 Hibs qualified for the last eight of the Betfred League Cup for the fourth successive year thanks to a superb goal from Jamie Murphy just before the break against Dundee at Easter Road this afternoon.

Head Coach Jack Ross made two changes to the starting XI that drew 2-2 with St Johnstone on Tuesday.

Influential defender Paul Hanlon who made his international debut for Scotland last month missed the game after suffering a ‘dead leg’ in the first-half against Saints and was replaced by experienced Darren McGregor who wore the captain’s armband whilst Christian Doidge returned in place of Alex Gogic.

In addition to Hanlon, Hibs were without Lewis Stevenson who only returned to training at the end of the week, Kyle Magennis and Scott Allan.

James McPake made five changes to the team that lost to Hibs in the group stages with former Hibs’ defender Liam Fontaine making his Dundee debut whilst ex-teammate Jordon Forster was listed amongst the substitutes.

Hibs started brightly and the first chance fell to McGregor who knocked a Stevie Mallan corner over the bar as his shirt was being pulled but referee Willie Collum didn’t see the infringement.

Moments later Jack Hamilton did well to save from Kevin Nisbet but could only parry the ball into the path oof Doidge was flagged offside.

Two Dundee players were booked for blatant fouls in the first 10-minutes, Shaun Byrne for chopping down Martin Boyle then Max Anderson for a late challenge on Ryan Porteous.

Sean Mackie twice sent in dangerous low crosses into the 6-yard-box but the Dundee defenders cleared the danger.

Mallan then did well to find Joe Newell with a disguised pass but the Englishman fired his shot well over from the edge of the area.

Charlie Adam was the next name in the book for a bad challenge on Mallan, his second in the space of two minutes then Hibs almost took the lead when a Boyle cross rebounded off the post into the path of Nisbet but the normally reliable striker fired well over the bat.

Just when it looked like the first half would end in stalemate Hibs took the lead when Nisbet fed Jamie Murphy on the left but was cynically fouled as he ran forward in support. Murphy however didn’t need him and strode forward before sliding the ball past Hamilton.

Shortly after the restart Dundee thought they had equalised when a long-throw by Fontaine was flicked onto the bar by Alex Jakubiak who then knocked the ball into the net but the linesman’s flag was raised and the ‘goal’ disallowed.

In the next passage of play Nisbet looked to have been tripped inside the box but the referee waved play on.

Melker Hallberg replaced Mallan who expressed his disappointment at the decision to Ross’s assistant John Porter.

Boyle then took off on a great run but his cross was cleared from just in font of the line by Lee Ashcroft as Hibs looked to get a second goal.

On the hour mark Doidge did well to hold the ball up before finding Newell inside the area but he hurried his shot and it went well over the bar.

Gullan was involved right away with a great pass to Boyle who cut inside and shot well over.

Whilst Hibs dominated possession the visitors looked dangerous on the break and Adam went close with a long range effort.

Moments later Hallberg found Boyle with a superb pass and the winger in turn fed Wright whose first time shot was well saved by Hamilton.

In time added on Doidge cut the ball back into the path of Wright who sliced his shot well wide of the target and the Hibs’ players managed to game out to secure a place in the Betfred Cup quarter finals.

After the final whistle Ross told BBC Sportsound: “I never thought we were in danger defensively. I thought we looked quite secure and maybe we could have made more of our opportunities, but in cup competitions its not easy to progress and for us to get through into the last eight I’m delighted with that.”

McPake said: “I’m gutted for my players. They put so much into that game and they didn’t get out it what they deserved. There certainly didn’t deserve to lose but we did and I’m proud of them. The way they battled and frustrated Hibs, who are a very good side.”

Hibs will find out their opponents following the Falkirk v Rangers game tomorrow.