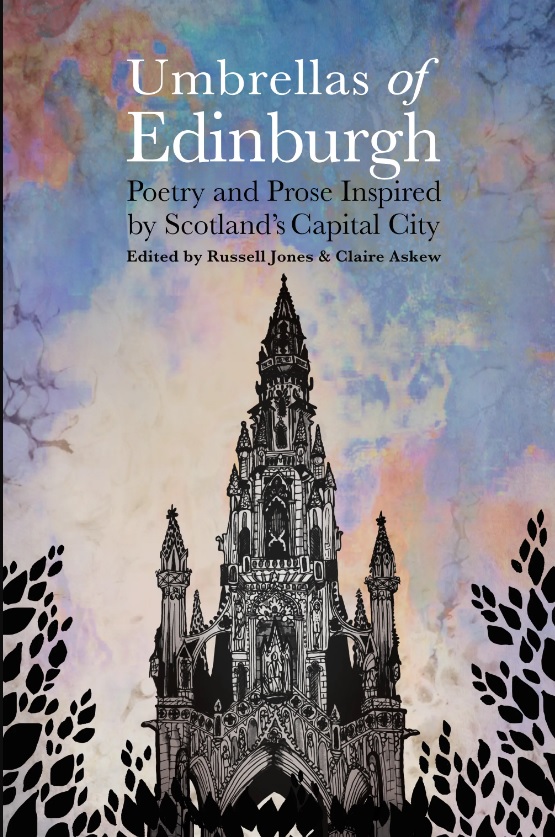 Patrick Geddes said: “A city is more than a place in space, it is a drama in time.”

In 2016, writers Russell Jones and Claire Askew explored that drama in their ground-breaking anthology ‘Umbrellas of Edinburgh.’ They asked 70 writers to choose a location in Edinburgh, and write about it. The city had, of course, already inspired numerous authors – but most of them were white (and now also dead) men.

Contributors might focus on memory, love, loss, architecture…what mattered was their connection to a place. Louise Peterkin wrote about the Cameo cinema, Colin McGuire looked ‘North Down Easter Road’. Helen Denerley’s giraffes at the top of Leith Walk were immortalised in Jane Yolen’s ‘Dreaming Spires.’ Tracey S Rosenberg’s ‘At The Fringe’ is an hilarious little ditty about the August invasion of what she terms ‘Edinburgh’s greatest trial.’ The Diggers pub is the subject of a wonderful poem by Nancy Somerville, one that aptly illustrates Alan Gillis’s prefacing words:

In 2017 the first publishers of ‘Umbrellas of Edinburgh’ went into liquidation, but now Edinburgh-based independent Shoreline of Infinity are republishing the anthology in time for the end of 2020. It will have new maps, cover art and poems – the perfect gift for anyone who knows Edinburgh, and indeed for anyone who’d like to know it better.