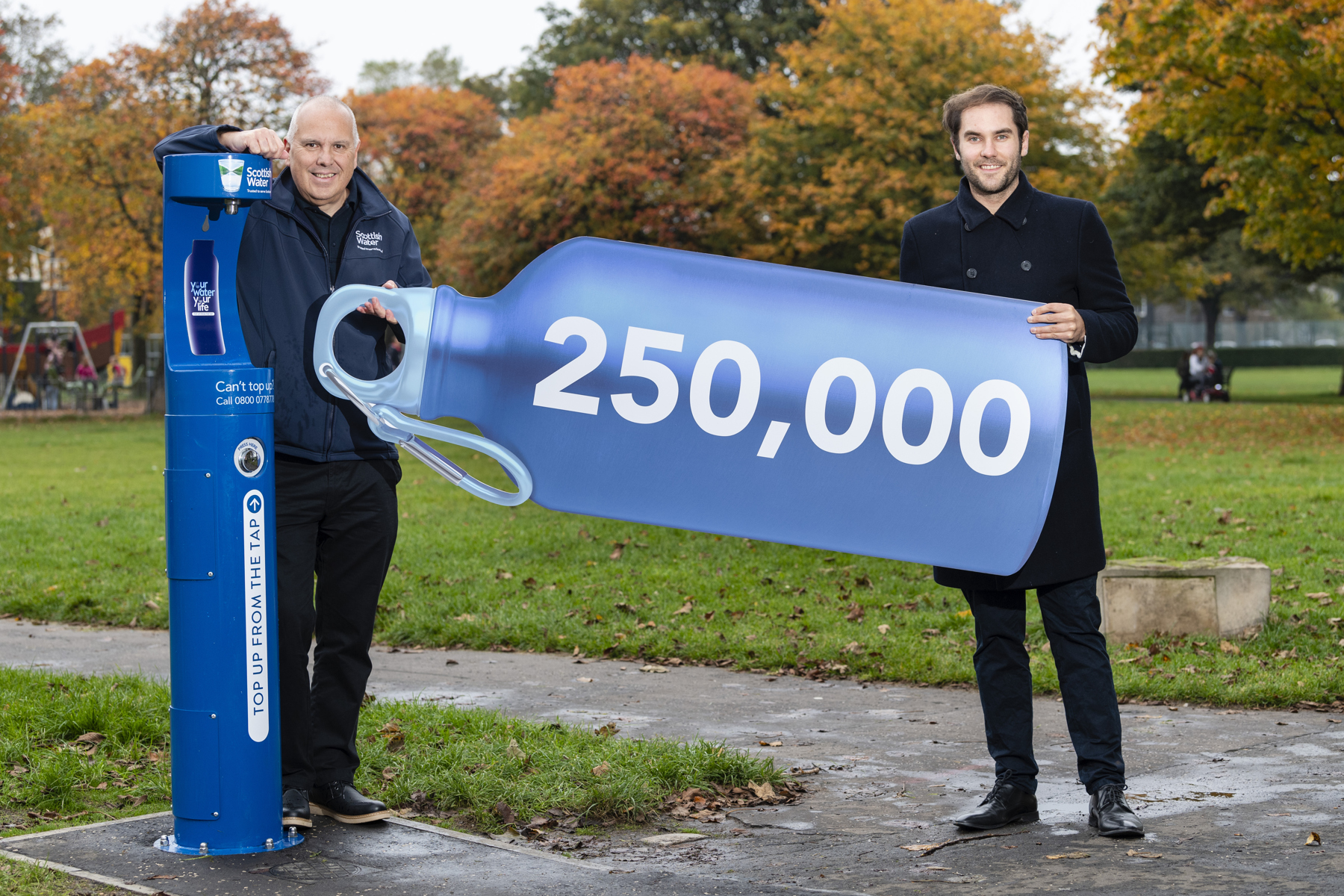 A Scotland-wide network of public water refill taps that allow people to top up their refillable bottles while on the move is being further expanded – with Edinburgh set to get five more.

Scottish Water is confirming it is to install 70 of its distinctive bright blue Top up Taps at locations across Scotland by March 2021 – including sites at Leith Links, Portobello, Royal Mile, West End and Grassmarket.

And with Edinburgh being home to the first tap – at the Scottish Parliament – it means the capital will be leading the way in Scotland as the first city to have six taps.

The news comes as Scottish Water revealed the equivalent of 250,000 plastic bottles have already been saved through people topping up from the current collection of Top up Taps located across Scotland.

And with the go-ahead being given for more taps to be installed, water drinkers are being thanked for their sustainability efforts.

The Top up Taps are part of Scottish Water’s Your Water Your Life campaign which means people keen to stay hydrated on the go can do so free of charge, saving money as well as being kinder to the environment by reducing litter and waste.

Brian Lironi, Director of Corporate Affairs at Scottish Water, said: “We know that people in Scotland share our passion for our country’s great-tasting tap water as well as doing our bit for protecting the environment and improving health. It’s fantastic that our Top up Taps programme remains on track to deliver a national network of 70 refill points by March 2021.

“It means people out and about can stay hydrated by filling up for free with high quality public tap water – this is ‘your’ water after all, so we want to make sure you can enjoy it as easy and often as possible.

“There’s a growing appetite from the public to fill up their reusable bottles, and in these changing times it is more important than ever to take a refillable bottle with you and have your own fresh, clear water while you’re on the go.

“We want to thank Scotland for supporting our Top up Taps and to help to achieve the amazing milestone of reaching the equivalent of 250,000 bottles saved.

“Hopefully it becomes the norm for people to seek out our Top Up Taps around Scotland and take their bottles with them whenever they go out.”

The latest Top up Tap to be added to the roll-out programme is in Leith Links in Edinburgh, where City Council leader, and Leith councillor, Adam McVey was on hand to be the first to sample the water.

Cllr McVey said: “These five new Top Up Taps across the city will help all of us cut down on single-use plastic and it’s encouraging to hear how well the existing taps have already been used.

“The Council has a strong commitment to reduce plastic in the Capital and expanding the number of points people can refill
their own bottles will help us eradicate the use of disposable plastic and ultimately tackle climate change in our city. These taps make it even easier for us to stay hydrated in a sustainable way when we’re out and about and I know Edinburgh residents will continue to make great use of the new taps once installed.

“Access to drinking water refilling points is an issue I’ve personally raised with Scottish Water and I’m delighted they’ve been
so engaged in helping people in Edinburgh do their bit to contribute to a green future for our city.”

Environment Secretary Roseanna Cunningham said: “Long-term initiatives such as Top up Taps are essential in helping to tackle our throwaway culture and in encouraging people to reduce and reuse.

“Single-use plastic products are not only wasteful but generate unnecessary litter that blights our beautiful beaches and green spaces while threatening our wildlife on land and at sea.

“I look forward to seeing the Top up Taps roll out further across Scotland, making them accessible to communities the length and breadth of the country and I would like to thank Scottish Water for taking action on this important issue. This drive to cut waste will be further complemented by the introduction of our Deposit Return Scheme – the first scheme of its kind in the UK – which will place a 20p deposit on drinks bottles and cans.”

Catherine Gee, Operations Director with Keep Scotland Beautiful said, “The unsustainable production, distribution, consumption and disposal of the thousands of single use items used every day in Scotland is inextricably linked to the most serious environmental challenges of our time  – climate change and biodiversity loss.

“And litter exemplifies the disregard we have for disposable items – with two out of five sites in Scotland recording drinks related litter.  We welcome the roll out of Scottish Water’s water refill stations which promote reuse and make it easy for people to make more sustainable choices and reduce plastic waste and litter.”

With 26 taps up and running, more than 82,000 litres of water have been dispensed into refillable bottles – it adds up to the same as 250,000 330ml-sized plastic bottles. If laid end-to-end they’d stretch from Edinburgh to Stirling Castle.

The first of the taps was installed in Edinburgh outside the Scottish Parliament exactly two years ago. Since then taps have been turned on from Shetland to the Scottish Borders. The most popular tap of those currently installed is on Glasgow’s Buchanan Street with taps serving the both ends of the West Highland Way, at Milngavie and Fort William, also proving to be highly popular.

Under the roll out, Glasgow is also to get five taps in various locations around the city. Locations elsewhere across Scotland are also being activity progressed.

Each of the distinctive, high-tech water stations is plumbed directly into the public water supply and each has digital tracking technology which logs how much water is being used and how much plastic potentially saved.

A full list of the current and planned Top up Taps is available on a dedicated website https://www.yourwateryourlife.co.uk/