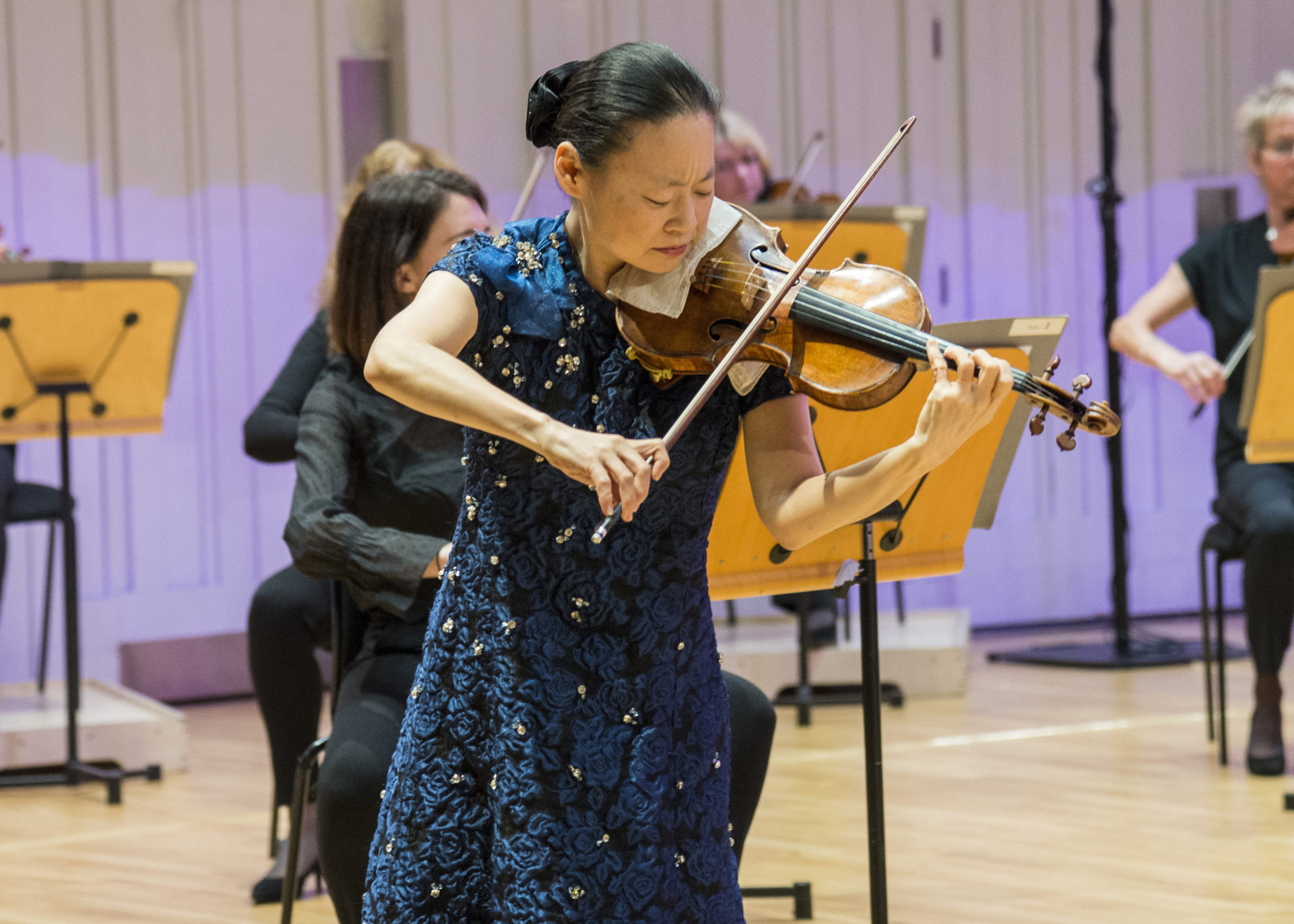 The performance was shown on Friday 23 October 2020 as part of their celebrations for the 250th anniversary of Beethoven’s birth.

Beethoven is beyond doubt one of the most important figures in music history, paving the way for the explorations and innovations of the nineteenth century and still inspiring composers in the twenty-first. But I have a slightly controversial admission to make: Beethoven isn’t so much a composer I like, as one I respectfully tolerate.  On occasion I have found certain pieces profoundly moving, such as hearing his Fifth Symphony, written amid the turmoil of the Napoleonic Wars and Vienna’s occupation, paired with Schoenberg’s haunting A Survivor from Warsaw, performed in a cathedral rebuilt from scratch after being destroyed in WW2. But all too often I find that Beethoven’s music simply sits uncomfortably between the clarity of the 18th century and the intensity of the 19th; without the poise and refinement of Mozart or the all-encompassing emotivity of Wagner. So when I tuned in to the RSNO’s broadcast of his First Symphony and Violin Concerto I was a touch sceptical, but hopeful that I might see a different side to Beethoven – and I wasn’t disappointed.

Within Beethoven’s output, the First Symphony represents probably the end of his truly ‘classical’ style (although I’m sure music historians could argue for hours over that claim!) and was a bold but still relatively conventional first foray into the genre that would define his career. The RSNO strings took up the initial allegro with tangible urgency, aided by Søndergård’s incredibly enthusiastic conducting. It was certainly a joy for once to be able to see Søndergård from the orchestra’s perspective, aided by intercuts between various camera angles, and it is obvious that his experience as a performer (an orchestral timpanist) has meant he very much engages with the music as something he is part of, rather than in control of. One could say that occasionally he does a bit too much, bordering on frenetic in faster sections, but this never seemed to get in the way of the orchestra and, if anything, added to the moto perpetuo feeling that Beethoven’s youthful works embody.

Although for the most part this first movement bears the hallmarks of the classical style, it still has plenty of Beethovenian quirks such as abrupt shifts of harmony and the characteristic, oft-parodied prolonged final chord. The andante is far more obviously bound to the classical heritage, with hints of later Mozart in its imitative if not entirely worked-out opening and coquettish chromatic passages. These first two movements were the only times in the entire performance that I felt there was a slight issue of balance, with both the strings and winds occasionally seeming a little overwhelming in quiet passages, but I suspect this could be attributed to the disorienting experience of playing with social distancing measures in place.

The third movement is a minuet, albeit with no vestige left of it being a dance form. It clearly points to Beethoven’s later adoption of the faster ‘scherzo’, yet could hardly be described as playful. The orchestra firmly engaged with its erratic character – sometimes menacing, sometimes joyful, but always entirely neurotic. The strings really shone in this movement, with truly foreboding moments from the double basses, cheeky interjections in the trio, and a hearty bite to the sound in the more aggressive passages.

Real care was taken with the Adagio opening of the finale, a passage that lesser ensembles might make into something matter-of-fact, but here becoming a sensitive, tentative quasi-cadenza. In this final movement Søndergård really came into his own, and it was obvious that he was enjoying every second.

The Violin Concerto, despite being first performed only six years after the First Symphony, shows a radically different Beethoven, who seems undoubtably far more in touch with his emotions and at ease with his own style. Its more consistent, natural moods somehow felt far more at home for the orchestra and while the symphony made me admire their playing, the concerto made me love it. Ironically the concerto somehow seems far more ‘symphonic’ than the symphony that preceded it, maybe because our perception of a symphony today as the ultimate method of expression for an orchestra is a direct consequence of Beethoven’s later development.

In the opening of the first movement – a vastly extended version of the traditional first movement form in which both soloist and orchestra have lengthy independent passages to explore the main themes – the wind choirs felt astonishingly fresh, again backed up by potent urgency in the strings. Soloist Midori played with incredible sensitivity and it was obvious, both from how involved she was in the music and from her words before the performance, that the piece is very close to her heart. In the faster sections her approach was intensely agile, virtuosic in the sense that even the most difficult passages fell effortlessly under the bow, rather than that insufferable kind of virtuosity that glories in its own struggle, often at the expense of the musical line.

The quirky rhythmic shifts and broken chords that could so easily seem obscure or haphazard in a more laboured performance simply felt like natural extensions of Beethoven’s musical thought. I suppose the flipside of this was that I did occasionally wish she could have lingered a touch more in some of the more expressive passages – but this is a relatively minor niggle given the consequence was a performance that flowed effortlessly. Moreover, this incredible momentum from Midori was always picked up by the ever-attentive ensemble, meaning orchestra and soloist could spring-board off one another in a true musical dialogue. In a manner every change of mood or affectation seemed to start with the soloist and then seamlessly be taken up by the orchestra – this was an ensemble that not only respected the soloist, but was clearly on board with her every artistic decision.

The highpoint in the programme for me had to be the Concerto’s second movement, the Larghetto. In its spacious, foreboding opening, perhaps for the first time in the programme, we truly see Beethoven the Romantic. It is essentially a set of musings, led by the solo violin, on a theme introduced by the orchestra. There is something of its pensive and curiously archaic structure that gives it far more affinity, at least in character, with Brahms than Mozart or Haydn. In this movement particularly the orchestra excelled in its ensemble. When playing without the soloist they were so tight they felt almost like a single instrument, and there was a true warmth of sound, noticeable even over the speakers on my TV – a testament to the audio production’s quality and sympathetic attention to detail.

Towards the end of the movement an almost religious atmosphere took over; calm yet somehow rejoicing, like the peaceful end to a well-spent life. Throughout the concerto there were moments of blissful self-reflection in Midori’s solo passages and her fascinating cadenzas for the outer movements betrayed a deep connection to the piece as a whole, with subtle call-backs to previous material, if occasionally seeming a touch anachronistic. In contrast at the conclusion of the Larghetto Midori displayed profound musical sensitivity, clearly engaging with its reverent tone by opting for practically no cadenza at all.

The third and probably best-known movement is by contrast a jovial, earthly rondo that becomes a tour-de-force for both soloist and ensemble. Again the orchestra showed a youthful energy and Midori made light work of the double-stops and broken chords that litter the movement. However I couldn’t help but feel that there was a tiny loss of momentum towards the end, which was a shame given the defining characteristic of the performance so far had been that sense of forward motion.

As an aside, I did wonder if Søndergård’s assertion that the performance used ‘period instruments’ was a touch misleading. While he only mentioned the use of natural trumpets and softer, historic timpani the strong implication was that this was a ‘period’ performance, yet seemingly the rest of the orchestra were using modern instruments – most conspicuously metal flutes and valved horns. Although not too much of an issue in its own right (you’d struggle to find a historically-informed performance where every single instrument is period-appropriate) the clear dominance of modern instruments here raises an interesting question of what exactly qualifies as a ‘period’ performance, and what is to be gained by facing off period trumpets and timpani against stabler, stronger modern counterparts.

I suppose the elephant in the room here is the fact this was a streamed, online performance amidst a global pandemic. With current restrictions to meetings in public spaces there is no way this performance could have gone ahead in any other medium, but I am heartened that the RSNO has taken it up in such a compelling and professional way. Although streamed performances will never quite have the quality of acoustic sound or the electric hubbub of a live audience, the RSNO has clearly leaned into the format and taken advantage of the ways in which a recording can actually offer a more comprehensive concert experience. The pre-concert interviews with performers were particularly compelling, including the lead cellist speaking powerfully about how not being able to meet to rehearse and perform could and has sapped many musicians’ motivation. Knowing first-hand just how disastrous the pandemic has been for professional musicians I was seriously impressed that RSNO is clearly doing the right thing by the musicians here; focusing on allowing them to continue to express themselves musically and perfect their art, while yet bringing joy to their listeners.

Inevitably there was something of the polish of a pre-recorded performance that lacked the spontaneity of a live one, but the choice to record movements in one take was wise and possibly contributed to the overall energy of the performance. Especially heart-warming, too, was seeing the performers applaud their colleagues at the end – a sober but heartfelt display that seemed just right for the occasion.

I have no doubt that the RSNO’s performance of the First Symphony was flawles, but sadly I remain unconvinced the piece has any great merit beyond being the ‘first’ of a renowned symphonist, a precursor to the unquestionably pivotal symphonies to come. If it weren’t for this being a major Beethoven anniversary I would be quite tempted to question why orchestras continue to regularly perform such a conspicuously juvenile piece when far superior compositions by marginalised composers remain relatively untouched.

By total contrast, however, Midori and the RSNO’s sensitive and bold performance of the Violin Concerto has unquestionably opened my eyes to the piece. The RSNO will perform three other Beethoven symphonies this season (the ‘Pastoral’, the fifth and the seventh) and given how much I enjoyed the concerto I am intrigued to see what Søndergård will make of these later, more introspective pieces. Ironically, Friday’s performance allowed me to see beyond Beethoven the ‘symphonist’ and instead to see Beethoven the person.