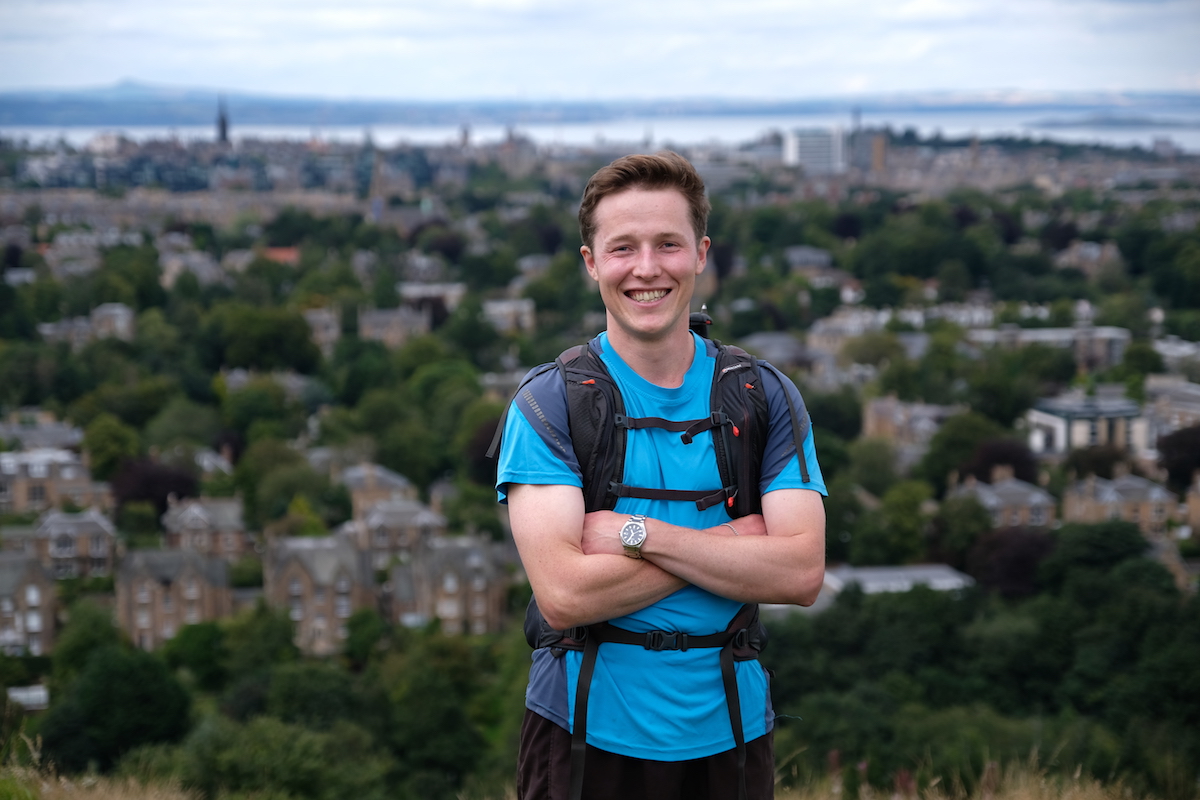 Matt Girvan will start the biggest challenge of his life – walking 864 km in just 15 days in just a few days’ time.

He is trying to set a new solo speed record for the Scottish National Trail while raising funds for the charity WaterAid. The trail runs along the length of Scotland and is regarded as one of the UK’s toughest hikes. Matt will be alone without any support.

He will set off from Kirk Yetholm in the Borders on 11 September 2020, and make his way up to Cape Wrath in the far northwest. If he completes the hike in his target of 15 days he will break the current solo record for the trail, which he believes stands at 18 days.

The 28-year-old from Bruntsfield said: “I’m hoping to squeeze this out in 15 days which will mean averaging about 57 km of walking and, at times, running every day.

He said: “The first half of the trail is generally regarded as easier and it takes me through lots of towns where I can top up on supplies like water from rivers and get food from shops. The second half is far more rugged and remote so I will have to be extra careful not to run out of essentials. But one of the reasons I am doing this is to see more of Scotland and some of the places I plan to be are pretty remote and I will probably be the only person around.

“I had plans to do some overseas travel this year but Covid stopped that, so at the start of lockdown I started thinking about where I could go and to set myself a new challenge. I love running and endurance sports and liked the sound of this trail so thought this would be the perfect time to go for it!

Matt will carry around 10-12 kg of kit including food and water and plans to wild camp most nights with an occasional stay at a hostel to charge his phone, have a shower and a proper bed for the night.

The vegetarian, originally from New Zealand, has been training by regularly running in Blackwood and Braid Hills in the Capital several times a week with a weighted backpack to improve his strength and resilience.

He said: “It really hasn’t felt like training but rather just doing what I love and I am lucky enough to have great, gorgeous places to run on my doorstep. I love being out in the open air and like the ‘me time’ it gives me. It’s just as well really as for almost all of this challenge I will be alone except for my mobile phone and a GPS tracker so my friends and family can see my progress.”

Matt hopes to raise a minimum of £1 for every km he completes and to donate this to WaterAid, the official charity of Scottish Water where he works as a Mechanical Engineer in the Technical Support and Assurance team.

He said: “I wanted to do this as a fundraiser for WaterAid, as I know how much charities are struggling to get funds right now. Access to clean water is critical and even more so during Covid to ensure people have hand washing facilities. Most people take clean water for granted but so many people do not have any and WaterAid works tirelessly to get water and sanitation supplies to people who desperately need them.

“Water is a big theme for this challenge – not only do I work for Scottish Water but I know water will constantly be on my mind as I hike. I need to work out how much to carry at a time, where I will be able to top up my bottles safely and where I can answer nature’s call responsibly.

“I know it is a big challenge I have set and I genuinely have no idea if I can do this, but I’m really up for it and just hope the weather stays on my side and I stay injury-free.”

The challenge comes just weeks after Matt completed a prestigious running achievement when he joined the sub-24 hour club for the Bob Graham Round in the Lake District. It involved climbing 42 peaks over a 106 km route with 8200 m of ascent, and is seen as the UK’s ultimate challenge for fell runners. He and a fellow New Zealander completed it in 23 hours and 36 minutes.

To sponsor Matt on his challenge go to: https://www.justgiving.com/fundraising/matt-walks