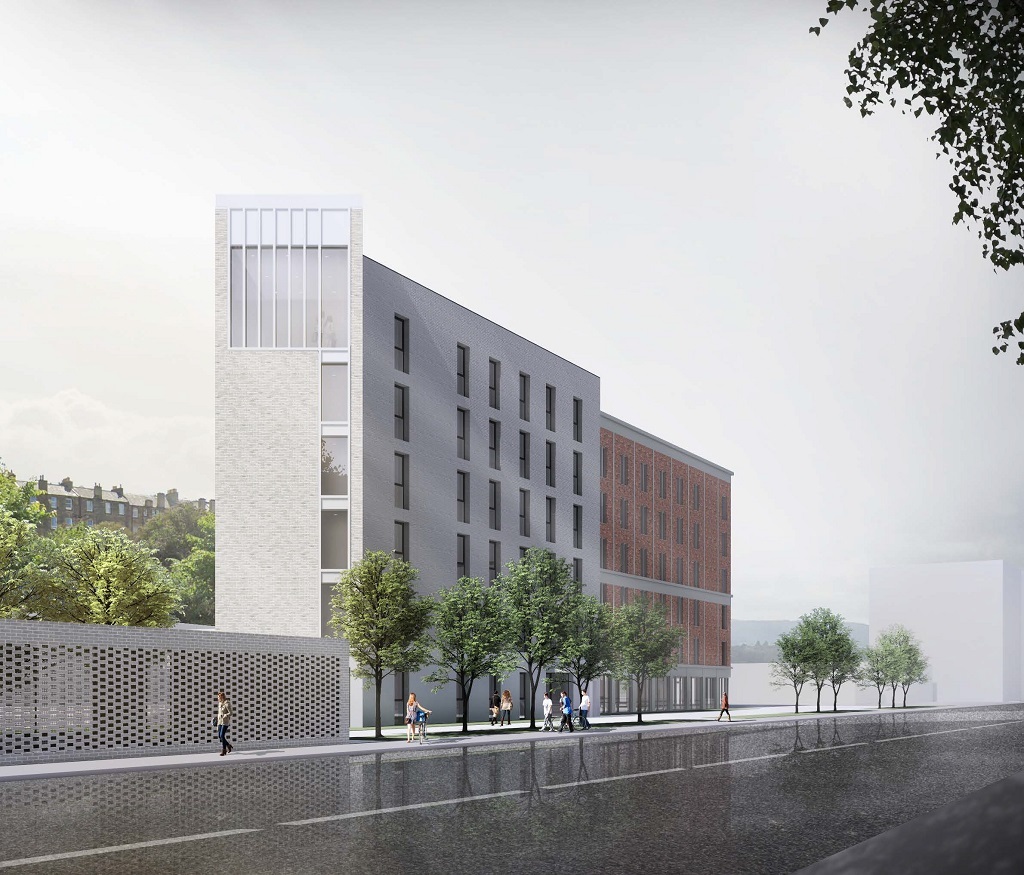 Proposals have been submitted for another new student accommodation block in Abbeyhill.

Developers HG London Road 2 Ltd are hoping to construct a six-story building that will accommodate up to 76 students on the site of a non-operational car wash at 65 London Road.
To make way for the development, existing buildings will have to be demolished.
The block will comprise 72 studio bedrooms and four accessible studio bedrooms, and will also contain a reception and student amenity space, including communal rooms, for residents’ use.
The developers say the proposed palette of materials for the building have been informed by surrounding architecture. Facade materials include a light speckled brick and a pre-cast concrete plinth around the base of the building.
The proposals are lodged by the developers of a student building being constructed on the same road, and the intention is to connect the two developments by way of a corridor.
At 65 London Road there will be cycle parking spaces for 76 bikes.
No motorcycle or car parking spaces will be available to residents, but if appropriate students will be able to use accessible and City Car Club parking spaces at the adjacent housing block.
Plans are in place for trees to be planted as part of the development along London Road to enhance the frontage and quality of the streetscape. Existing trees to the rear of the site will be retained.
There has been some negative reaction from local residents on social media to the news. It appears they are primarily concerned by the growing number of student housing blocks in the area.
One resident posted on Facebook: “Development is okay as long as it suits the area and proper infrastructure is in place to accommodate it, such as roads, schools, parking, medical, social activities, greenspace, etc.
“These student flats are merely small pods which are no good to young families requiring affordable housing.”
Another local resident commented: “And what benefit does this bring to locals like me living round the corner? Build more flats, provide more local business units on the ground floor, more green spaces. No more student flats.”
One resident is now considering forming a local group to “fight back” against student housing developers.
The resident said: “Complaining on Facebook won’t do much. It was time long ago to create an Abbeyhill Residents’ Association and start fighting back, otherwise they’ll never stop and they’ll take whatever they can from us.”

A spokesperson for HG London Road 2 Ltd commented: “The provision of new purpose-built student accommodation on this site will support the growth and development of the higher education sector in Edinburgh, and in doing so increase the range and choice of accommodation offered to students. It will also serve to free up general housing stock which would normally be occupied by an increasing student population.

“Students also contribute significantly to the local economy on items such as food, clothes and eating out.

“The site is in a central location on London Road with good connections to public transport, offering high frequency bus services to all parts of the city. Higher education campuses can also be accessed by bicycle and in some cases by walking.

“Our submission marks an important moment for the future redevelopment of a constrained site and represents a further contribution to the ongoing regeneration of the wider area.

“The proposed development is linked to and complements the neighbouring student accommodation development at 61-63 London Road, which is currently under construction.

“It was acquired after being re-marketed as a result of an existing undeliverable residential consent.

“The residential development consent entailed building over a sewer that runs along the site’s frontage with London Road, however discussions with Scottish Water have established that this sewer cannot be built over, thereby rendering the residential scheme undeliverable.

“Development also has benefits in that it allows the rationalisation of the site frontage, including the removal of an existing access onto London Road. The coordination of the proposed development with the consented scheme enables a shared site access and shared car club parking.”