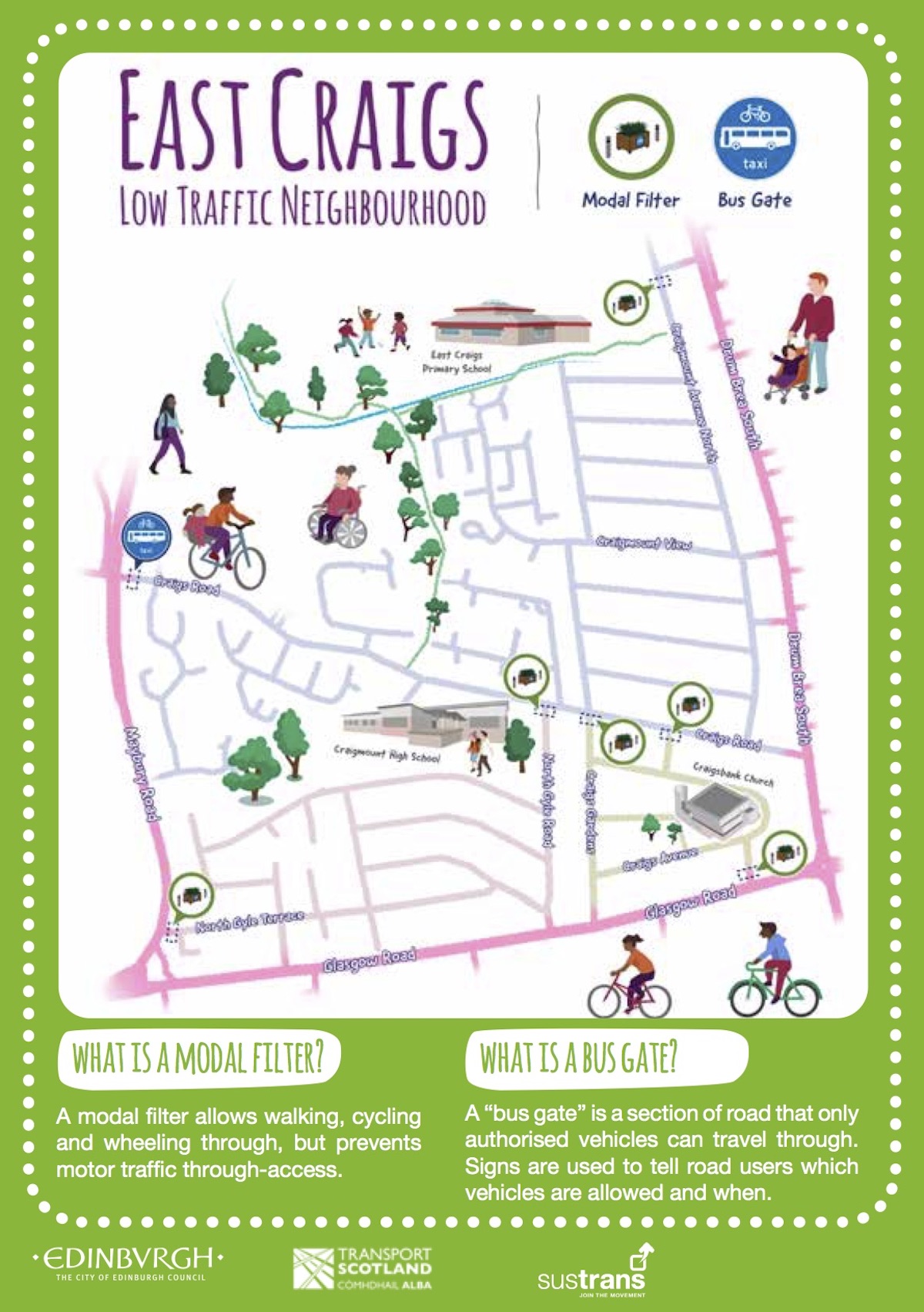 The first Low Traffic Neighbourhood (LTN) will be introduced as part of the Scottish Government funded Spaces for People measures in East Craigs. These temporary measures will make the area safe for people walking, wheeling and cycling with roads closed to through traffic and segregated cycle lanes.

A bus gate is part of the plans set out today by the City of Edinburgh Council to support the measures intended reduce through traffic and improve the air and noise pollution there. The idea of a LTN is to create a people-friendly space and reduce the impact of traffic on neighbourhoods by closing off ‘rat runs’, perhaps allowing children more space to play.

They will add to the many Covid-19 measures introduced in the city in the past couple of months. The council says it will monitor the effects of the changes, and will make amendments if appropriate. They will also talk to the people who live in the area to make any necessary alterations.

One of the reasons for choosing this particular area is that the council has already consulted on the West Edinburgh Link project. This gathered a lot of support for the banning of HGVs from the streets in East Craigs to enable safer travel by foot, bike or wheelchair. The council already surveyed the traffic in this area in 2019 as regards volume and speed, and they hope that these plans will help to encourage more pupils to walk, cycle or wheel to school.

The majority of those consulted about these plans were supportive of the West Edinburgh Link project. One person who commented on the Commonplace site said:

“Instead of all roads being through roads, block off most of the roads to create safe cul-de-sacs for residents to use. I’ve always felt the Craigmount area would be perfect to trial this but much of the city could potentially benefit.”

The key changes being introduced as part of the LTN in East Craigs include:

Transport and Environment Convener Councillor Lesley Macinnes said:“We’ve been working hard to introduce a package of measures across the city that will make it easier and safer to get around, to spend time in local high streets and to return to school as restrictions are lifted.

“Many of these changes respond to feedback from the community, and in East Craigs we know that local people want to see conditions for walking, cycling and travel by public transport improved. The range of interventions we’ll be implementing will create safe, people-friendly streets by reducing speeding and opportunities for rat running. Vehicle access will of course be maintained for residents.”

Transport and Environment Vice Convener Councillor Karen Doran said: “These temporary measures are supported by previous research and feedback and will benefit the community as they return to work and school. We’ll be closely monitoring their impact and drawing from this as we work to develop a long-term LTN for the area, as part of WEL. Of course, there will be further consultation with the community before any decisions on permanent schemes are made.”

The recent changes made by the council to roads and streets in Edinburgh in terms of the Covid-19 emergency legislation have not met with universal approval, according to the local MSP.

Edinburgh Western MSP, Alex Cole-Hamilton launched a petition asking the council to suspend the Craigs Road new traffic plans to allow for a full consultation. So far, just over 1,300 people have signed it.

The petition was headed up Spaces for People and narrated the reason for signing: “We the undersigned call on the city council to immediately suspend the Spaces for People traffic alteration proposals for North Gyle, Craigs Drive, Craigmount and East Craigs and to undertake a full public consultation of all residents and local businesses affected by the planned, far reaching changes. We absolutely recognise the need to improve active travel while reducing unnecessary car journeys and air pollution, but also believe in the principles democratic consultation which have not happened in the development of these proposals.”

Mr Cole-Hamilton said: “These major road layout alterations came totally out of the blue. The city council should suspend the proposals to allow for a full public consultation with residents and local businesses.

“I absolutely recognise the importance of improving active travel and reducing the number of unnecessary car journeys to improve air pollution. However, it is only fair that the local community gets a chance to respond to significant changes like these. Even councillors were only given five days warning. If projects like these are to be a success, they should not be imposed on residents.”

We asked Mr Cole-Hamilton for a further comment in light of the fact that no consultation is required by The Scottish Government. He replied: “The Government released these funds to improve our streetscapes for active travel during lockdown. That meant widening pavements and pedestrianising certain roads. The East Craigs proposals go far beyond that with the introduction of penalised bus gates, filtered permeability and road closures. With Lockdown all but ended, it’s not clear whether the measures meet the original intent of the government’s vision so it’s only fair that local residents get to have their say on these sweeping changes.”