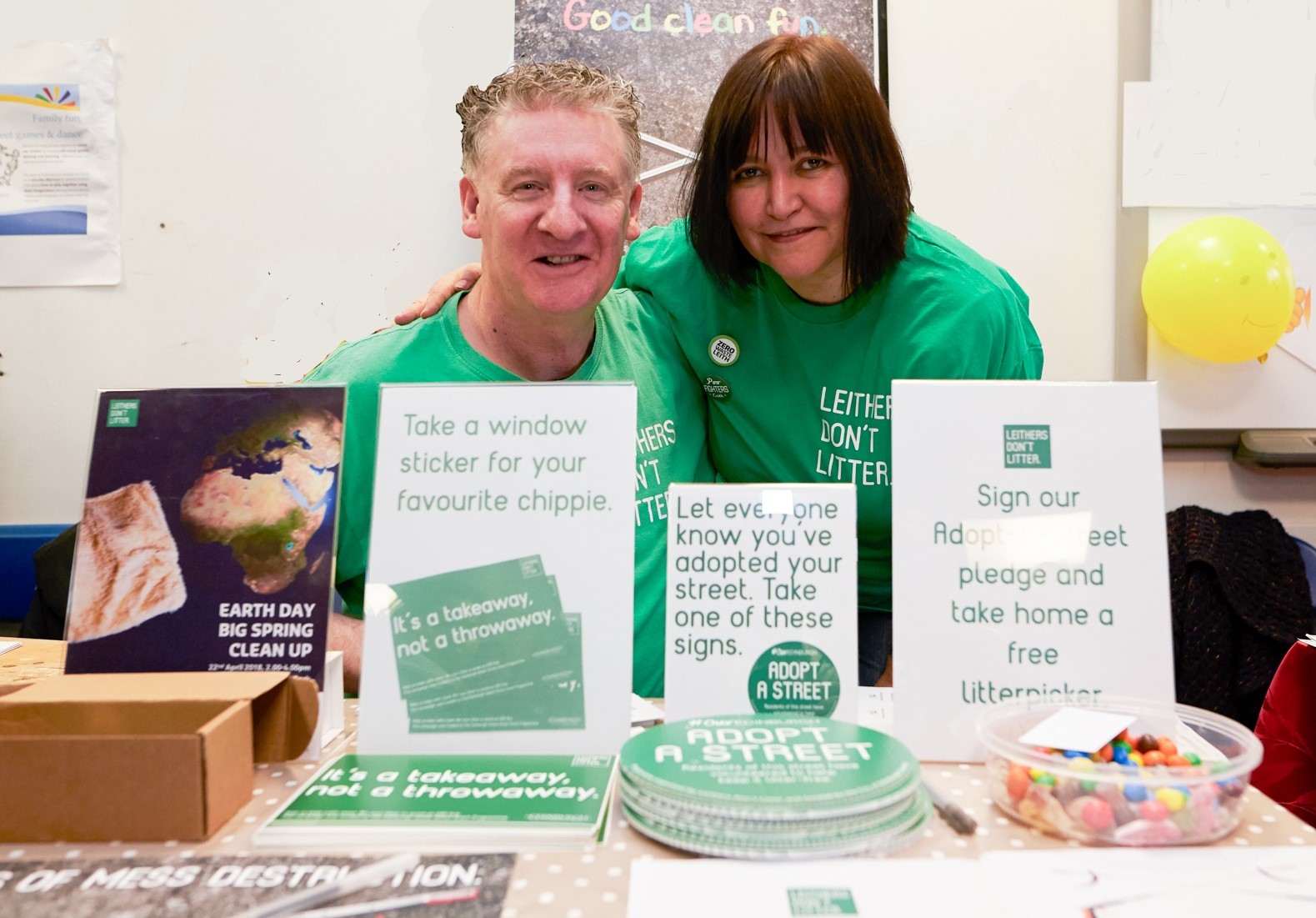 Leithers Don’t Litter was set up by Zsuzsa Farrell and her husband Gerry and it will end almost five years to the day that it started in August 2015.

This will be a loss to Leith and to Edinburgh. There have been many campaigns in the last five years like The Pukemons, Crapitalism and Flyspotting.

Using their professional creative skills they made films for the Have You got the Bottle? campaign which has resulted in The Scottish Government introducing a deposit return scheme. Although the announcement was made in May 2019, the scheme will not be introduced until July 2022.

The Farrells are passionate about litter and getting rid of it off our streets.

After complaining about litter on Edinburgh’s streets for a couple of years ZsuZsa put her money where her mouth is and started to pick it up. But she also organised volunteers into a litter picking group and they have become well known in the city for their inventive slogans and campaigns.

Zsuszsa explained that the biggest reason was due to the pandemic. She said: “Obviously we will still pick up litter around our house, but we don’t plan to do it in an organised form as previously. Mainly we are giving up the group litter picking days due to Covid-19. It is difficult to know now what we can and cannot do.”

Leithers Don’t Litter used to hand out litter pickers and reusable gloves and the council would then pick up all the bags at the end of the litter pick. This was generally marked with a social gathering and some food and drink handed around. All of this becomes more difficult to organise during a global pandemic, and even in the wake of it.

For Zsuzsa and Gerry the social part became just as important as the cleaning of the streets around Leith. So where did Zsuzsa get her inspiration from?

She takes up the story: “Five years ago the reason I started was basically born out of frustration. I moved here in 2013 from Budapest in Hungary and I was shocked by the amount of litter on the streets, and all the abandoned old furniture which was something I had never experienced.

“In Hungary we deal with these things differently. What they do with old furniture there is that the local authorities organise an amnesty day twice a year when people put things that they can’t use any more out on the street. The council then comes to take it away. That works very well and for the rest of the year everyone keeps their old stuff inside their house.

“For two years I kept moaning about it and my husband, Gerry, kept asking me what I was going to do about the problem. One day I was really fed up of my own voice moaning and I said I was going to start a clean up group. He asked what I would call it and the name came to me immediately. I just said ‘Leithers Don’t Litter’ without thinking about it. He laughed and said that it wasn’t a bad name from a foreigner like me!”

I asked Zsuzsa if the name was intended to be a statement or an instruction – as of course it can be understood both ways. She explained that at a school one day she asked if it was true that Leithers Don’t Litter – and of course one child got it immediately and understood it as an instruction. But with adults who are much more literal they have very often taken a different view of the name.

Zsuzsa said: “I got slagged off. People always replied that people in Leith do litter!”

The organisation grew surprisingly fast. They used the Leith Walk Police Box where they collected email addresses from those who were interested in helping. When they were contacted about the first big community clean up, between 50 and 60 people turned up.

But it started with Zsuzsa and Gerry actually doing this themselves. She recollected: “We used to go out and pick up litter ourselves. It was always a good conversation starter, as many people wanted to know if we were getting paid for doing it. Then one day one of our neighbours told us that their daughter said she had stopped dropping any litter just because she had seen us out collecting it in the street all the time.”

That made it all seem worthwhile and the pair were invited to speak at schools, nurseries and kindergartens where they offered a presentation about their work and why littering was so bad.

We wondered if this inspiration had spread anywhere else in the city?

Zsuzsa replied: “I have had some messages from people who have started community clean up groups elsewhere in the city and they have told me that we were the inspiration There is a group in Corstorphine for instance which said they started because of Leithers Don’t Litter. Also there is a smaller group on Restalrig Railway Path. There are other Scottish local authorities who have contacted us asking for advice.”

They are both advertising professionals and Zsuzsa said that this has been a joint effort using Gerry’s genius ideas like the Crapitalism exhibition in 2016 and other snappy slogans. The posters they used twisted other people’s advertising slogans. Such as Macdonalds who have the slogan saying I’m Lovin’ It – and they twisted that to say ‘I’m not loving it’. Tesco’s Every Little Helps became ‘Very Little Help’.

Zsuzsa said: “I’m very proud of the ‘Weapons of Mess Destruction’ because I came up with that one.”

It literally means the litter pickers used in all the community litter picks.

Zsuzsa continued: “That helped us promote the Adopt a Street programme which we ran and the council provided the litter pickers. The way it worked was that when people signed the pledge they emailed it to me and they went to Leith Library to pick up their litter pickers. I don’t know how this programme will continue after we finish. My intention is that we still have around 30 sets which we used for the community clean ups. We would like to give those away on 15 August at the Leith Market where we have a free stall . It will be five years almost to the day since we started the organisation.

“I’m going to create an event on our Facebook page to promote this and invite people to apply for them. Whoever is in the first 30 to send us their pledge will be able to pick up their litter pickers at Leith Market on 15 August. This is perfect timing as we set out with the organisation on 16 August 2015 so we will be exactly five years old when we finish.

“So we can then celebrate and make it a fun day not a sad day. We have made so many friends with Leithers Don’t Litter – that ‘s been the best part of the whole thing really.”

Funding for the project was easier at the beginning as there was a Waste Action Grant which funded the rubbish exhibition and a feature in the Leither magazine, made posters and window stickers for takeaways. That money went quite a long way.

£eith Chooses and £eith Decides also awarded some funding from their participatory budget scheme to keep it all going, and from that the organisation began their Adopt a Street programme. But that has become increasingly difficult in the last two years. The participatory budget had less money and had to be more targeted. It meant that Leithers Don’t Litter could not apply for funding. This has been a big contributing factor in deciding to stop now.

Zsuzsa said: “We didn’t just want to be a litter picking group. We are both communication professionals with our own advertising agency We believe in the power of communication – that it is able to change people’s hearts and minds and behaviour. Without that and without the ability to have proper community gatherings for clean ups we just saw that there is no point in continuing.

“Adopt a Street is a good legacy because now we have 250+ people who pledged including schools and businesses. I think that will make a difference in the long run in that if your neighbour see you cleaning up your street then they will think about it too.”

If the council or indeed any other organisation want to take Adopt a Street on then they could easily do so. But in the end it all comes down to energy and resources.

When Leithers Don’t Litter presented a deputation to the council some time back they suggested to councillors that they could make this part their own as it was so successful.

She said:”People are quick to criticise the council’s waste team but if they took responsibility for their rubbish and unwanted stuff then we would not have half of the problems we do.”

The advertising agency, Gerry Farrell Ink, has always been the money making part of the duo’s relationship while Leithers Don’t Litter was their volunteer passion project.

Zsuzsa concluded: “We never wanted this to be anything else. We didn’t want to register as a charity or social enterprise. We thought that if we remained volunteers in the truest sense of the word that that would be best for us. We obviously want to be a part of the community we have strong ties with other organisations like the Citadel Youth Centre. We have worked with them in the past and we will continue to do so.”

Leith councillor Gordon Munro said: “Those that have adopted streets or even cycle path have said they will continue to do so. I think if we can continue this active citizen approach we should support it. I pushed for this at the beginning and brilliantly one of the officers used his discretion to authorise purchase of litter pickers and gloves for those that signed a pledge to clean their street. This joint responsibility is the way forward .

“My favourite campaign was ‘Poo Fighters’. It raised awareness and made clear that street bins could be used for dog waste. It has helped although still an issue in parts of Leith.

“I have been involved from the beginning and have taken part in most picks. Passing people have said ‘thank you’ to pickers and I even had some say to me ‘surprised to see you doing this but glad you are , thanks’. I think it has made a huge difference and has helped changed views although there is still a long way to go to change the ‘throwaway culture’ . They called it ‘Leithers don’t Litter’ because they do litter and wanted that pride of Leith to extend to keeping it clean. I thank them for their hard work .”