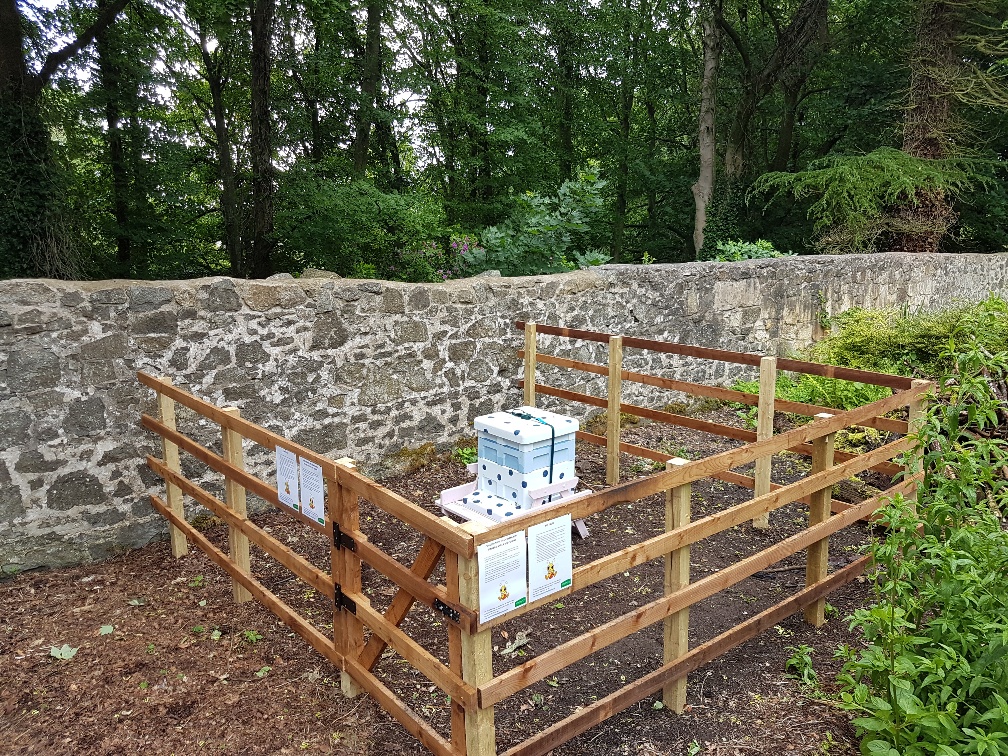 It was only last week that the council’s Natural Heritage Officer, David Kyles, was excited to unveil the new beehive in Corstorphine Hill Walled Garden. The beehive had been loaned by local beekeeper, Julia, at no cost to the council, other than putting a wooden fence around the area where the hive was sited.

This week it is a different story as vandals struck sometime between Sunday evening and Monday late afternoon causing serious damage to the hive. It is believed that whoever is responsible threw large stones and rocks at the hive, leaving gaping holes in the exterior and agitating the bees inside.

The local beekeeper is a member of the Scottish Beekeepers Association, and knows all about the benefits of introducing bees into an environment such as that on top of Corstorphine Hill. The real loss is of course the hive which was seriously damaged, but also the loss to the biodiversity in the walled garden which would have flourished wth the bees pollinating all the flowers there.

Julia told The Edinburgh Reporter: “I was looking for somewhere public to share my bees and help to educate people about them. I just assumed people would want to support it, so I was extremely shocked and disgusted about it. Bees are struggling in the wild, and it is beekeepers like me who are keeping them going. Without them the food chain would collapse.

“The bees are fine and back home with me. They are resilient you know. However, it is just as well that it was not wasp season as wasps would have gone into the hive and killed all the adult bees and their babies. There were about 40,000 to 50,000 bees in the hive. It is a shame that someone has done this. What does it say about them?”

David Kyles explained to The Edinburgh Reporter: “It was a lot of effort in locating the bees from somewhere close to Corstorphine, relocating them and getting them into the Walled Garden. Sadly they only lasted a week before they were targeted.

“There’s always anti-social behaviour in parks such as litter, camping, fires and cutting down trees. I’m almost immune to that because it comes with the territory. This was a bit different. It was a targeted wilful act of destruction against the beehive and it was pretty clear that the bees were in there.

“We had lots of signs round about to tell people how to behave round about the bees and what to expect. We had put a timber rail up to keep people at a distance from the bees, as well as explaining some interesting facts along with a request not to throw things or prod or poke the hive. For some people there might have been that appeal, but it’s disheartening to think that someone would pick up cobble stones or bricks and actually throw them at the hive to dislodge the boxes.”

The Friends of Corstorphine Hill secure the walled garden at dusk and open it again each morning. It was checked on Sunday night at 9.30pm when the bees seemed fine. The vandalism is thought to have occurred between then and teatime on Monday 13 July 2020.

David continued: “We do have beehives elsewhere in public parks in Edinburgh and we thought the walled garden here would be a perfect place with all the floral diversity for nectar loving insects.”

This is a local nature reserve and part of that commitment is to provide outdoor educational facilities. So that was going to be an added bonus of having the bees in the garden which is for the moment lost. The beehive has been removed, and the council officers are considering a more robust solution which might be used in future, including CCTV cameras.

The hill is a large area and David told us he regularly gets reports of trees being damaged or hacked down, abandoned campsites and graffiti. The network of dog walkers who use the hill keep in touch with him to advise of any anti-social behaviour.

The matter has been reported to the Wildlife Crime Liaison Officer at Police Scotland for investigation. If you were near the Walled Garden and saw anything then please do get in touch with the police.