This performance, recorded remotely, is full of messages to the NHS and key workers helping us all through the global pandemic.

Kieran Brown is co-founder of Scots in the City, and he came up with the original idea.

Kieran who hails from Falkirk, set up Scots in the City with actress Shona White to promote the very best of Scottish culture outside the motherland, with a focus on Musical Theatre. Kieran studied at the Royal Scottish Academy of Music and Drama, graduating with an honours degree in Acting. As a seasoned West End professional, he has understudied and played the role of The Phantom in The Phantom of the Opera and recently performed in the UK and World tours of Titanic.

Alex Norton (Taggart/Two Doors Down) said: “As Joni Mitchell says in her song, Big Yellow Taxi, ‘Don’t it always seems to go, that you don’t know what you’ve got till it’s gone.’ It’s more important than ever that we protect our NHS. Stand up for the greatest monument to civilisation and humanity the world has ever known.”

Steven Cree (Outlander) said: “It was a privilege to be invited to take part in this tribute and thank you to the NHS. Their value and importance have never been more apparent in my lifetime than now, and I sincerely hope that people continue to show gratitude, support and respect to our fantastic health service. It must never be privatised.”

Kieran said: “Whilst the NHS charity is highlighted, we would like to dedicate the video to every one of our key workers who have kept the country going – from delivery drivers, shop workers and postal staff, to bin men, lorry drivers and teachers … the list is endless. We owe all of you a huge debt and this is a thank you to each and every one of you.  Alongside our stars who have given their time and talent, I’d also like to thank James Doughty for creating the original track, Ben Dovey for his gorgeous orchestrations, Tom Crofton Green for violin skills, Chris Matanle for artwork, and Ben Hewis for stitching it all together and making it look and sound so moving.” 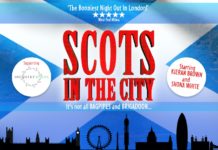