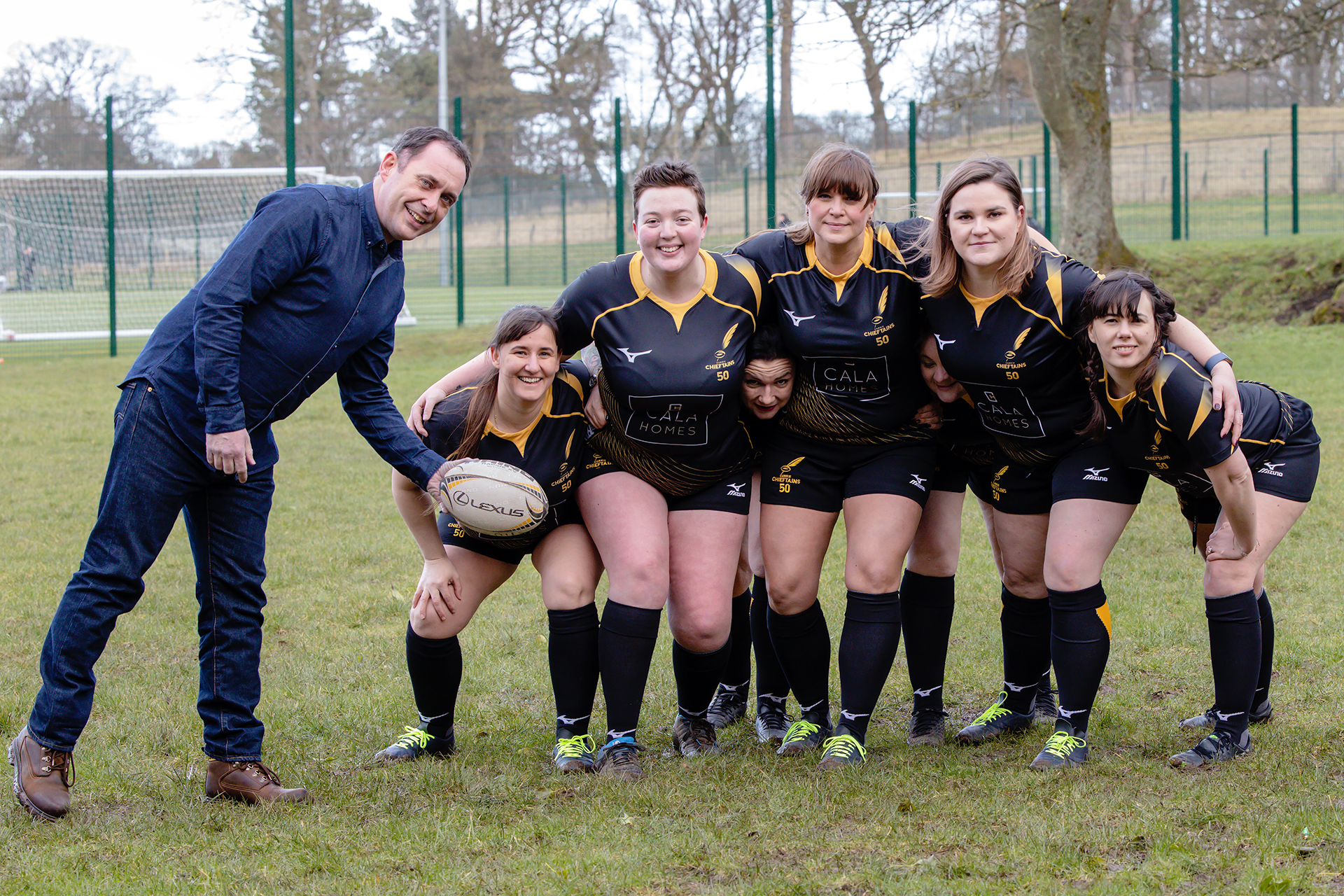 Housebuilder CALA Homes (East) has continued its long-term support of rugby club Currie Chieftains by extending sponsorship to its emerging and popular women’s and girls’ teams.

For more than eight years, the company has been lead sponsor for the club, including its successful first team, helping them to bring social and sporting value to the surrounding area.

With an inclusive adult women’s team forming for the first time in November 2019, CALA has now invested a further £2000 sponsorship towards the women’s and girls’ teams.

This will enable the teams to buy their own bespoke kit, and will help with ongoing equipment costs. The funding will also help the Malleny Park-based club create more accessible facilities and gym equipment to attract further new members.

Susan Lee, Team Manager for the women’s and girls’ teams, said: “Our new adult women’s team has taken off at a rapid pace.

“We’re welcoming all abilities and ages, including those who’ve never played. It’s proving an amazing outlet for women and girls, whether they are looking to get fit and build confidence, or make new friends. A blether after training is a must!

“What’s lovely, is that it’s also helping mums to bond with their sons and daughters through the shared experience of playing the sport.

“As you might imagine, we’re absolutely thrilled with the sponsorship from CALA. Having our own top-quality equipment is helping deliver training sessions which can be tailored to our player’s individual development.

“It’s also great to see more and more signing up to our girls’ teams, which will allow our female mini players to continue playing at Currie Chieftains after P7, as mixed rugby at S1 and above is not permitted under SRU rules.”

While the initial focus for the new women’s team is building the team, fitness and ability of its individuals, they have identified some upcoming friendly competitions that could provide the perfect first taste of competitive rugby.

Fergus Scott and Matias Argiro, both first-team players with the men’s team, provide expert coaching for the younger girls, while Laura Key, who plays for University of Edinburgh is training the adult team.

Derek Lawson, Strategic Land Director with CALA Homes (East) said: “In developing its girls’ teams and creating a new adult team, this club is extending its positive influence within the local area further.

“We’re thrilled to be able to reflect this with our support. We’re active selling homes from two developments in this community – so are very conscious about giving back for the greater good of everyone living here.

“It’s also key that we ensure new people moving into the area can benefit from a thriving social and sporting scene – and that’s exactly what the Chieftains are providing.”

The club, which was conceived by six rugby enthusiasts who met in a Currie pub and founded in 1970, built its reputation on a 25-year climb from the Edinburgh District League, Division 2 to reach the top-flight Scottish Premiership in the mid-1990s.