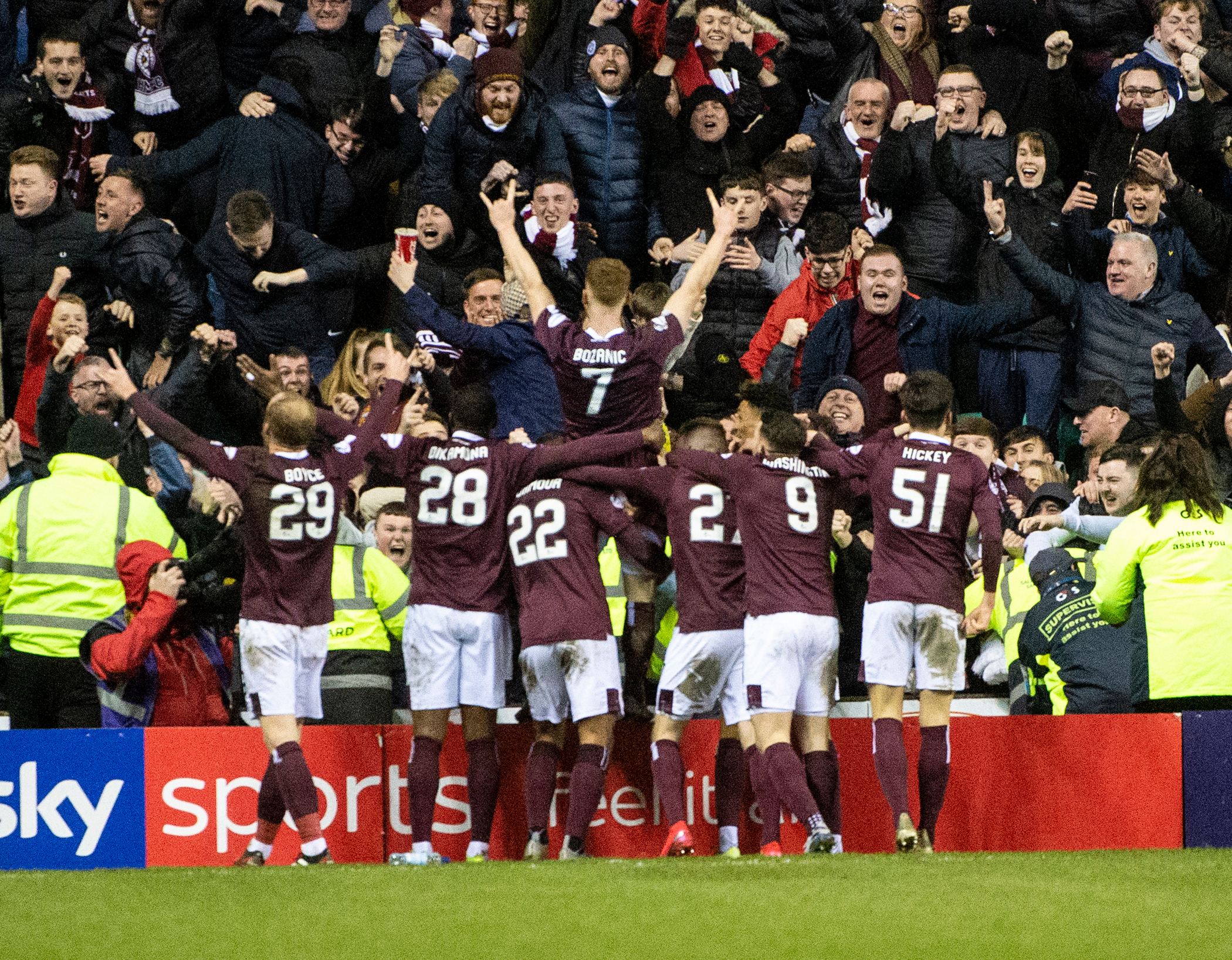 Hearts moved off the foot of the Ladbrokes Premiership table tonight after a dominant Edinburgh derby win at the home of their city rivals. Three second half goals from Sean Clare, Ollie Bozanic and Conor Washington gave Daniel Stendel’s men a thoroughly deserved victory – their second at Easter Road this season.

Hibs pulled back a late goal through Melker Hallberg, but it was far too little too late for Jack Ross’s team who may face retrospective punishment for Marc McNulty’s stamp on Sean Clare in the first half- an incident missed by referee Kevin Clancy and his assistant.

The home side made one change from the team that defeated Inverness Caledonian Thistle in the Scottish Cup – Omeonga replacing Whittaker. There were two changes to the Hearts line up from Saturday. One was enforced – Dikamona replacing the injured Souttar while manager Daniel Stendel opted to leave captain Steven Naismith on the substitutes’ bench. His place in the starting eleven was taken by Liam Boyce. Craig Halkett was made captain for the evening.

Easter Road was close to full as the televised Edinburgh derby got underway. The two teams will meet again next month in the William Hill Scottish Cup semi-final but there were more pressing matters in Leith on a cold early March evening. Hibs were keen to keep their momentum that has seen them challenge for a European place while Hearts, buoyant after knocking Rangers out of the cup on Saturday, were desperate for league points to lift them off the bottom of the table.

On a difficult playing surface the visitors started the game impressively and Craig Halkett forced Hibs keeper Maricano into a fine save in the early stages. Liam Boyce them missed a golden opportunity to give Hearts the lead when he headed wide from eight yards out with no Hibs challenge forthcoming. But the real talking point of the first half was when Marc McNulty clearly stamped on Sean Clare while the Hearts man was flat on the pitch near the touchline. Nothing doing said referee Clancy and one can only assume he didn’t see the incident while his assistant may have had his mind on other things.

Although chances were few and far between it had been a decent first half – but goalless. Hearts came out the traps in the second and took the lead in the 53rd minute.  Bozanic’s corner was inexplicably handled by Scott Allan and referee Clancy had no hesitation in awarding a penalty. Sean Clare stroked the ball home and set off to celebrate with the Maroon Army.

Hibs looked stunned and there was worse to come for the home side when Hearts doubled their lead ten minutes later with a stunning goal. Lewis Moore sprinted forward before crossing from the left. Liam Boyce dummied the ball to allow Bozanic to curl a magnificent shot from 20 yards beyond the despairing hands of Hibs keeper Marciano.

Despite there being 25 minutes still to play this was the cue for some of the home support to take their leave. They missed Paul McGinn spurn a glorious chance to get his team back into the game when he was unchallenged inside the Hearts penalty box but headed over the bar with 13 minutes to go. Hibs sensed it wasn’t to be their night, a feeling confirmed three minutes later when Conor Washington broke down the left and fired low past Marciano for Hearts third goal.

The home side did pull one back when Hallberg blasted home from close range, but the game was over by this point. There was even time for substitute Steven Naismith to waste a gilt-edged chance for Hearts fourth, but he blazed his shot high into the stand.

An evening to forget for Hibernian but a result which might, just might, be the turning point in Hearts fight against relegation.

Top man: Clevid Dikamona. The big man covered every blade of the Easter Road pitch – the bits that had grass at any rate…