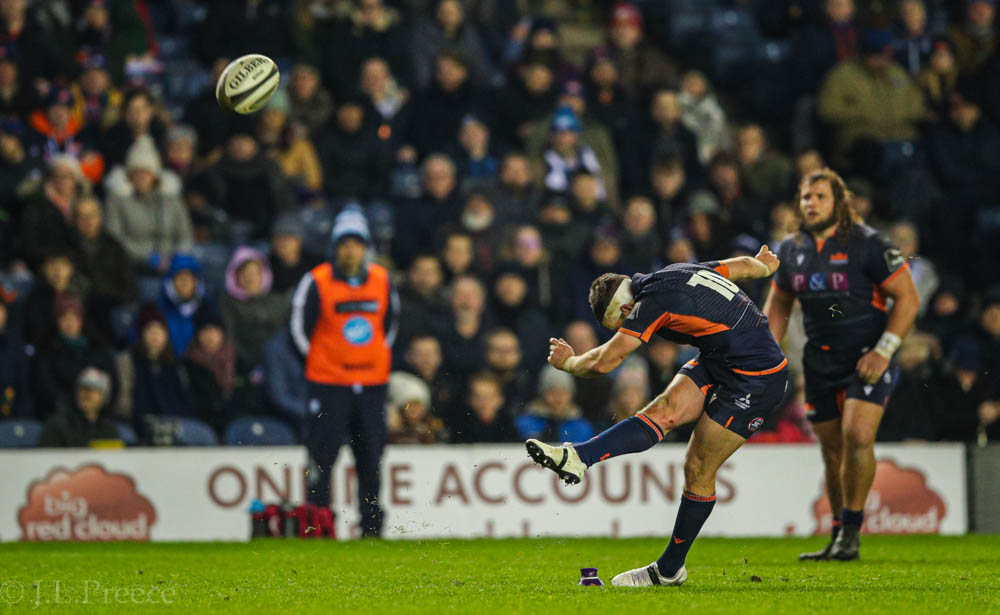 Round 13 of the Guinness PRO14 saw Cardiff Blues make the trip up from Wales to try to put a dent in the hosts’, currently, successful run. Edinburgh, on the other hand, were looking to maintain their form with a fifth win on the bounce to retain their grip on the No. 1 spot in Conference ‘B’.

The first 10 minutes, or so, were spent, mostly, between the 22’s as both sides tried to make inroads, with a fair bit of kicking from the back divisions.

The home side were the first to break through, but they were turned over and the ball cleared, giving Cardiff a bit of breathing space and the chance to gain some ground.

Reward came Cardiff’s way with an 11th minute penalty which, former Edinburgh 10, Jason Tovey saw over for a 0-3 lead.

Errors from the restart are usually termed ‘coach killers’, but, on this particular restart, late replacement, Dan Fish performed a coach/team/replacements/supporters killer when he ‘cleared’ the ball straight into the charging George Taylor.

Taylor was then alert to the possibilities and followed his charge down through, collected the ball and dived over for the try. Simple as….

Simon Hickey followed up with the conversion attempt, but hit the post, so the score remained at 5-3. Not quite so….

The match then got stuck back in the same routine as before with both sides trying to break down the opposition and the opposition resorting to loads of kicking. Both sides big ball runners had the defence scrambling at times, but the decisive breakthroughs never came.

The Blues did, however, make more slightly of this period and their pressure told as another penalty went their way in the 24th minute, but Tovey just pulled his kick left of the uprights, so the hosts retained their narrow lead.

Five minutes later, it was Hickey’s chance to score through a penalty, but he hit the same post as before. Two minutes later, he got another go and scored to make it 8-3 to Edinburgh after 32 minutes.

As the match approached the break, Cardiff gained the upper hand for a time and forced the Edinburgh defence onto the back foot. Despite the pressure, however, they eventually settled for another Tovey attempt at goal right on the whistle.

This time the 10 was successful and the sides went into the break at 8-6 to Edinburgh.

The early second half was much the same as the late first, with neither side able to take control of the match and play just tended to rumble about in the middle of the pitch.

The first incident of note came just before the 50 minute mark when Tovey was bundled over by Edinburgh’s Pierre Schoeman. Unfortunately the Cardiff player crashed into one of his own, and, following a lengthy stoppage, was taken of for an HIA.

With Tovey off permanently and Cardiff reshuffled, Edinburgh gained a bit of an upper hand and enjoyed more time in the opposition 22 than had been the case up to that point.

However, the Welsh defence held firm and the match lurched back into the arm-wrestle of before with a lot of time spent resetting scrums.

Gradually, Edinburgh began to exert some sort of dominance over the match and went close to adding to their try count as Schoeman and Nick Haining made dangerous runs at the defence, gaining much needed territorial advantage for the home side.

A cross-field kick from Hickey was almost collected by Eroni Sau, but Cardiff’s No. 23, Ioan Davies challenged well and Sau lost the ball forward..

The next chance came a few minutes later following another period of Edinburgh possession in the Blues’ 22, the final ball coming as another cross-field kick from Hickey, but the the opposite wing.

This one was dealt with successfully by Duhan van der Merwe as the big South African winger held on and fought through to the line, crashing through a couple of defenders on his way.

Just as he was close, the self-same Davies, aided and abetted by another ex-Edinburgh man, Jason Harries, bundled van der Merwe over the corner flag and into touch.

But, it was back for a penalty and Tovey stretched the lead out to 11-6 with eight minutes still to play.

Although Cardiff did their best to score next, they couldn’t break down the home side and, another penalty for Hickey in the 78th minute meant that Edinburgh finished off the match 14-6 winners.

So, no bonus points for the either side in a fairly turgid encounter at BT Murrayfield, the only match ‘bonus’ going to the crowd as the final whistle meant they could, finally, go home….