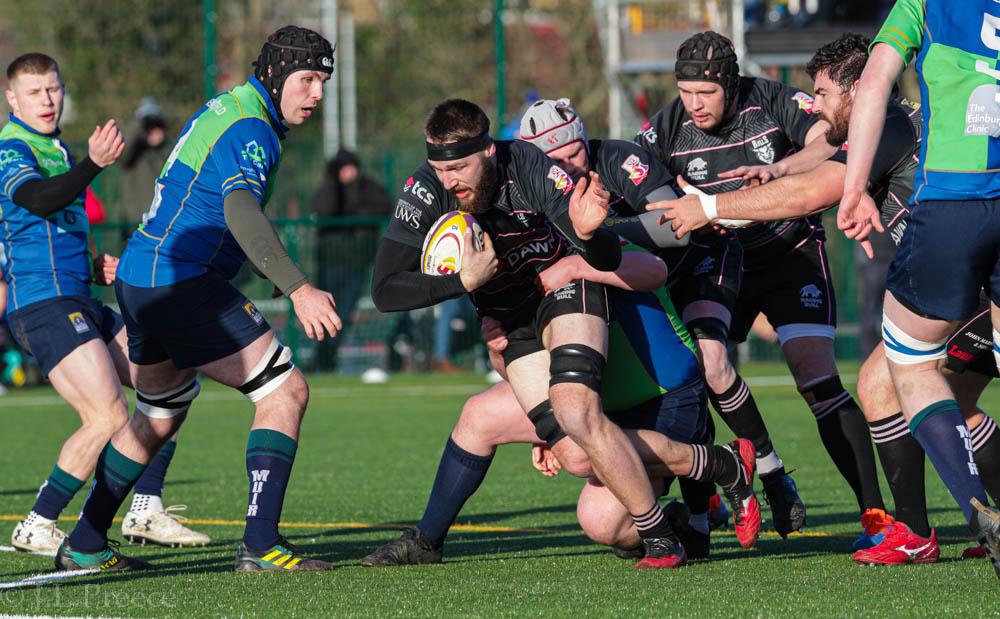 Thanks to the recent wet weather, Queensferry RFC’s artificial pitch was ‘home’ for Boroughmuir Bears at the weekend as they played Ayrshire Bulls in the latest round of the FOSROC Super6 competition.

Despite a decent start to the season with some close results, the Bears seem to have been nailed to the bottom of the table as the others have piled on the points whenever the Meggetland side are at the other end of the pitch.

However, it was that ‘Meggetland side’ that opened the scoring on Sunday as stand-off, Chris Laidlaw, took advantage of the strong wind to nail a long-range, fifth minute penalty for 3-0 after absorbing an early period of attacking from Ayrshire.

Ayrshire then continued to pile on the pressure from the restart, allowing the opposition very little ball. ‘Muir, for their part, defended well and turned over the attack a couple of times.

The first real assault on the line came down the left as a grubber, slotted through the defence was almost picked up, but the chaser was heaved into touch just short.

Returning ball from the clearance, the visitors made easy ground, as the tackling was a touch weak in places, and were soon in a position to endanger the Bears’ line. The final pass out to flanker, Pete McCallum, left the 7 with an easy trot in under the posts.

Tom Jordan then followed up with the conversion for 3-7 after 16 minutes.

After 17 minutes, it was 10-7! From the restart, the hosts kicked long and the chasing pack found themselves deep in the Bulls’ half. Quickly regaining possession, the Bears piled in and Archie Russell found a gap to get in under the posts.

For a couple of minutes, at least….

Ayrshire returned to the fray with a powerful drive into the Bears’ 22, setting up the final ruck right on the line. From here, hooker, Sam Kitchen, smashed through the pile of bodies for the try. An unsuccessful conversion for Jordan left it at 10-14 after 20 minutes.

This was to be the point, at which, the Bulls ramped up the pressure on the opposition defence and pushed ‘Muir further and further back into their own 22, spending most of the next 10 minutes trying to manufacture a breakthrough.

Most of the hard yards – interrupted by a brief flare-up – were made through the pack and they got their just reward in the form of flanker, George Bordill, who burrowed through under the posts for 10-17 before Jordan made it 10-19 with the simple kick.

As the half drew to a close, Boroughmuir showed what they were capable of and carried out a sustained assault on the Ayrshire line. However, the defence held out and the half finished 10-19 the the Bulls.

Five minutes of the second half were all Ayrshire needed for the bonus point as, once again, their forward pack came up with the goods – Nicolas Griffiths being credited with the score. With the conversion, it was now 10-26.

Boroughmuir, once again, came back into the match with a vengeance, pouring on the pressure and making the opposition scramble a couple of occasions in defence.

Reward came by way of a breakaway from deep, the final pass from to ‘Muir’s Glen Faulds handing them a converted second try for 15-26 after 62 minutes.

Once again, the bulls came straight back and, over the following five minutes, they scored another two converted tries – a couple of yellows for Boroughmuir easing their way – from James Pinkerton and Tyler Beary rounding off a successful cross-country trip for the Ayr side.

Boroughmuir did rally and threaten the Ayrshire line late on in the game but, by then, they were playing for pride and the match finished at Boroughmuir 17, Ayrshire 40.