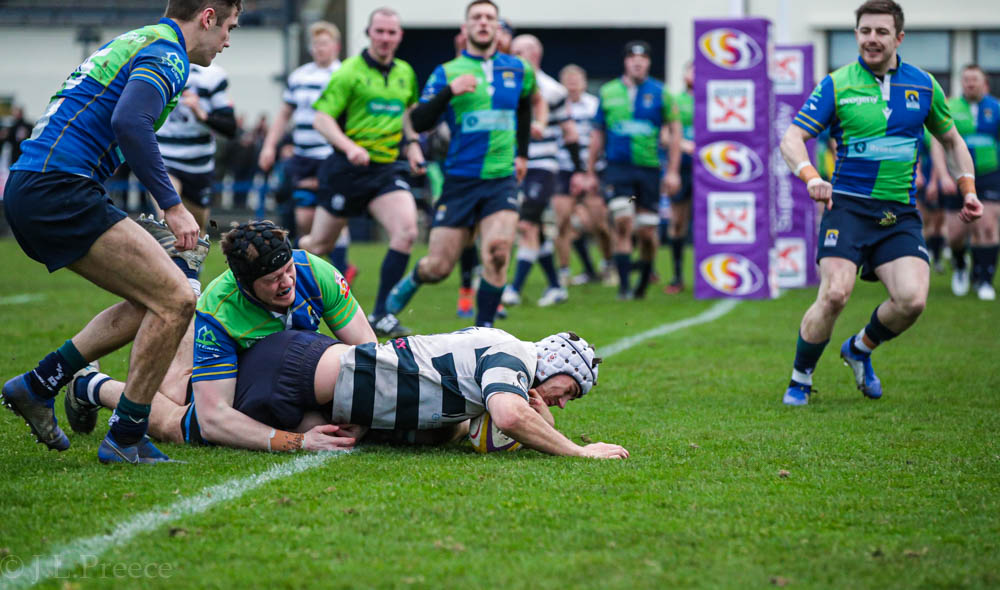 Heriots Rugby welcomed Boroughmuir Bears for a local FOSROC Super 6 match at Goldenacre for their Round 8 match in the new – for this season – competition. Heriots were looking to maintain their top three place while the Bears were trying to claw themselves free of the bottom end of the table

That place maintenance was looking good for the home side as, after a brief period of Bears’ possession, they came back and put Cameron Hutchison through down the left for the opener making it 5-0 after three minutes.

Boroughmuir saw a lot more of the ball over the next period of play, but couldn’t work themselves out of their own half and were forcd to kick clear on a couple of occasions.

As the match approached the 15 minute mark, Heriots were encamped in the opposition 22 and managed maul the ball over the line from a line out, but couldn’t get the required contact with the grass.

The resultant scrum was a touch messy, but got messier for the Bears when their scrum half, Tom Wilson was binned for ‘several’ infringements at the Heriots’ end of the scrum.

Going for the scrum again, the ball was quickly whipped across the field and wing James Couper finished off the play with a try in the same corner as before for 10-0. However, the kick was missed again in what was to be a trying day for Heriots’ kicker.

The third try followed less than five minutes later. Taking advantage of the extra man, Heriots’ were soon back on the offensive and flanker Iain Wilson smashed his way over from close in for 15-0.

The Bears then enjoyed their first period of sustained pressure on the Heriots’ line as they went to work, forcing the home side into several desperate defensive plays and eventually won a penalty in front of the posts which Martin Cimrich chipped over for 15-3.

They then came right back into the match with another period of pressure on the home try line, but, again, Heriots were up to the task and kept them at bay.

What was, probably, the final nail in Boroughmuir’s coffin came at this time as a loose pass was intercepted and and Heriots were away.

Couper looked to have got clear down the left, but the hard running Jordan Edmunds tracked him down and stopped him a few meters out.

But, the match was back inside the bears’ 22 and the bonus point try soon followed. Off the back of another ‘held up’ scrum. The home side mauled over the line again, but this time, they it was collapsed leading to a penalty try and bonus-point – a 22-3 scoreline and another yellow, this time for Dan Winning.

A fifth try just on the break – and second for Couper – sealed the match for Heriots as the opposition just couldn’t get a foothold on the game and the half time score of 29-3 made it look like it was going to be a long second half.

And so it proved to be. An early try for Andrew Simmers was followed, at varying stages, with another three, the final two coming in the closing minutes.

Boroughmuir put in a more spirited performance in this half, scoring their lone try, via Jordan Edmunds – a neat offload from Archie Russell putting the winger through – not long after Simmers’, and spent a fair bit of time in the home 22. Too many errors, though. But, on the whole, Heriots never looked like relinquishing their early lead and now go into the remainder of the season with a home play-off place firmly in their sights.