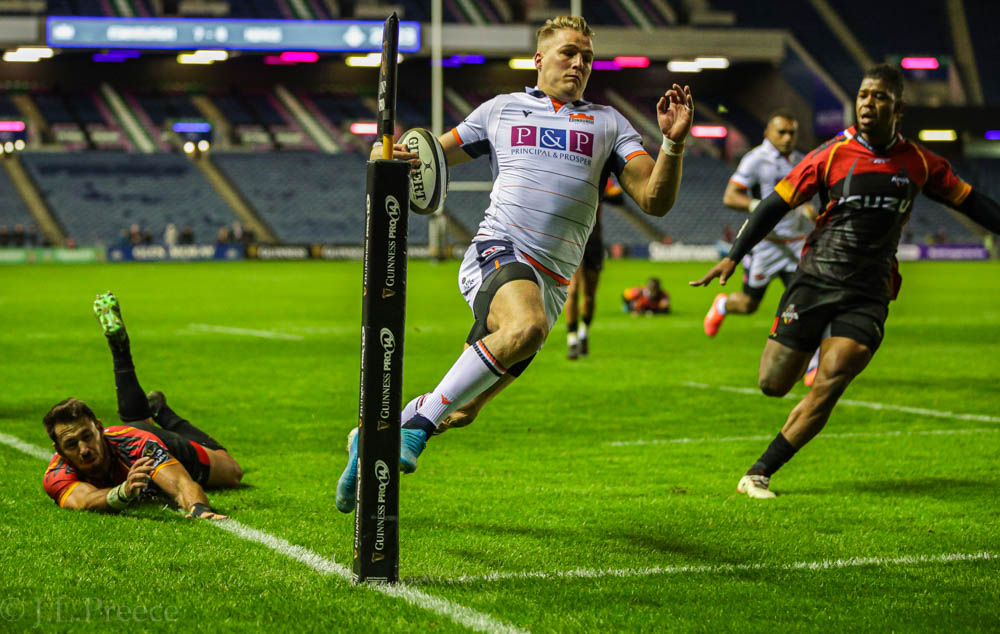 The first match of 2020 at BT Murrayfield saw South African side, Isuzu Southern Kings, take the field to face an Edinburgh Rugby side flying high in the Guinness PRO14’s Conference ‘B’. With only one win, so far, this season, the visitors would be hoping to kick start the New Year with a second in the capital.

Early on in the match, that hope was looking up. Edinburgh had the first, serious, line break a few minutes in when a kick slotted through saw Duhan van der Merwe just beaten to the ball in the opposition 22, but it was the visitors who, probably had the upper hand.

As they gradually worked their way into Edinburgh’s half, they looked more and more likely to be the first on the score board and, 10 minutes in, that proved to be the case.

With a path through seemingly blocked, a superbly weighted kick over the top from stand-off, JT Jackson, was chased and pounced on by their No. 11, Erich Cronje for the opening score. Cronje’s boot deserted him for the conversion, but, 10 minutes in, the ‘underdogs’ were 0-5 ahead.

They were maybe 0-5 ahead, but they were soon down to 14 men. As the Kings were preparing to return a high ball, Edinburgh’s John Barclay flew in to tackle Pieter Scholtz on the edge of the 22. Scholtz stuck his arm up to defend himself but, in doing so, he struck Barclay in the throat with his elbow.

Play carried on, but at the next stoppage, referee, Joy Neville, had a wee message in her ear to check back. The replay of the incident did Scholtz no favours and, while it probably wasn’t malicious, an elbow to the throat, or above, is a straight red, so the visitors were now down to 14 men with only 13 minutes played.

Edinburgh kicked to their penalty to the line and, in the simplest of roll-overs, they rolled over the Kings’ pack to thrust Mike Willemse in for the try. Jaco van der Walt, then followed up with a successful conversion for 7-5 after 14 minutes.

With their tails up, it wasn’t long before the home side manufactured another chance. Starting at the back, the ball was moved quickly forward and Matt Scott made a decisive break to put himself, Barclay and Duhan van der Merwe in a three-on-two in the visitor’s half.

As he was tackled, Scott off-loaded to Barclay who had nothing else to do, but… drop the ball.

Five, or so, minutes later, the Kings were ahead again. A penalty for not rolling away was duly despatched by Jackson for 7-8 after 26 minutes.

Three minutes later, it was back to an Edinburgh lead. A long running nad passing move from the opposition 10 metre line made space on the outside for Edinburgh, for which, van der Merwe needed no further invitation to take advantage of. A gallop down the line, avoiding a diving tackle on the way, saw the big winger over in the corner for 12-8.

Two minutes later, a copy-cat move, this time driven by the other wing, Eroni Sau, saw Matt Scott crash over in the same corner for 17-8. With van der Walt’s conversion, the 19-8 score against 14 men should have seen Edinburgh into half time.

The South African side, however, were having none of it. For the last few minutes of the half, the put enormous pressure on the Edinburgh defence and received their just reward on 39 minutes when they made enough space to put Jackson over in the corner for 19-13 going into the break.

The Southern Kings made a reasonable start to the second half, but, within five minutes, their 14 man side were being pulled all over the place by Edinburgh.

Starting from deep in their own half, another running-passing play found the home side with a huge overlap down the right and James Johnstone finished off the move with an easy score. Van der Walt then slotted home the conversion for 26-13 and a try bonus point.

Over the next 15 minutes, Edinburgh seem to let their enthusiasm run away with them as they let a further two tries slip from their grasp through simple errors, but that was nothing compared to the King’s woes.

Another front row injury with just over 25 minutes left saw them down to 13 men and the onset of ‘non-contested’ scrums, but their night was pretty much over with the player deficit. A penalty try for the home side soon did nothing for their hopes.

Edinburgh took full advantage and in the final 12 minutes, they scored another four tries through Eroni Sau, Dave Cherry, Charlie Shiel and Mark Bennett to seal an emphatic 61-13 victory which at half time, looked a distinct possibility.