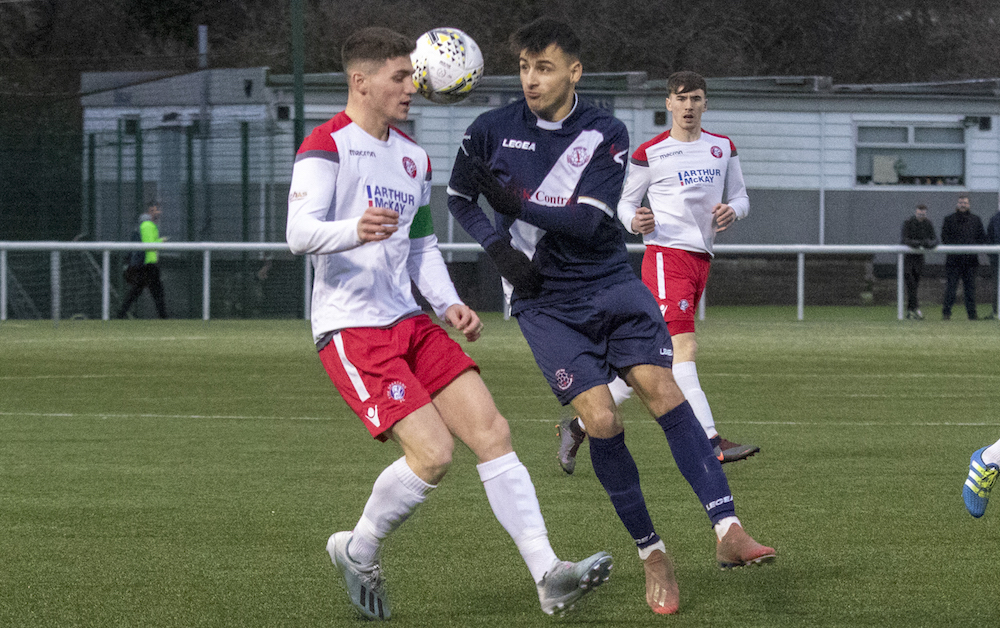 In a tight game of few clear chances for either side, it was a corner routine straight from the Civil training ground that was enough to take the points in the North Edinburgh derby and see Strollers leapfrog the Spartans to go 5th in the SLFL league table.

The goal came midway through the first half. Quick thinking from Ryan Shanley, Andy Mair and Scott Clapperton combined to tee up the onrushing Archie Roue, impressing in his second appearance as a trialist, who topped off the move with a lovely first time curling finish into the top corner from just outside the Spartans box.

Thereafter – until Andy Mair almost doubled the lead in injury time when he spotted Spartans keeper Blair Carswell off his line and floated a sweet 25 yd effort over him and onto the crossbar – it was all about the Strollers redesigned backline, quietly notching up their third clean sheet in four games.

Considering the injuries that Civil have been dealing with, it’s a remarkable statistic – and testimony to the high quality job that Gary Jardine is doing with this group of players. Callum Yeats had his best game in a Civil shirt, shifting into central defence and barely putting a foot wrong alongside the always dependable Mark McConnell. In front of them John Dunn was again a class act and with Clapperton they gave the midfield a solid base to allow the likes of Andy Mair, Ryan Shanley, Craig Newall and Alieau Faye the license to break forward.

Perhaps more importantly for the Strollers confidence – ahead of back to back visits from BSC Glasgow (currently lying 4th) and table-topping Kelty Hearts – it was the first time they had managed to beat any of the SLFL top 5 this season, in the process reversing the 2-1 home defeat to the Spartans earlier in the season. With five of Civil’s next six games taking place at home, it gives the Muirhouse club a great chance to put themselves firmly in the mix for a Top 4 finish come April.

For the Spartans, they came closest to equalising just minutes after falling behind. Breaking forward at speed, Scott Maxwell was played in and his stabbed close-range effort was smartly deflected wide by the outstretched foot of Strollers stopper Josh Donaldson. Moments later Maxwell made way for Jack Smith, who himself was unfortunate not to get on the score sheet with the final act of the half – bringing down a long punt out of defence, and under pressure from the advancing Donaldson, he did well to dink the ball over the onrushing Strollers keeper only to see his finish drift just wide of the Civil goal.

Five minutes into the second half, Strollers came closest to doubling their lead. Shanley linked up well with Alieau Faye whose sharp turn in the box threw off his marker, but the close range finish lacked power and Carswell got down to smother it. Back came Spartans with Aaron Murrell coming closest for the home side – hooking two efforts wide as Spartans shaded the possession statistics, without carving out too many clear cut openings.

Despite the close proximity – both geographically and in the league table – of the two teams, the derby had been played out as a largely good natured affair, until the game flared briefly late on. Referee Jonathan Gall flashed 4 yellow cards – 2 for each side – in the last 10 minutes, along with a straight red in the 88th minute for Spartans captain Adam Corbett. Challenging on the half-way line with Strollers goalscorer Roue, Corbett’s feet were admittedly high as Roue just beat him to the bouncing ball. The decision seemed a little harsh, but the referee was right on the spot, and didn’t hesitate to go to his pocket.