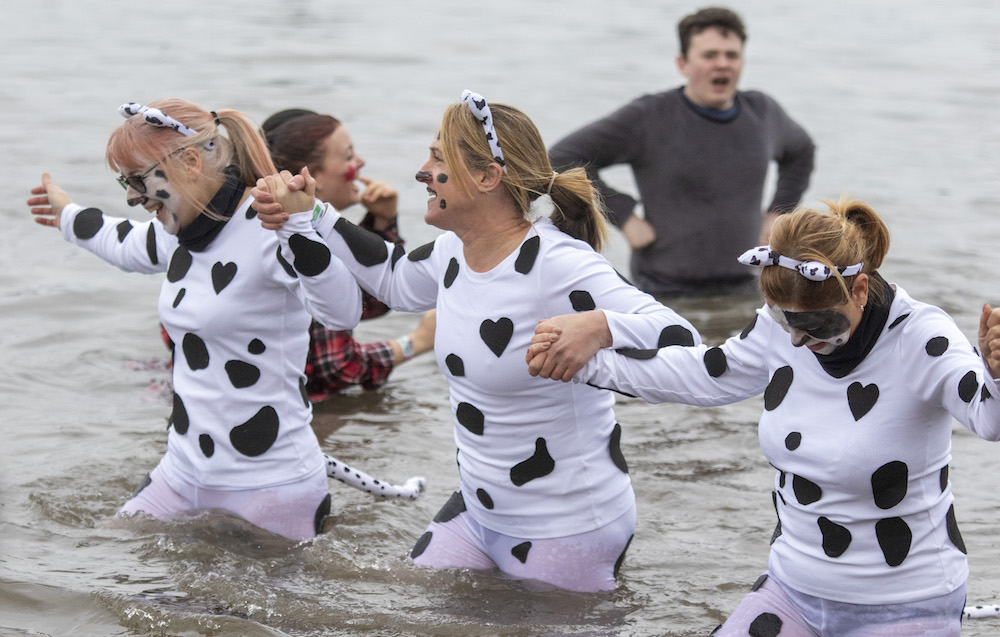 Those who were brave enough gathered on the shore at South Queensferry earlier today to brave the chilly waters of the Firth of Forth for the Loony Dook all part of Edinburgh’s Hogmanay.

1,100 ‘Dookers’ including Ed Bartlam and Charlie Wood co-directors of Underbelly who produce Edinburgh’s Hogmanay on behalf of the City of Edinburgh Council, and Cllr Donald Wilson, Culture and Communities Convener for The City of Edinburgh Council joined the parade through the streets of South Queensferry before taking the dip into the chilly Firth of Forth, between two of the three Forth Bridges.

Thousands turned out to cheer on the brave and bold dookers who were wearing every kind of fancy dress you can think of from the brilliantly crafted cardboard boat and airplane, to Donald Trump, a can of Irn Bru, a T Rex, a pair of lobsters, Mr Blobby and a brave man in a mankini.

People from over 20 countries took to the water raising funds for many charities by doing so.

The fancy dress competition was won by four friends – Laura and Niamh in their superb cardboard boat The Maid of the Forth, Jack as a can of Irn Bru and Hannah as Dorothy from the Wizard of Oz.

Niamh’s parents met as teenagers working in the boat where her mum sold tickets and her dad was the deck hand. The boat continued to play a special role in the family’s life when her parents took the boat out to Inchcolm Island to get married.

The four gifted their £250 prize money to Maggie’s Centre.

Five things you need to know this New Year’s Day

The Loony Dook 2014 needs a sponsor