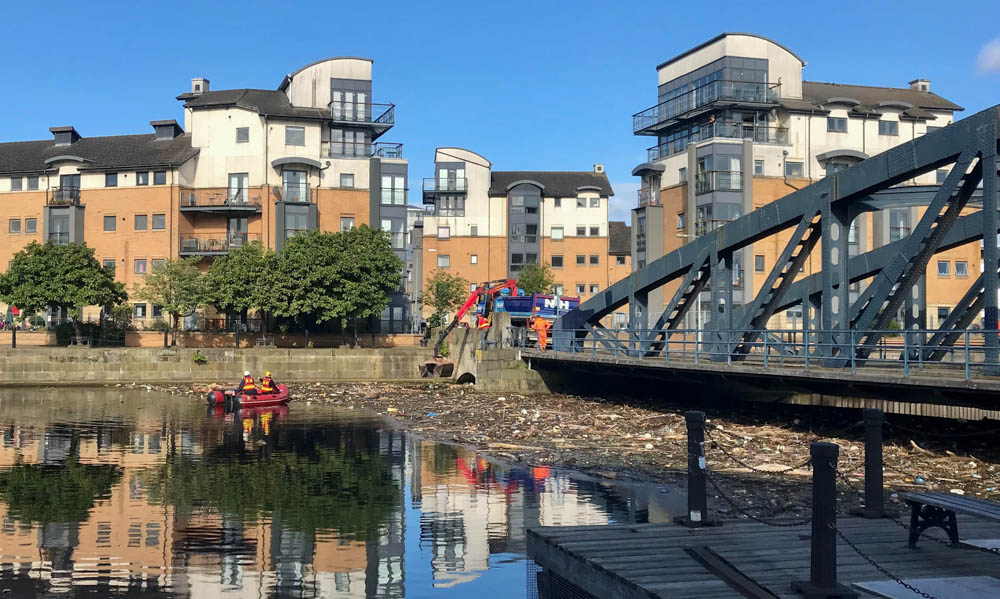 As part of this, a clean-up has been arranged for 11 December by the Council and Forth Ports, with prior work to be carried out by the WOLCT to remove as much litter and plastic waste as possible.

Council Leader Adam McVey said: “The build-up of debris in the Water of Leith basin is something local residents rightly feel very strongly about – it’s not only an eyesore, it poses a risk to wildlife. I’m very pleased we’ve developed this new management plan together with our partners to tackle the issue.

“Through joint collaboration and a positive, proactive approach we’ll be able to make a real difference to the look and feel of this fantastic and much-loved space.”

A high flow event in the Water of Leith on 24th June 2019 caused a significant accumulation of litter and debris to wash downstream and build up in the Basin areas of the river in Leith, particularly at the boom by Victoria Swing Bridge. This issue was of great concern locally and with landowners and stakeholders. In July, a contractor-managed clean-up was facilitated by Forth Ports and City of Edinburgh Council and, in August, a meeting of key partners was held.

This included Forth Ports, Water of Leith 2000, City of Edinburgh Council and Water of Leith Conservation Trust (WOLCT) Following this meeting, the WOLCT, supported by Friends of the Water of Leith Basin, undertook three trial clean-ups of the Basin areas to remove litter and plastic waste. It was clear from these trials that it was not possible to remove the natural woody debris but the clearance of plastic and litter, with the use of a boat and some specialist equipment, was possible.

Since then summer and autumn high water flow levels have meant a significant accumulation of debris has built up again. On 11 December, a clean-up has been arranged by City of Edinburgh Council and Forth Ports. This will remove the woody debris accumulated at the boom across the basin near Victoria Bridge.

Prior to this work volunteers with the WOLCT will attempt to remove as much of the plastic waste and litter as possible, so the woody debris can be used as biomass or composted at the waste treatment site. The disposal and processing of the waste will be arranged by the City of Edinburgh Council’s waste team.

Going forward the partners have drafted an agreement which will be taken to councillors, local organisations, land owners and stakeholders in the coming months to agree what will happen to the accumulations of debris in the future and in what time frame.

It is likely that WOLCT, supported by Water of Leith 2000 and City of Edinburgh Council, will regularly monitor the levels of accumulations at the boom and will arrange litter clearances as required. These are unlikely to be more frequently than once a month.

Should this work not be possible due to significant accumulations of woody debris then the City of Edinburgh Council and Forth Ports will be alerted and a contractor clean-up will be arranged and the boom cleared. The aim of the agreement is to agree a sustainable plan of action to tackle the ad hoc and severe accumulations.