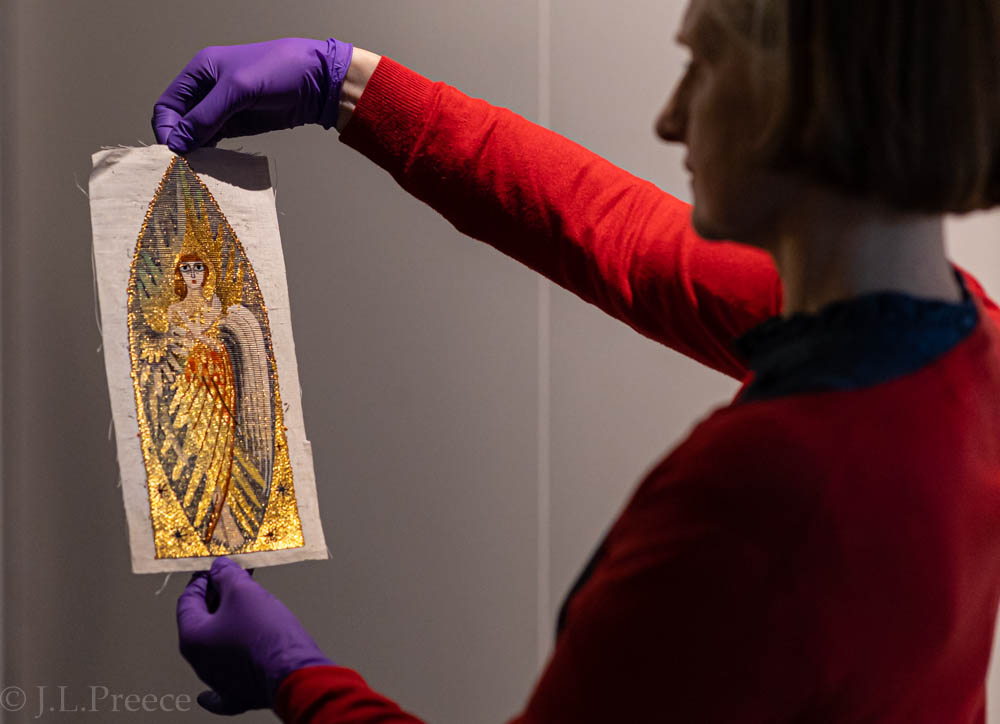 A remarkable archive of needlework that lay neglected in a cupboard for 50 years will be displayed at the University of Edinburgh over the next few months.

The historic collection – donated by a renowned thread manufacture and rediscovered eight years ago – features an eye-catching range of exhibits. These include charming embroidered birds, an elaborate Chinese headdress and the striking image of an angel adorned with gold thread.

Other highlights are the remnant of a 400-year-old Italian bed hanging, an ornate replica of a 19th century man’s wedding smock and a vibrant shroud dedicated to the patron saint of embroidery, St Clair.

All of the objects in ‘Touching Stitches’, which will be held in the University’s Main Library, were part of the Needlework Development Scheme (NDS), which now belongs to Edinburgh College of Art (ECA).

The NDS was set up by the Paisley-based yarn manufacturers, J&P Coats, in 1934 to improve design in embroidery. Coats made their global collection available to Scotland’s four art colleges as teaching aids.

The scheme was extended in 1946 to include schools. When it was disbanded in 1961, the collection was dispersed to the National Museums of Scotland, the Victoria & Albert Museum and the four art colleges.

ECA’s programme director of textiles, Lindy Richardson – a co-curator of the exhibition – has used the collection since 2011 to support teaching with students, as well as embroiderers’ guilds, refugee groups and prisoners.

The College has also consulted with the Royal National Institute for the Blind to create handling samples that can be enjoyed by visually impaired people. Examples of these 3D prints and enlarged digital replicas of original embroidery are included the exhibition.

Lindy Richardson said: “The NDS had a widespread impact on embroidery design and education in the 20th century. Handling, close analysis and practical exploration was always at its heart.”

Fellow co-curator Francesca Baseby said: “The exhibition puts the scheme in context, outlines its history and how we care for it, and showcases recent initiatives that have extended its influence.”