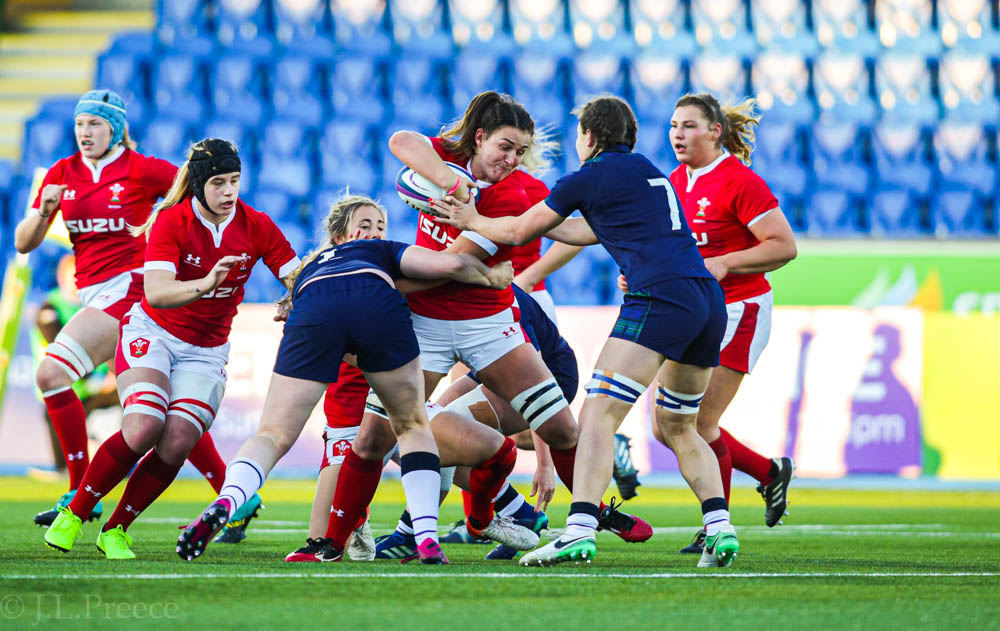 cotland had two Autumn International lined up at home for their women with Wales and Japan. The first of these was Sunday’s match against Wales, a match that also marked the competitive debut of the new coaching set-up.

From the off, Scotland pressed Wales hard in their half, keeping the vistors pinned and preventing much progress. After a few minutes of that, the Welsh were forced to kick to gain ground and escape.

However, Scotland were penalised for ‘not straight’ at the subsequent lineout, putting the Welsh on the front foot with a scrum. This early, packs’ encounter would be a significant pointer to how dominant the Welsh forwards were to be for the rest of the match.

A further scrum, won by the Scots this time, was wasted as another error gave possesion back to the visitors’ pack and lead to the opening try.

Just over 10 minutes in a penalty award was kicked to within a few metres of the Scot’s line and, ball won, the Welsh forwards steam-rolled their way to the try. The conversion fell short, but 12 minutes in, it was 0-5 to Wales.

Wales then went on to domiante the following 10 minutes and, although Scotland enjoyed brief periods of possession, they were always on the defensive and being pushed further and further back.

A series of penalties and handling errors during this time did little to help the situation and a second Welsh try was always hovering in the background.

And, just after 21 minutes, that background became the foreground as another attack by Wales went to the boot and a neat cross-field kick from Lauren Smith was gathered low by Lisa Neumann in the left-field tram lines and the winger then managed to avoid a tracking Chloe Rollie and squirm over for the second try. Once again, the kick fell short, but 0-10 was the score after 22 minutes.

The next 10, or so minutes, were far more evenly matched. Wales, probably still had the edge, but Scotland were looking far more dangerous than at any time before.

A clearing kick was grabbed out of the air by, possibly the best player on the field – when she had the ball – Rollie, and the full back made ground, setting up the best attack of the half for the home side.

Play was advanced down the right wing, before coming infield. A few phases later and Wales were penalised at the ruck, giving a chance for points. Almost 40 metres out, the tee was called for and Helen Nelson lined up and her fine strike saw the ball through the posts for 3-10 after 33 minutes.

The rest of the half was then, once again, fairly evenly matched, but was still was played more towards the Scotland end than was comfortable.

As the half drew to a close, however, Wales were pounding away at the Scots defence and winning penalties all along the line, one of which cost Emma Wassell a yellow for incorrect entry to a maul.

Down to 14, Scotland could do little to avoid the inevitable which came just on half time via a penalty try to leave the half time score at 3-17 to the visitors.

Starting the second half still with 14 players, Scotland soon lost Megan Kennedy with a serious leg injury, but a penalty and subsequent kick through, put the home side in a dominant attacking position, deep in Welsh territory.

However, it was all snuffed out when a loose pass was intercepted, bringing the attack to a close, but setting Wales up for more possession and territory.

A couple of Scottish substitutions around the hour mark shook things up a bit and the Scots put in their longest, and most dangerous looking, period of attacking play – Rollie, once again, being a driving force.

However, no further scoring was possible by either side and the Welsh ran out 3-17 winners of a match, in which, they were dominant in almost every sphere.

Their pack should take particular credit, as they had the Scots forwards under immense pressure for the whole match, only losing a couple of their own scrums due to errors on their part, with the majority of the rest going to penalties after pushing their opponents all over the pitch.

Were they aided by ‘getting away with’ early pushing? There’s a vague possibility… But, if that had been the case, then it was up to their opponents to get up to speed and mitigate for that. But they didn’t, so fair play to Wales. Excellent win.