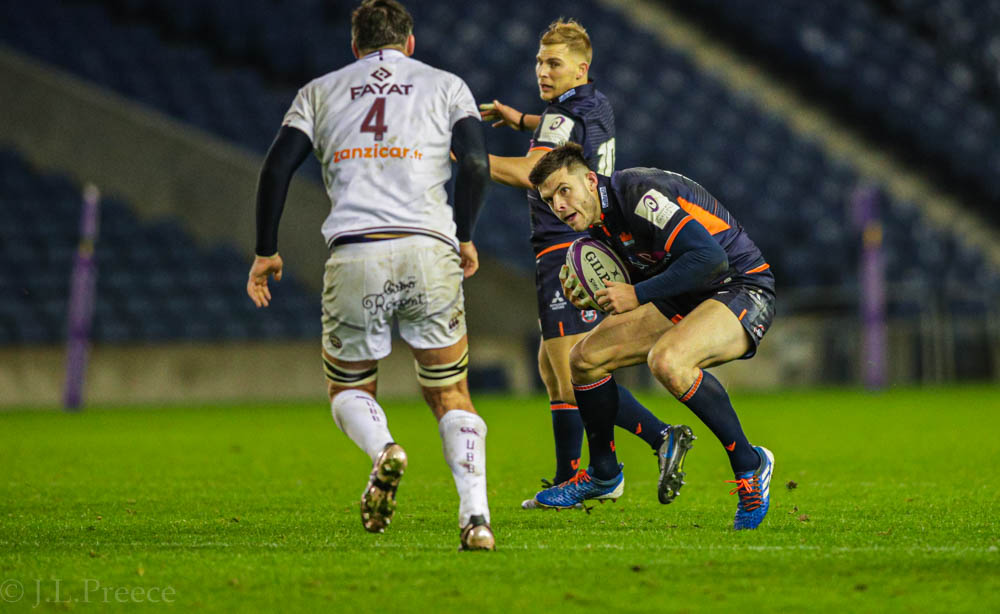 Following on from their bonus point, away, win at Agen the previous week, the second round of the European Rugby Challenge Cup saw Edinburgh facing another French side, this time at BT Murrayfield. Bordeaux-Begles were the team and they were also coming off the back of a win at home to Wasps.

The first period of the game was dominated by the kickers, with the ball seeing a huge amount of air time. When it was in hand, both sides, made the other work in defence, but neither gained a great deal of penetration.

Edinburgh were the first to get a chance at points following a penalty award for a breakdown infringement just outside the opposition 22. Jaco van der Walt then showed that he had put his previous BT Murrayfield – for him (he missed three) – nightmare behind him and slotted home the kick for 3-0 after 15 minutes.

The home side probably had the edge over the next 10, or so, minutes, but the visitors were always there, or thereabouts, to call a halt to any promising attacking play.

Van der Walt then had a second shot at goal around the 27 minute mark with a penalty from a scrum about 40 metres out. Once again, he split the posts with the kick and the home side went into the closing 12 minutes of the half, 6-0 ahead.

Then the ‘coach-killer’! Almost straight from the restart, Edinburgh gave away a kickable penalty deep in their own half and Bordeaux’s Matthieu Jalibert duly obliged for 6-3.

The French side then turned up the heat over the next five minutes, pressing Edinburgh back and forcing an occassional scramble to prevent a breakthrough.

However, the breakthrough, when it came, came the way of the hosts.

Grant Gilchrist collected turn-over ball outside the home 22 and got the ball rolling with a simple pass along the line to Pierre Schoeman, who then shovelled it on to Van der Walt.

In what turned out to be a classic, cross-pitch manoeuver, Matt Scott was next in line, then his centre partner Mark Bennett . Bennett then released Blair Kinghorn down the line and, with the best part of 50 metres to go, he evaded capture all the way to the five metre line.

A fine tackle from the French 10, Jalibert, stopped Kinghorn short, but the Edinburgh full back stretched out an arm and grounded the ball over the line for the try.

Van der Walt then kept the points ticking over with a superb conversion from near the touch line for 13-3 with five minutes left in the half.

If Richard Cockerill had any hair, he’d have pulled it all out as, once again, the home side gave away easy points just before the break allowing Jalibert to slot home a penalty on the stroke of half time for 13-6.

The first score of the second half was chalked up with just over 10 minutes played . Edinburgh were beginning to dominate play in the Bordeaux half, but a series of errors and turn overs kept the visitors in the game.

But, they blotted their copy book when they gave away a close-in penalty around 50 minutes which gave van der Walt another chance for goal which the South African duly took for 16-3.

Things then all swapped around as Bordeaux enjoyed a period of attacking play which would eventually lead to their only try of the match.

The hosts had had a couple of attacks snuffed out before the visitors took the matter in hand and pressed Edinburgh back, deep into their own half. With the defence scrambling to cover, prop, Ravai Kovekalou smashed through, then put his centre, Semi Radrada in the clear.

The huge Fijian then skipped past a couple of tackles to close in on the line. He was, like Kinghorn in the first half, pulled down short, but his momentum kept him on target and he scored under the posts for the try and 16-11.

Jalibert then converted for 16-13 with just under 20 minutes left.

Again there were restart woes for the receiving team when Edinburgh won a quick penalty, which van der Walt missed, then Duhan van der Merwe just failed to grab a chip through from Bennett near to the line.

With the score close, it wasn’t until the 78th minute that a scoring chance finally turned up. Unfortunately for the hosts, it was for the visitors. Jalibert stepped up and absorbed the pressure to draw the sides level at 16-16, with around a minute left to play.

Edinburgh had a last, desperate go at scoring, but Aroni Sau’s offload down the line went forward to Bordeaux’s Blair Connor who just stepped over the line to bring the, error-strewn at times, match to a close at 16-16.