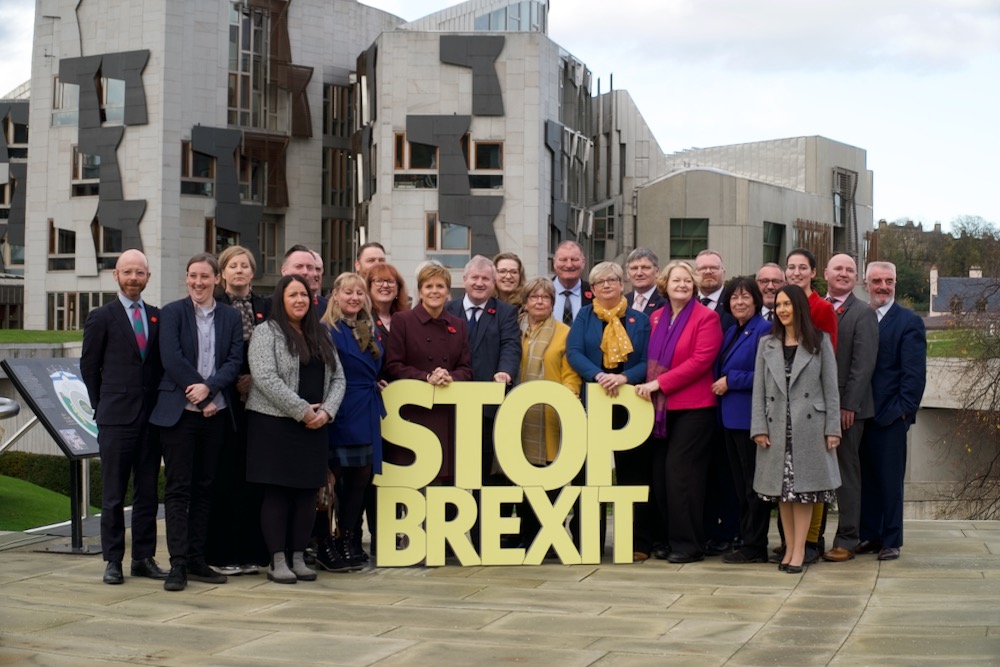 All the main TV channels were in attendance to hear voters being encouraged to vote SNP to put the country’s future in Scotland’s hands.

After a short introduction by Depute Leader Keith Brown MSP the First Minister talked for just over 10 minutes to a room full of journalists and photographers.

Here is what she said :

Welcome to the launch of the SNP’s 2019 general election campaign.

Every election is important.

But this one is the most important of our lifetimes.

The future of our country is at stake.

Not just for the next five years – but for the generations to come.

This election in Scotland is about who we are as a nation.

And who has the right to decide our future.

Over the last two decades Scotland has been on a journey.

We’re more European – literally – as thousands of our fellow EU citizens have made Scotland their home.

With the SNP in government, the principle of free education has been re-established.

We’ve put the progressive principle back into our tax policy.

And we are building a social security system with dignity, fairness and respect at its heart.

We’ve kept our NHS in public hands, protecting it from creeping privatisation.

And we have the best performing accident and emergency services in the UK.

Scotland is a world leader in renewable energy and the fight against climate change.

We’re on a path to becoming a zero emissions country five years ahead of the rest of the UK.

And we’re making our voice and our values heard in Europe and on the international stage.

So we’ve made real progress.

But there is much still to do.

As we look to the future we must build a more prosperous, sustainable economy so that everyone can get on in life.

We need to become a fairer and more equal society.

In short, we must continue the mission of building a better Scotland.

But make no mistake, right now many of the gains of the last 20 years and the promise of a better future are under threat.

Scotland’s vote to remain in the EU has been ignored.

The Conservative Party has ridden roughshod over the Scottish Parliament.

For the first time ever the UK Government has legislated on devolved matters without the consent of Holyrood.

With so-called ‘moderate’ Conservatives in full retreat and the hard-line Brexit ultras on the march, that is surely only a taste of what is to come.

The Tories’ number one pledge at this election is to take Scotland out of the EU against our will.

Now, I doubt there is anyone in Scotland who is not heartily sick of the Brexit nightmare.

But the Boris Johnson deal does not ‘get Brexit done’ – it just opens the door to the next episode of the Brexit horror show.

His Brexit deal covers the exit terms not the future relationship.

Ahead of us would lie many years of wrangling over the UK’s future economic relationship, justice and security arrangements, fisheries, migration and much more.

What we do know is that the Tories will take Scotland out of the Customs Union and Single Market, a trading block eight times bigger than the UK.

That will hit jobs and living standards hard.

Economic analysis says it will cost every person in Scotland £1600.

It will take away rights and opportunities.

And it will put Scotland at a competitive disadvantage to Northern Ireland, with no say over our future.

Under the Tory deal England will have voted to leave and will leave.

Wales will have voted to leave and will leave.

Northern Ireland will get a special deal.

Scotland – with the highest remain vote of any nation in the UK  – will be taken out of the EU against our will.

That is anti-democratic and unfair.

But that’s not the worst of it.

The Tories have set an impossible deadline to conclude trade negotiations.

That means in little over a year’s time there will be a renewed and very real risk of leaving the EU with no trade deal in place.

They want a No Deal Brexit. And on the present course that’s exactly what he will deliver.

As for Labour, Jeremy Corbyn still can’t tell us whether he is for remain or leave.

Instead Labour say they will negotiate yet another Brexit deal.

Just like the Johnson deal, a Corbyn deal would take Scotland out of the EU against our will.

And for the Liberal Democrats, despite all their talk, maintaining Westminster control over Scotland, even under Boris Johnson, is more important to them than maintaining Scotland’s place in Europe.

When it comes down to it the Liberal Democrats in Scotland are not the party of remain.

They are just another party of Westminster. They would rather subject Scotland to a Tory Brexit than give people in Scotland a choice over our future.

So Westminster’s priorities can be summed up in three words.

A vote for the SNP is a vote to escape Brexit.

A vote for the SNP is a vote to take Scotland’s future out of the hands of Boris Johnson and a broken Westminster system.

So just as we have done over the past three years, SNP MPs will work with other parties to stop the UK from being taken out of the European Union.

And if there is a hung parliament – an outcome that could give Scotland the balance of power – SNP MPs would seek to form a progressive alliance to lock the Tories out of government.

Our MPs will work with others to protect Scotland and advance a progressive policy agenda across the UK.

In particular, we will fight tooth and nail any attempt to expose the NHS to a post Brexit trade deal with Donald Trump.

That’s why after the election, SNP MPs will bring forward a new law – an NHS Protection Bill – to explicitly protect the NHS in all four countries of the UK from being a bargaining chip in future trade deals.

It would ensure that confidential discounts for expensive medicines would not be at risk.

And it would stipulate that, before any trade deal could come into force, the Scottish Parliament and the other devolved legislatures would need to give their explicit consent.

No new deal could be ratified unless the Scottish Parliament, National Assembly for Wales and Northern Ireland Assembly had agreed that the deal did not adversely impact their respective health services.

That is a concrete example of how the SNP will use our influence at Westminster – and any party that wants our support will need to match us.

Over this campaign the SNP will set out other priorities for our MPs in the next Parliament  – not just for Scotland, but for the benefit of the UK as a whole.

We will demand:- a real end to austerity with new investment to support public services and create opportunities for our young people; and an end to billion pound bungs to the DUP at the expense of Scotland and other parts of the UK;

– powers over migration so we can grow our population, not see it decline as a result of a hostile environment policy that harms our society and our economy;

– the immediate devolution of drug laws to allow us to better tackle the public health emergency we face;

– powers over employment law so we can protect workers’ rights and increase the living wage;

– real action on climate change – demanding that the UK goes further and faster and matches the scale of Scotland’s world leading ambitions;

– an end to the two child cap, the rape clause, and an end to the inequity of universal credit which is pushing so many families into poverty;

– no more nuclear weapons on the Clyde; and

– the right of the people of Scotland to choose our own future.

The SNP will always stand up for Scotland at Westminster.

And we will always stand up for the progressive values that so many across the UK cherish.

But after the last three years, it is impossible to escape the conclusion that for Scotland, Westminster is utterly broken.

It is taking Scotland down the wrong path – and it is doing so against our will.

Our place in Europe, the future of our NHS, the kind of country we want to be, should not be for Westminster to decide.

And it should certainly not be for a Tory government with no mandate in Scotland to impose upon us.

At this election, therefore, there is a fundamental question at stake for Scotland.

Who will decide our future: will it be Boris Johnson or the people of Scotland?

My intention is that the people of Scotland will decide Scotland’s future in an independence referendum next year.

The SNP already has a cast-iron mandate for an independence referendum, based on our explicit manifesto pledge for the 2016 Holyrood election.

So if the SNP wins this election in Scotland, the question should not be to me or to the SNP – what will you do if Westminster refuses?

The question must be to Boris Johnson and to Westminster – what gives you the right to block the democratic wishes of the people of Scotland?

That is an undemocratic, untenable and ultimately unsustainable position.

There can be no Westminster veto over Scotland’s right to choose our own future and build the kind of country we want to be.

The fact is Scotland is one of the world’s wealthiest countries.

We have talent and resources in abundance.

Nations of our size –  many with fewer advantages than Scotland – top the league for national income per head, wellbeing and happiness.

With our world-class universities, cutting-edge industries, vast green energy potential, and one of the world’s most highly skilled populations we should be entering a golden era for Scotland.

With independence, our country will thrive.

At this election, we have a precious opportunity to secure the right to choose that future.

So my message to the people of Scotland at this vital, defining election is this:

If you are sick of the chaos you’ve seen played out at Westminster on television night after night, vote SNP to escape Brexit.

If you fear the prospect of an increasingly extreme, right wing Tory Government under Boris Johnson, vote SNP to deprive him of the majority he craves.

If you despair at Jeremy Corbyn and his lack of leadership on Brexit, vote SNP to make sure Scotland’s voice is heard.

And if you believe that decisions about Scotland are best taken by the people of Scotland; that our future should be ours to determine, not imposed upon us by the likes of Boris Johnson –

And let’s get on with the job of building a better, fairer, European nation for this and the generations to come.