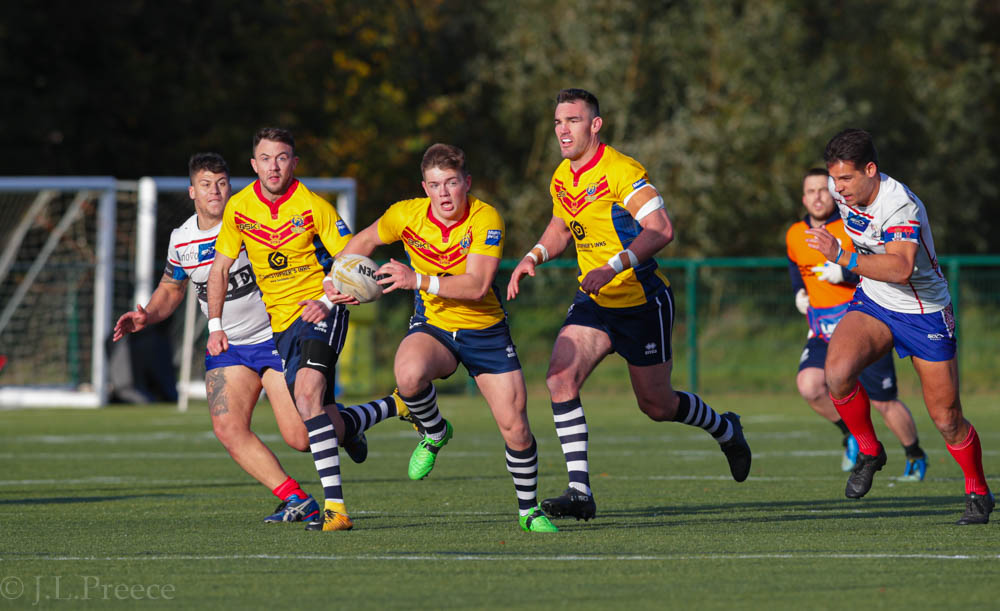 With the Rugby League World Cup due to be held in England in 2021, Scotland were keen to get their final group qualification hurdle off to a good start with a win over the visiting side to Glasgow’s Pollockshields Park, Serbia.
The top two teams from Scotland’s group, which also includes Greece, will qualify for the finals, which kick off with the group matches in a variety of stadiums in two years’ time.

The Scots, resplendent in their special ‘Lion Rampant’ inspired kit took advantage of a poor Serbian kick off to score off their first try, Will Oakes finishing in the corner after quick hands down Scotland’s left edge to score his first of the afternoon. More tries quickly followed in a whirlwind opening period; Ben Kavanagh burst through Serbia’s fragile edge defence to give Alex Walker a simple finish.

Kavanagh was again involved in Scotland’s next score, putting Oakes in for his second, after some measured build up from the impressive debutant Callum McLelland, who 5 minutes in had already caused multiple problems for the Serbians.

Ryan Brierley was next to find the try line in a brilliant solo effort, finding a gap in Serbia’s defence to sprint in from Scotland’s 40 metre line. Brierley then turned provider, playing a flat ball to Nick Glohe to stride in from close range.

With the score at 28-0 after 14 minutes, Serbia finally got a first touch of the ball following a rare Scotland error. The Serbians showed intent when carrying the ball; their pack flexed their running mettle down the middle, but the respite didn’t last for long, as Kavanagh again burst through to play David Scott in to score in the corner.

Shortly after Oakes completed his hat-trick and showed off his considerable pace, gathering the ball from a Serbian knock from his own 20 metre line to run clear. David Scott added his second try to make the score 44-0 after 23 minutes, when Serbia made a difficult job even harder for themselves, with Centre James Mirceski going into the sinbin for a high shot.

To Serbia’s credit, their best spell of the first half came when they were a man down, as their young half back pairing of Ben Stevanovic and Daniel Marjanovic both produced clever kicks to force three repeat sets of 6 for the Serbians.

However, Scotland’s own young half back, Callum McLelland scored from dummy half in the 34th minute. Shortly after scoring he again broke through the defensive line following a clever offload from Davey Dixon, allowing Brierley to walk over the line for his second try, bringing an end to what had been a marauding first half from the Bravehearts with the score at 56-0.

The second half was a more competitive affair, as the Serbian players came out with a renewed sense of purpose and vigour. With the wind at their backs they successfully forced Scotland to complete sets without scoring, showing more resilience and competitive edge than their first half performance suggested. Scotland took 7 minutes to add to their lead, McLelland making a break on half way to set up Alex Walker for his second try.

The Eagles continued to apply pressure though, testing the Scotland defence. After 10 minutes without a score Serbia couldn’t keep Scotland out any longer, with Ben Kavanagh getting a deserved score after strong running from Oakes on the left edge. Brierley continued to add the extras, converting a difficult shot from out wide.

The game took a sour turn on the hour mark, with 3 yellow cards in a minute, first for Serbia’s Ilija Radan for a late shot, before both sides lost their hookers seconds later, with Danny Addy and Rajko Jankovic both going into the bin for an off the ball incident.

The extra man quickly told for Scotland though, Ben Hellewell going over in the corner after more good work from McLelland, who managed to wriggle away from multiple defenders to leave an overlap on the right edge.

Moments later David Scott became the second player to complete a hat trick, and in doing so the Centre equaled Mick Nanyn’s try tally to become Scotland’s joint-record try scorer. Dan Turland added the final gloss to the scoreline, bustling over from short range to register his first score in a Scotland jersey. Brierley added the extras with a 13th successful kick out of 15 to finish off the match with an impressive 86-0.

Brierley’s 34-point contribution in the match would normally make the scrum half an obvious choice for Man of the Match, as perhaps could Kavanagh’s brilliant performance from second row. But, in a game where two players registered hat-tricks, the man of the match award went to Stand-Off Callum McLelland.

On his Scotland debut McLelland controlled the left flank with aplomb, and was a constant thorn in the Serbian defence, regularly breaking through to give Scotland good field positions to capitalise on. The Leeds Rhinos’ youngster showed maturity beyond his years, and is an exciting prospect for Scotland fans.

Scotland head coach Nathan Graham was impressed by his side’s clinical finishing, but acknowledged that intensity was lacking in the second half.

“We began really well, we were unsure about the quality of their squad knowing that they had several heritage players, and it was a bit uneasy in the changing room beforehand. But our start to the game was amazing, completing the first six sets and scoring a try off each one, which effectively won the game and helped us settle down”.

It was a resounding win for the Bravehearts, but more importantly, it was a huge step towards qualification. The next step? Greece vs Scotland, next Friday in London.