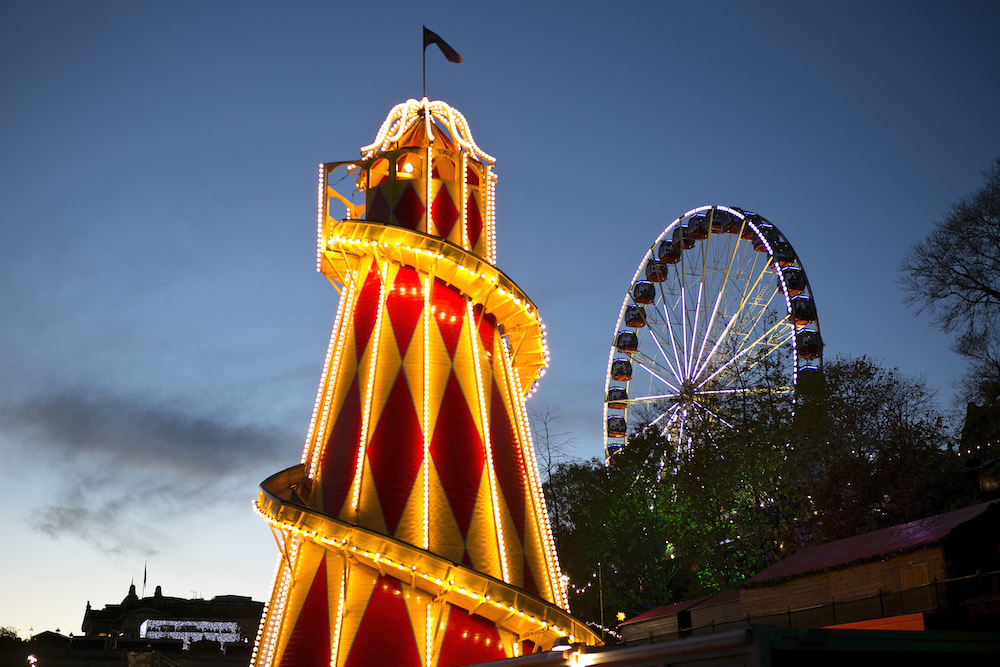 Christmas has all kicked off on Twitter, even though we have yet to mark Halloween, Guy Fawkes or even Light Night which begins the festive season in Edinburgh.

Underbelly has started to build the Christmas market in Princes Street Gardens and the scale of what will be there from mid November until January has alarmed some of those keeping a close eye on the garden.

But the question is should we be alarmed? The survey carried out after Christmas last year shows that most people who visited Edinburgh’s Christmas would recommend the event to others. The organisers reported on positive figures for both of our festive season events, and the council told us in June 2019 they were extending their arrangements with Underbelly. They also promise to conduct a review of festive season arrangements over the next eighteen months.

This scaffolding structure,from the NGS lower entrance into the gardens is the 'new' Underbelly’s Xmas Market – taking over an area where there were previously no Xmas Market stalls. Is this a wake up call to everybody ?

EPSG now belongs to the CEC and Underbelly……… https://t.co/gHLCpqxGqs pic.twitter.com/31AX40Vxw6

We asked Underbelly what is happening at the moment in the gardens. We have been told that the build programme is in line with previous years – at least with regard to timing. They admit that there will be 12 more stalls this year than last making a total of 163 this year.

Last year there was an element of overcrowding. Perhaps mindful of that, the organisers will use a slightly bigger area in 2019. A spokesperson for Underbelly explained : “The expansion into the south side of East Princes Street Gardens gives visitors to the market more space, especially on busy weekends.”

Underbelly is commissioned by The City of Edinburgh Council to produce and oversee the events which make up the Edinburgh’s Christmas programme. Part of the revenue from the Christmas contract helps to fund Edinburgh’s Hogmanay. Income from Edinburgh’s Christmas has also funded improvements to visitor services at the Scott Monument and City Art Centre, delivered the city’s Festivals and Events programme, supported the Burns & Beyond Festival (which will return this year) and has supported the seven-day operation of the city’s museums and galleries.

So what are the figures?

Last year 771,000 Edinburgh’s Christmas tickets were sold with 8 out of 10 people saying afterwards they would be very likely to recommend the event.

It is not entirely clear from the report (which deals with both events interchangeably) how much Edinburgh’s Christmas alone costs the council, although it states that the ‘expenditure budget’ for Hogmanay has been held at £4 million. We can only take the organisers’ word for it that the cost to the public purse for both events is decreasing.

But elsewhere there is provision for a ‘set fee’ to be paid by Underbelly to the council in relation to Christmas. When Underbelly won the contract in 2017 they decided that Christmas did not need subsidising. (The council does pay Underbelly to run Edinburgh’s Hogmanay for them)

The figures which are made clear in the report confirm that last year was the most popular yet for Edinburgh’s Christmas with almost 1 million people registered at Edinburgh’s Christmas events in the city. 15,000 people attended Light Night on George Street and there were ‘community benefits’ too.


The Community Benefit was calculated at £534,000 – (they arrive at this by calculating the spend on artist programming, infrastructure, staffing, free tickets and charitable donations raised at events).

Edinburgh’s Christmas took part in St Andrew’s Fair Saturday 2018 – a project delivered in a partnership between The Scottish Government and the Fair Saturday Foundation. All proceeds from Silent Light on 24 November 2018 supported 3 charities – Deafblind Scotland, National Deaf Children Society and Royal National Institute of Blind People raising £14,168.40 for the charities.

Box office and charity bucket collections including those at Light Night raised £12,044 for the National Society for the Prevention of Cruelty to Children (NSPCC).

Edinburgh’s Christmas teamed up with Trussell Trust food banks once more last year, highlighting the need for such contributions in the dark winter months. Through the donation stall at Edinburgh’s Christmas 222.3kg of food and non-perishable items was gathered for the Edinburgh Food Project.

Alongside this £1,000 was raised in financial donations and Edinburgh’s Christmas gifted 12,000 free tickets to Trussell Trust food bank users.

In September 2019, (in accordance with their announcement in June) the council extended and aligned the Christmas and Hogmanay contracts for a period of two years – 2020/21 and 2021/22.

This was conducted under the terms of the 2017 contract, and both contracts will therefore come to an end at the same time in March 2022 – which will allow a period for review. This move was approved under delegated authority at a meeting of the Culture and Communities Committee on 10 September 2019 in response to a report tabled by Executive Director of Place Paul Lawrence.

The Executive Director of Place has the authority to agree the terms of such contracts on behalf of the council. These functions are part of his remit under the council’s 2019 Scheme of Delegation :

approving, subject to compliance with any approved scheme of charges, the use by appropriate organisations, bodies or persons of land and premises owned, occupied or managed by the Council (including land managed on behalf of the Common Good)

approving in accordance with conditions considered appropriate to individual applications, and in accordance with Council Policy, all requests from organisations to make use of parks and recreational areas, subject to consultation with:
(a) the Convener or vice-Convener of the Transport and
Environment Committee;
(b) the Festival and Events Champion;
(c) local ward Councillors;
(d) as appropriate, other Council service areas; and/or
(e) as appropriate, Lothian and Borders Police (or its successor) and other emergency service

When the contract was first agreed (in 2016/17) Underbelly said it would deliver an event of equivalent scale to previous arrangements – but at a lower budget. The company also agreed to spread the events throughout the city centre and confirmed they would work to ensure that Edinburgh maintained its ‘destination status’.

During the redevelopment of East Princes Street Gardens by National Galleries of Scotland it became clear that there might be changes to the space available for the event. Underbelly say they have made what they call ‘significant’ capital investment to ensure they could deliver what they had agreed to in terms of the contract. The galleries have formed a new footpath there to improve accessibility.

Now that the contracts have been redrawn there will be a further redrafting of all the terms and conditions after a period of review.

A public consultation is proposed to seek out alternatives to the current arrangements and the council will ask for bids from other producers during the procurement process.

Underbelly agreed 22 Key Performance Indicators with the council and reports regularly to them throughout the year. These are listed on the final page of the September 2019 report to Culture and Communities which you can read below.

Cllr Osler asked at the September committee meeting why the KPI targets appeared to be so low and was advised that these had been tied to historical figures. ie those in place when the first contract was agreed.

It was also explained that the contractor Underbelly had also offered some figures on which basis the contract would be profitable or sustainable. These figures are low in comparison with the actual figures achieved.

At the same meeting Cllr Staniforth mentioned that the KPIs depend greatly on financial benefit, and while he understood that the basis for them could not be changed at this point he asked for assurance that they could be altered when a new contract is agreed in 2022. He would like KPIs which mention cultural benefits rather than purely economic ones.

Data produced during the years when Underbelly has organised the events will also be used to frame the contract next time round.

The next eighteen months will be used to consider the festive events and have a think about ‘what exactly we will need’ according to Culture and Communities Convener Councillor Donald Wilson. He said : “We should embrace that with some depth.”

Councillor Lewis Ritchie feels that this development is too large. He said this on Twitter

Some tough questions for @Edinburgh_CC over whether development of this scale is in the public interest. An Edinburgh Christmas market isn't a bad thing per se, but this is a wholesale commercial takeover of common good land. Its gone too far – Edinburgh's citizens deserve better https://t.co/YcHCa1E4ck

City Centre councillor Jo Mowat asked who knew about the scale of increased infrastructure and who had seen what was involved. She questioned if there was any democratic oversight and briefings or consultation.

It seems clear to us that there was none, as the agreeing of these contracts under delegated powers would not have needed any of that.