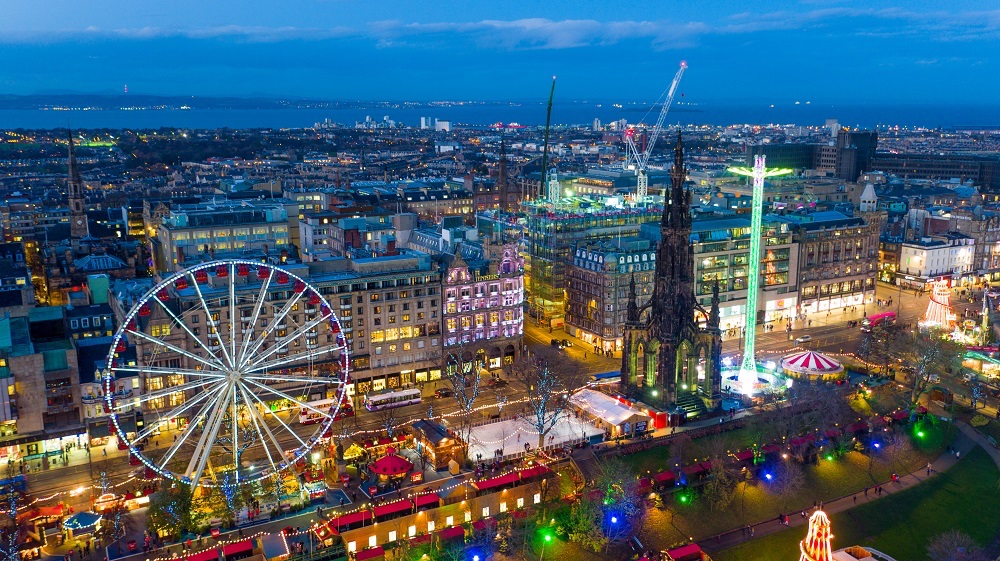 The Christmas season begins in November in Edinburgh with Light Night on 17 November 2019 in the Old Town.

The day of festivities involving the community will also include a flying visit from Santa.

Underbelly is commissioned by The City of Edinburgh Council to produce and oversee the events which make up the Edinburgh’s Christmas programme. Last year 771,000 tickets were sold with 8 out of 10 people saying they would be very likely to recommend the event.

There was a lot of discussion in 2018 about the Silent Night event, a silent disco under a light display on George Street. It was a little quieter than the thrilling ride which occupied the same space the year before. That resulted in most people riding on it screaming at regular intervals, but some complained about the noise from the so-called silent disco too.

So what can you expect this year? Well, the venue for Light Night (which really takes place during the afternoon on 17 November) has moved to the Old Town.

On The Royal Mile you will find choirs and youth groups previously sited on stages on George Street from 3.30 till 5.00pm. There will be three giant screens at key points on the street for you to watch and listen to the choirs before a pyrotechnics display on the Royal Mile at 5 o’clock. This will not be the same as the fireworks from previous years, but still promises to be a spectacular sight.

The Christmas event is intended for Edinburgh residents who can use their postcode to get a 20% discount off their tickets. Last year the charitable donations from the tickets raised almost £30,000 for OneCity Trust which is the Lord Provost’s charity.

The event will be hosted by Forth 1’s Arlene Stuart and others involved will include the Royal Lyceum Theatre Edinburgh’s community choir, Edinburgh singing group for 4-16 year olds Little Voices, Big Stars, Intercultural Youth Scotland with rap and poetry and Rock Choir Live.

Charlie Wood and Ed Bartlam, producers of Edinburgh’s Christmas said: “We’re delighted to be returning with our seventh season of Edinburgh’s Christmas. The nearly 300,000 unique visitors from Edinburgh and the Lothians in 2018 show what a popular local event it is but it’s also the time of year when the city welcomes in hundreds of thousands of visitors and, once again, we’re able to provide them with one of the best Christmas celebrations in Europe.

“We’re particularly excited to be able to introduce Community Christmas to twelve different locations across Edinburgh, bringing communities together locally to celebrate Christmas and also to officially start the celebrations on the Royal Mile with Light Night and a very special appearance from Santa Claus.  Merry Christmas!”

Edinburgh’s Lord Provost, Frank Ross, said: “There is simply no better place to celebrate Christmas than Scotland’s capital. And, with 20% off ticket prices for EH postcode residents and a brand-new event celebrating 12 of our local communities, this winter will see Edinburgh’s Christmas cheer spread even further across the city.

“The Festival is a chance for us to celebrate our local talent and creativity and I’m looking forward to the launch of our city’s Christmas with Light Night providing a stage for so many local performers.  Alongside this, budding young artists will have the chance to showcase their work with Winter Windows, the Christmas markets will be awash with Scottish produce, and this year we will have sensory backpacks available free of charge to make the visit to the festival more accessible for people with autism or who have difficulty processing sensory information.

“Importantly, the events will yet again help us raise much-needed funds to tackle poverty and inequality. As the charity’s patron, I’m delighted to see Underbelly continues its partnership with the OneCity Trust.”