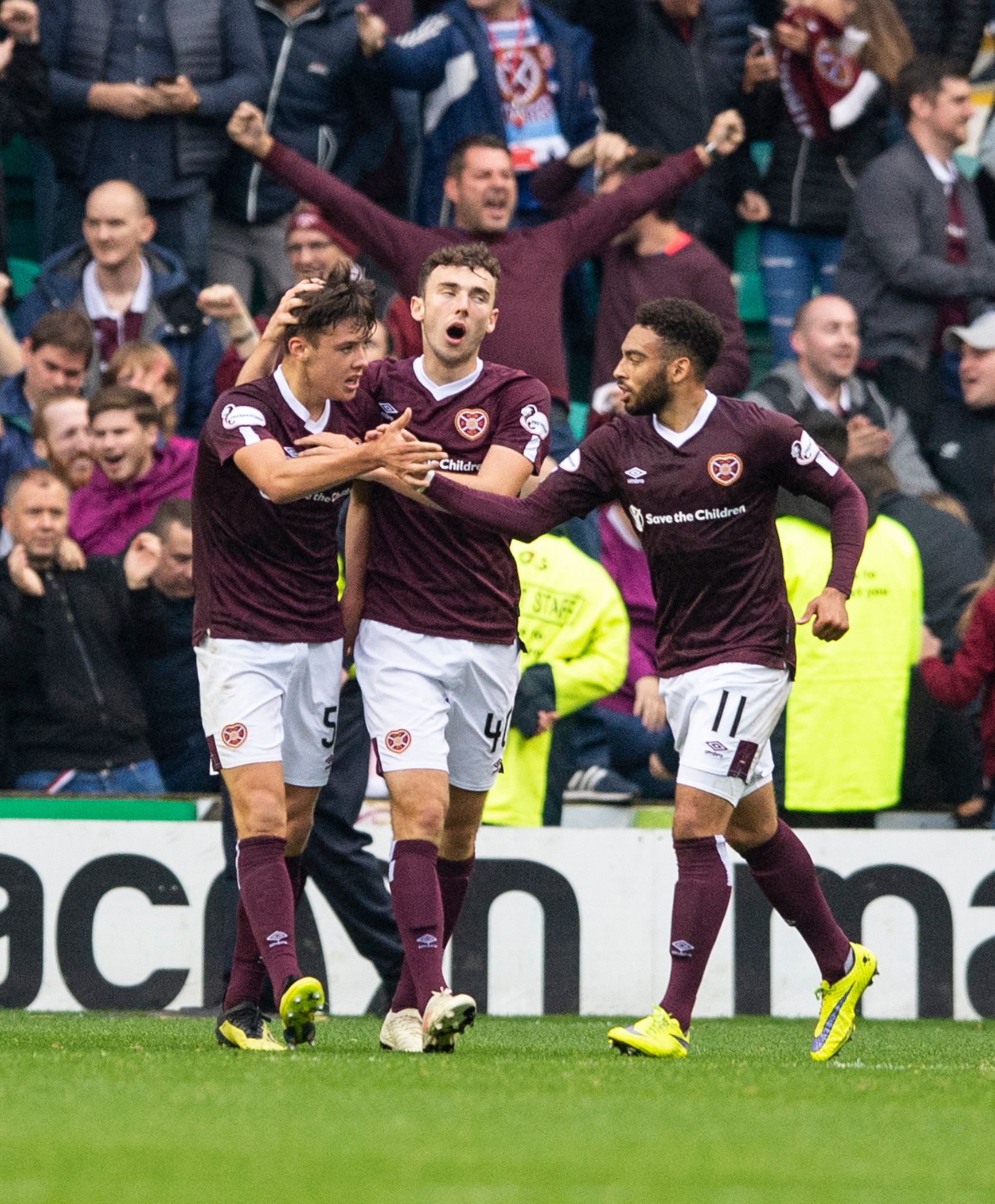 17-year-old Aaron Hickey scored a stunning goal to secure Hearts first league victory of the season and see them leapfrog Hibernian in the Ladbrokes Premiership table. The Maroons fell behind to another stunning goal from Hibs Stevie Mallan early in the second half but goals from Uche Ikpeazu and young Hickey brought much-needed joy to the Gorgie Boys in what has been a troubled season.

Both Edinburgh clubs entered the first capital derby of the season in poor form – Hibs have won only one league game this season while Hearts had not registered a league win in six months. Despite this, there was close to a full house at Easter Road to see the old rivals slug it out.

And slug it out they did in what was, quite frankly, an awful first half. Hibs had the first decent chance in the seventh minute when slack play from Sean Clare allowed Mallan to pass to Daryl Horgan. The Irishman returned the ball to Mallan, but his effort was deflected by Glenn Whelan.

It took Hearts half an hour to record their first attempt on goal when Hickey’s cross was headed over by Sean Clare.

If truth be told the first half wore the look of two drunken old men fighting it out to hail a taxi.

The second half could only get better. And it did immediately from a Hibs point of view when poor defending from Hearts allowed Stevie Mallan the room of Easter Road and a fair proportion of Leith to fire in a wonderful strike from 30 yards into the top corner leaving Hearts keeper Pereira helpless. Mallan has earned a reputation for scoring long-range efforts so quite why the visitors didn’t close him down is anyone’s guess.

The home support were on great voice now and they had chances to double their lead, particularly Melker Hallberg who found himself inside the Hearts penalty box and, with time and space to spare, sclaffed his shot well wide of goal when it seemed easier to score. It was to prove a costly miss for the Hibees.

With twenty minutes to go Hearts scrambled an equaliser. From a short corner on the left, Jake Mulraney slipped the ball to Meshino who dinked the ball into the Hibs penalty box. Christophe Berra headed it to Ikpeazu who used his strength to great effect before sliding the ball beyond Hibs keeper Chris Maxwell and into the net in front of the joyous Hearts support.

The goal changed the dynamics of the game and it was all Hearts now. Hickey and Meshino were linking well and the Japanese man curled a shot which was just inches over the bar. Irishman Glen Whelan was next to try his luck, but his effort was well wide.

Hibs seemed caught between trying to hang on for a point or going for a win.

With just seven minutes left, Hearts took a sensational lead. Again, Meshino set up Aaron Hickey and the teenager wearing the number 51 shirt fired in a brilliant shot which took a deflection off Vela before soaring into the roof of the net. The youngster set off to celebrate with the dancing Jambos in the away end.

Hibs knew they had to respond, and Jason Naismith headed wide before substitute Glenn Middleton forced Hearts goalkeeper Pereira into a fine save. Pereira then saved from Scott Allan before Doidge thought he had grabbed a late equaliser for the home side only for referee John Beaton to correctly adjudge the Hibs striker had used his hand to scoop the ball from the Hearts goalkeeper and into the net.

The game ended soon after and Hearts celebrated their first league win of the season while Hibs were left to contemplate another derby loss – and the future of manager Paul Heckingbottom.

Craig Levein was naturally delighted after the game

“We handled it today and didn’t make mistakes which have been hampering our previous league games. We restricted Hibs to very few chances, but when they scored I thought it might not be our day, but the boys plugged away.”

“I thought Ryo Meshino was fantastic, he gives us something completely different and he’s very brave. He’ll take the ball anywhere and his first thought is to create or score, and Glenn Whelan put on a midfield masterclass today. And Hickey got his goal wearing the number 51 on his back so it wasn’t bad at all!”

Top man: Well, he’s very nearly a man (he is too young to drink the bottle of champagne given to him after the match!) – Aaron Hickey