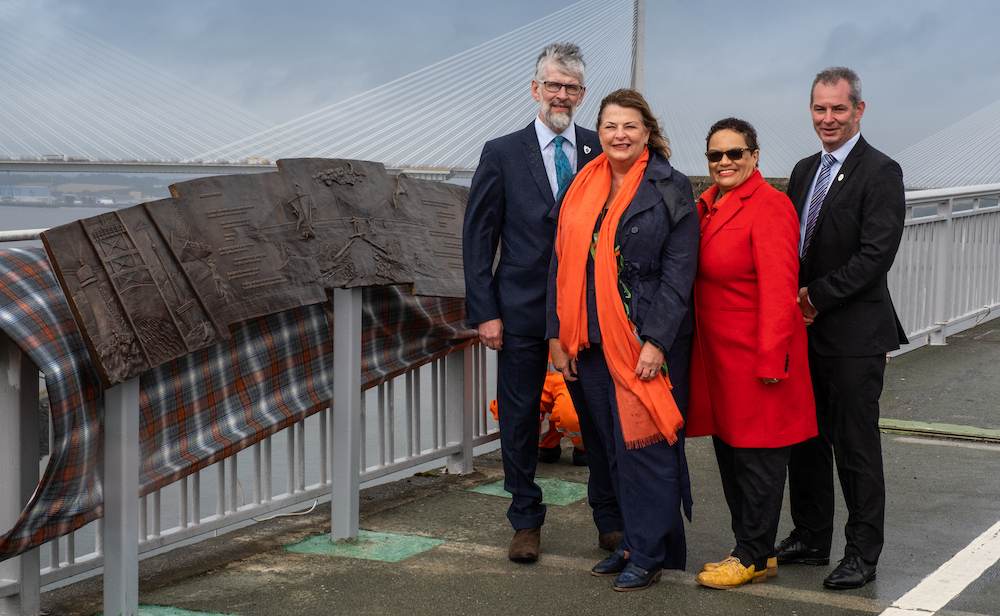 The work was specially commissioned by The Scottish Government and Transport Scotland and it includes a poem written by the Makar Jackie Kay.

Bridge of Pages is the work of local artist Gordon Muir and is situated on the Forth Road Bridge west footpath. This location, a vantage point on to the Queensferry Crossing, will be a permanent home for the work.

The 3.5m-wide plaque represents five pages of a book with illustrations of mythical and historical characters from the area, alongside scenes from the Queensferry Crossing’s construction. These were hand sculpted in clay before being set in bronze.

The poem, which was read out by the Makar at the Queensferry Crossing opening ceremony in 2017, has also been set in braille along the bottom of the work.

Ms Hyslop said:“This fantastic piece of artwork will allow walkers to enjoy the Queensferry Crossing poem while taking in the spectacular views of the new road bridge. The Queensferry Crossing is a breathtaking example of Scotland’s world-class engineering projects, and as our national poet, Jackie Kay is the perfect choice for the work.

“The Queensferry Crossing poem has been an important part of the bridge’s journey, having been read out at the opening ceremony, so it is fitting that it will now be installed as a permanent tribute to be enjoyed by people for generations to come.”

Ms Kay said:“It is a huge honour to have a poem on the bridge. I am particularly excited that this is one of the few public poems in the world to be in braille. It is funny to have a poem that will outlive you. I think the Queensferry Crossing is a magnificent sculpture.”

Artist Gordon Muir said:“As a poetry-loving ‘brigophile’ I was super chuffed to be working with Makar Jackie on this tribute to the new Queensferry Crossing, another shining example of Scottish engineering.”

Mark Arndt, Account Director for the Forth Bridges operating company Amey, said:“We’re delighted to have played a part in bringing together poetry, art and engineering for this apt and timeless celebration of the Queensferry Crossing. The artwork’s unique setting high on the Forth Road Bridge footpath is the perfect place to appreciate these words and images cast in bronze. I’m sure they will be enjoyed by many generations of locals and visitors alike.”