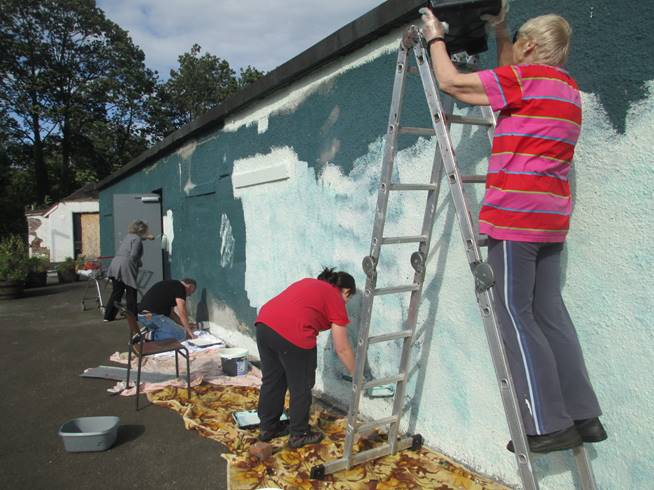 Early this afternoon the Rt Hon Lord Provost will preside at the “Armoury” in Edinburgh’s Roseburn Park, to reveal a mural painted by Zap Graffitti Arts.

The mural created with the help of locals will celebrate the work of Second World War volunteers. The launch coincides with the 80th anniversary of war being declared in Sept 1939.

Roseburn Park (by Murrayfield Stadium) is so central to the city that during the war it became the location for the city’s Air Raid Protection against Nazi bombs. Germany dropped over 650 bombs on Edinburgh and the surrounding area and the “Armoury” was built at the beginning of the war to keep us safe. The name was an anomaly, for in reality it housed not weapons, but the volunteers of the City’s civic defence force. Its central location, combined with its easy access from all directions by bicycle, made it the easiest place to get to by messenger youths, sporting a steel helmet, cycling at speed, to relay paper messages from any bombsite in the city, to the older civil defence volunteers, who then co-ordinated the emergency services of ambulances and fire brigade.

The commemorative mural has been developed over the past six months by Friends of Roseburn Park (FoRP), a charity which improves and promotes the park. It is inspired by a short propaganda film made during the war called “The Message Must get Through” that illustrates the teamwork of the messenger youths and older men and women inside the Armoury, volunteers who worked in reserved occupations or who were too old to be called up to join the armed forces.

The mural came about when FoRP set out to brighten up their windowless building, which now accommodates them, along with Roseburn Primary School football team, the Murrayfield DAFs Cricket Club and the Edinburgh Wanderers Rugby Club. The Armoury was recently awarded Grade B listed building status on account of its unique heritage – for it is an extremely rare surviving example of a WW2 civil defence construction. It already sports, on one wall, a FoRP mural celebrating the diverse users of the Park. That mural too, was painted by Zap back in 2009, with help from local children.

The charity set out to involve both old and young and held two local screenings of the film earlier this year. Many residents participated in the June design workshop and on earlier this week they were joined by pupils from Roseburn Primary, Tynecastle High and Craigmount High schools to paint the mural, under the guidance of international artist Kieran Gorman from Zap.

The launch event coincides with FoRP’s annual bake-off, where locals compete to produce the prettiest and tastiest cakes. Usually a couple of hundred people attend this annual fundraising event, which helps fund FoRP’s work throughout the year. It has in the last decade arranged  the other, earlier mural (also with Zap), the installation of all-weather ping-pong and chess tables, a decorative log bench, consulted and supported the new children’s play park, run annual baking competitions and fun days, planted new trees and flowerbeds – and bulbs too numerous to count.

The new mural was funded through a Council grant from the “Local Event Fund” and has involved local residents in its design through screenings and workshops. Last weekend 7 volunteers painted the base coat for the forthcoming mural, a design is now in place and will be unveiled later today in a ceremony at 2.00pm.