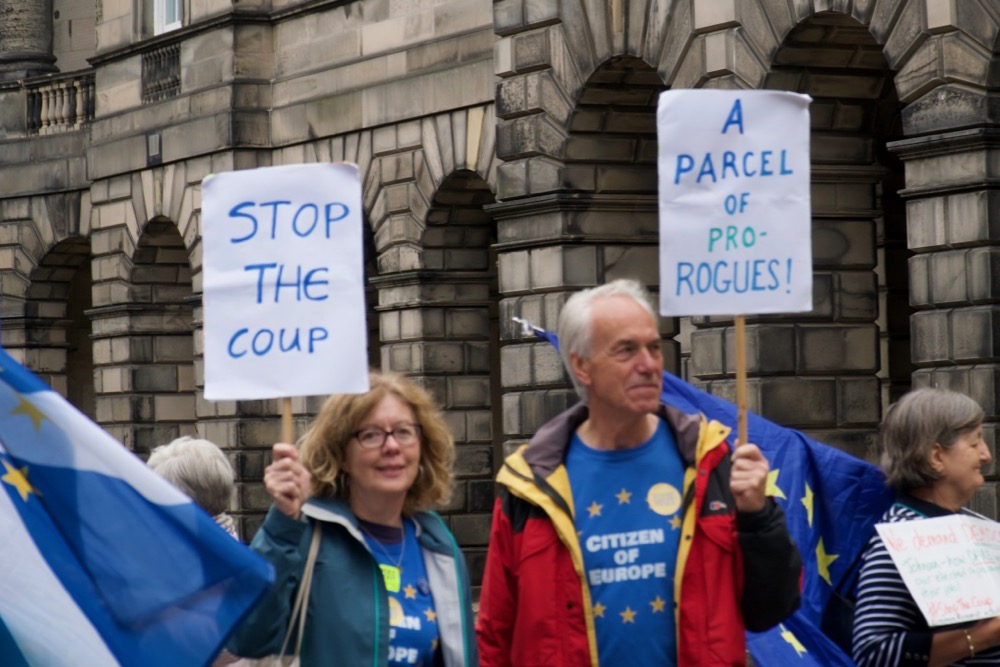 There are campaigners from European Movement in Scotland standing quietly in the courtyard outside. They say they are supporting the efforts to ‘stop the coup’.

The lead petitioner is Joanna Cherry QC MP for Edinburgh South West along with Jolyon Maugham QC and the petitioners are represented by Aidan O’Neill QC.

The Lord Advocate James Wolffe QC who is the top legal officer in Scotland has been allowed a role in the hearing.

The most interesting facts which have emerged in evidence this morning are these :

The Prime Minister Boris Johnson has refused the opportunity to make a sworn statement of his evidence on why the government chose prorogation as its route. Mr O’Neill has said that adverse inferences from this must be drawn

It appears from evidence produced this morning that the Prime Minister was considering prorogation of Parliament on 15 August at a time when the UK Government was saying it was an academic matter.

There is a handwritten note by the Prime Minister suggesting that the September parliamentary session is a ‘rigmarole’.

The allegation is that UK counsel misled the court. Prorogation is normal at this time of the year when there are party conferences, but a suspension of parliament at this particular time and for so long – five weeks is unprecedented – is not normal.

There are several Twitter accounts to follow to keep up to date with the coverage and we would suggest this is an impartial one you might read as a start (many others are available!) :

Live cameras recording in the court room (perhaps first ever live feed at COS?). Court founded back in 1532 by an act of the old Scottish Parliament, Scotland’s highest civil court. pic.twitter.com/6gKl076UYG